Resources derived from the nature and used by humans are called Natural resources such as land, soil, water, plants, wildlife, mineral and power resources.

Land is an important resource. It provides for more than 95 percent of human food requirement, greater part of clothing and housing and all needs of wood for both fuel and construction. Plain 43% Net Sown Area (NSA) 54% of Plain Mountains 30% Plateau 27%

Physical factors such as topography, soil, and climate, availability of water and mineral resources determine the probable use of land, for example fertile plains are used as croplands, occurrence of mineral deposits favours mining, in densely populated areas land is used for other human requirement like buildings, houses, roads, rails etc.

Land use pattern of few countries of the world 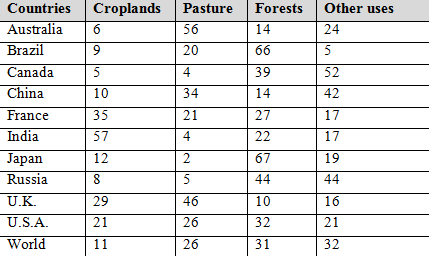 The above table shows -

People and their demands are ever-growing but the availability of land is limited. The quality of land also differs from place to place. People started encroaching the common lands to build up commercial areas, housing complexes in the urban areas and to expand the agricultural land in the rural areas. Today the vast changes in the land use pattern also reflect the cultural changes in our society. Land degradation, landslides, soil erosion, desertification are the major threats to the environment because of the expansion of agriculture and constructional activities.

Growing population and their ever-growing demand has led to a large scale destruction of forest cover and arable land and has created a fear of losing this natural resource. The same piece of land has to be distributed among various uses i.e. construction of buildings, roads, railways, and grazing grounds.

So land use must be planned properly to provide best results. Careless use of iand may create serious problems such as - shortage of croplands, soil erosion Therefore, the present rate of degradation of land resources must be checked. Afforestation, land reclamation, regulated use of chemical pesticide and fertilizers and checks on overgrazing are some of the common methods used to conserve land.