Some natural phenomenon of Class 8

Lightning is a giant spark. A single stroke of lightning can heat the air around it to 30,000 degrees Celsius (54,000 degrees Fahrenheit)! This extreme heating causes the air to expand at an explosive rate. The expansion creates a shock wave that turns into a booming sound wave, better known as thunder. This explains why it has the name thunderstorm.

Thunder and lightning occur at roughly the same time, although you see the flash of lightning before you hear the thunder. This is because light travels much faster than sound.

During a thunderstorm, thunder and lightning occur together. But we see a flash of lightning first and hear the number of thunder after few seconds. The time difference that we sense is due to the speed at which sound and light travel. Light travels so quickly (about 300, 000 kilometres in one second) that we see a bright flash of lightning instantly. Sound, on the other hand, travels much more slowly than light- at about 340 m/s through air. Therefore, we can see light in an instant, but it takes a while to hear thunder.

During a storm, wait until we see a flash of lightning, then start to count slowly. For every count of three, the storm is roughly one kilometre away. If we see lightning and hear thunder at just about the same moment, watch out. The storm could be right above us, only a few hundred feet away.

An electric spark is an electric discharge (i.e. flow of electric charges) through air, vacuum or any other gas. We would have seen these sparks at electric switches. Switch off all the lights at night and then observe the switch closely when we switch off the fan switch. We will most likely see a small flash of light. This is an electric spark. This is due to the charges jumping across the small gap formed when the switch is being turned off. Lightning is one example of a huge electric spark in the atmosphere.The flash of light that we see is due to the air molecules being heated up to very high temperatures.

Lightning always follows the easiest path. Lightning strikes buildings or projecting objects such as trees, poles, wires or building than larger, flatter surfaces because the material in them provide easier paths to the ground than the other. The primary target of lightning are lone buildings. 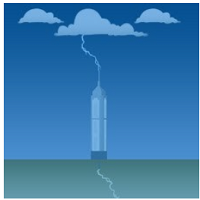