Chemical Reaction And Equation of Class 10

Those reactions in which a single substance (reactant) splits up into two or more simpler substances (products) are known as decomposition reactions.

These reactions are carried out by supplying energy in form of heat, electricity or light which breaks that substance into simpler substances.

Types of decomposition reactions are:

The reactions involved are:

Ex 2. Thermal decomposition of Potassium Chlorate: When potassium chlorate is heated in the presence of manganese dioxide as a catalyst, it decomposes to give potassium chloride and oxygen.

In this reaction, a single substance splits up into two simpler substances on heating. Thus, it is a thermal decomposition reaction.

Experiment: Take about 2 gm of powdered lead nitrate (colourless) in a dry test tube. Heat the tube over a burner. We observe that brown fumes of nitrogen dioxide are found to evolve and a yellow residue of lead oxide is left behind in the tube. If we put a burning candle over the mouth of test tube, it catches fire and starts burning again. This shows that the oxygen gas is also evolved during this reaction. 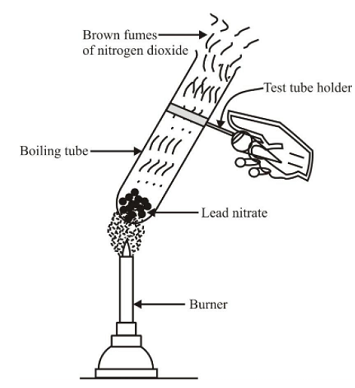 The reaction involved is :

Ex 4. Thermal Decomposition of limestone: When calcium carbonate (limestone) is heated, it decomposes to give calcium oxide and carbon dioxide.

Ex 5. Thermal decomposition of zinc carbonate: When zinc carbonate is heated, it decomposes to give zinc oxide and carbon dioxide gas.

❑   There is formation of bubbles of two different gases over the electrodes which displace the water in test tubes.

❑   Keep on passing current till the test tubes are completely filled with respective gases. Now switch off the battery.

On testing the gases by bringing a burning candle near mouth of tubes, it is found that the gas with double volume, burns with poping sound, so it is hydrogen gas. The other gas with lesser volume, makes the burning candle to glow more, so, it is oxygen gas.

Thus above experiment shows that on supplying electricity, water decomposes into hydrogen and oxygen according to the reaction :

In this reaction, on passing electric current, a single substance i.e. alumina decomposes to give two simpler substances, aluminium metal and oxygen gas, thus it is an example of electrolytic decomposition reaction.

Experiment: Take a pinch of silver chloride on a watch glass and keep it in sunlight for some time.

Decomposition of silver chloride in the presence of light


It is observed that white silver chloride turns gray due to formation of silver metal.

The decomposition reactions are used in the extraction of metals in the following ways :

(i)   Metals are extracted from their molten salts by electrolytic decomposition e.g. sodium from molten sodium chloride and aluminium from alumina (molten aluminium oxide).

(ii)   Thermal decomposition reactions form one of the steps in extraction of metals.


For example, Zinc carbonate (the naturally occurring ore of zinc) is first decomposed to give zinc oxide and then reduced to obtain zinc metal i.e.,

Decomposition Reactions in our body:

The digestion of food in the body is an example of decomposition reaction. When we eat foods like wheat, rice or potatoes, then the starch present in them decomposes to give simple sugars like glucose in the body and proteins decompose to form amino acids : 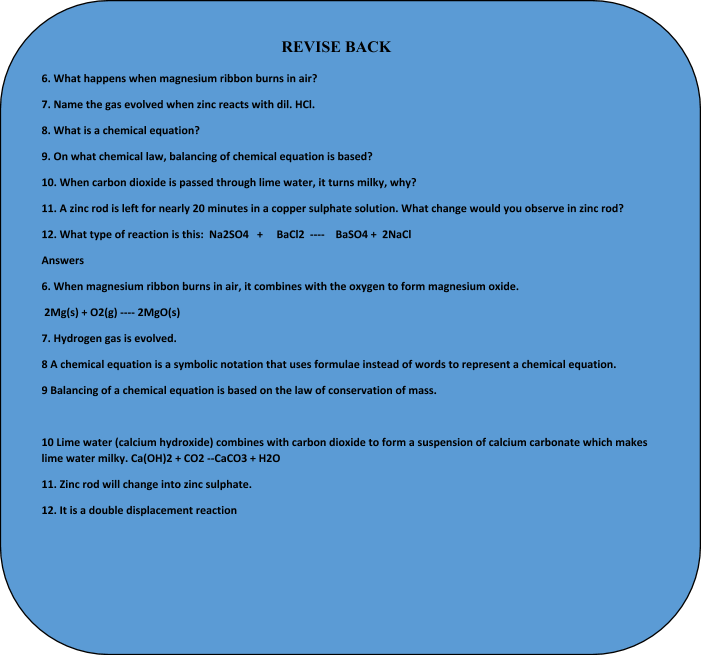