Ionic And Chemical Equilibrium of Class 11

If temperature, pressure and composition of a system does not change with time then the system is said to be in thermodynamic equilibrium. It is composed of three different equilibria

In reversible reactions, a stage is reached when the rate of transformation of reactants into products equals the rate of transformation of products into reactants. At this stage, the composition of reactants and products does not change with time. This does not mean that the reaction has ceased, as both reverse and forward reactions are still taking place but with equal pace. Such equilibria are called dynamic equilibria. 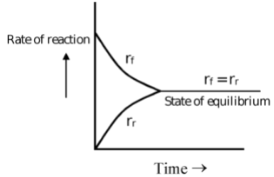 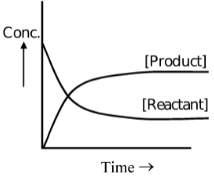 According to a law proposed by Guldberg and Waage "at constant temperature, the rate of reaction is directly proportional to active masses of the reactants raised to the power of proper stoichiometric coefficients".

Active mass of the reactant is directly proportional to its molarity. Active mass of any species is represented by writing the concentration of that species in square brackets.

For very dilute solutions, the value of γ is unity.