Force Acting On A Charge Moving A Magnetic Field

An electromagnet is a temporary strong magnet and is just as a solenoid with its winding on a soft iron core.

An electromagnet consists of a soft iron core AB placed inside a solenoid. The current in the solenoid can be adjusted with a rheostat Rh in the circuit having a battery and a key, K as shown in figure. An electromagnet acquires the magnetic properties only when an electric current is passed through the solenoid. Once the current is switched off, it almost loses its magnetic properties as the retentivity (the ability to retain magnetism) of soft iron is very low.

The strength of the electromagnet depends upon:

In order to provide a strong magnetic field in a small region, an electromagnet is made in the U-shape. Such a magnet is called a horse-shoe magnet.

A permanent magnet is made from steel. As steel has more retentivity than iron, it does not lose its magnetism easily.

A steel bar is placed inside a solenoid AB as shown in the figure and the current is switched on and off with help of key K. On removing and testing the bar, it is found to be magnetised. It is of no use to pass the current through the solenoid for a long time because the bar will not be magnetised beyond a certain limit. On the other hand, the solenoid may be damaged due to overheating.

Apart from different varieties of steel (carbon steel, chromium steel, cobalt and tungsten steel), some alloys like Alnico (aluminium, nickel and cobalt) and Nipermag (an alloy of iron, nickel, aluminum and titanium) are used to make very strong permanent magnets.

Permanent magnets are used in

Difference Between a Bar Magnet (for Permanent Magnet) and an Electromagnet:

(i) Magnet can be demagnetised by:

(A) Self-demagnetisation, if the magnet is stored without using magnetic keepers.

(B) Dropping it from a height or by rough handling.

(C) Heating or hammering the magnet.

(ii) Magnet can be demagnetised by placing it within a solenoid and passing high frequency AC through it.

USES OF MAGNETISM IN MEDICINE:

An electric current always produces a magnetic field. Even weak ion currents that travel along the nerve cells in our body produce magnetic fields.

When we touch something, our nerves carry an electric impulse to the muscles we need to use. The impulse produces a temporary magnetic field. These fields are very weak and are one billionth of the earth's magnetic field. Heart and brain are the two main organs in the human body where the magnetic field produced is significant. The magnetic field inside the body forms the base of obtaining the images of different body parts. This is done by using a technique called Magnetic Resonance Images (MRI). Analysis of these images helps in medical diagnosis. Magnetism has thus, got important uses in medicine.

(a) Force on a Current-Carrying Conductor in a Magnetic Field :

Take a small aluminium rod AB. Suspend it horizontally by means of two connecting wires from a stand. Now, place a strong horseshoe magnet in such a way that the rod is between the two poles with the field directed upwards. If a current is now passed in the rod from B to A, we will observe that the rod gets displaced. This displacement is caused by the force acting on the current-carrying rod. The magnet exerts a force on the rod directed towards the right, with the result the rod will get deflected to the right. If we reverse the current or interchange the poles of the magnet, the deflection of the rod will reverse, indicating thereby that the direction of the force acting on it gets reversed. This shows that there is a relationship among the directions of the current, the field and the motion of the conductor.

The direction of force is obtained by the Fleming's left hand rule.

Experimentally it is found that the magnitude of the force acting on a current carrying conductor kept in a magnetic field in direction perpendicular to it, depends on the following factors :

Where K is constant whose value depends on the choice of units. In S.I. units K = 1 and the unit of magnetic field is tesla (T). 1 tesla is equal to 1 newton ampere-1 metre-1 or 1 weber metre-2.

Force is directly proportional to sinΘ where A is the angle between current and the direction of magnetic field. I.e., F α sinθ

Combining all we have F = BIl sinθ

Force on a current - carrying conductor placed parallel or antiparallel to magnetic field is zero.

(ii) If θ = 90°, sin θ =sin 90° = 1, F= BIl is the maximum force. Force experienced by the conductor is maximum when placed perpendicular to magnetic field.

A moving charge in a magnetic field (direction of motion not parallel to the field direction) experiences a force called Lorentz force. Since current is due to flow of charge, therefore a conductor carrying current will experience a force.

The force acting on a current-carrying conductor placed in a magnetic field is: F=BIl

Suppose the particle carrying the charge Q travels a length l in time t. Then the velocity v of the charged particle will be equal to I/t . Writing v in place of I/t  in the above equation, we get:

Where B = Magnitude of magnetic field, Q = Charge on the moving particle and v = Velocity of the charged particle (in metre per second). In vector notation

FORCE ACTING ON A CHARGE MOVING A MAGNETIC FIELD

where I is the current flowing in the conductor,  is its length in the magnetic field.

Wind an insulated copper wire on a wooden cylinder so as to form a solenoid coil. Connect the two ends of the coil to the centre of galvanometer. A magnet is placed along the axis of the coil. 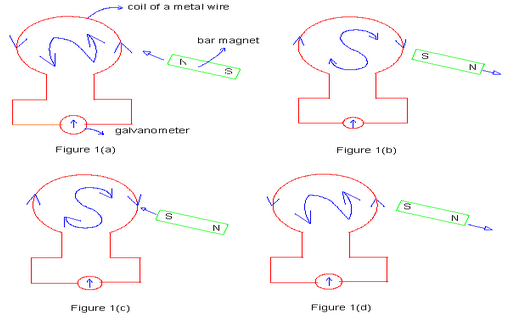 From this experiment Faraday concluded that:

(A) the rapid motion of the magnet or the coil.

(B) the use of a strong magnet.

(C) increasing the area and number of turns in the coil.

When the magnet and coil are relatively at rest, the total number of magnetic lines of force due to the magnet passing through the coil (i.e. the magnetic flux linked with the coil) remains constant, therefore no e.m.f. is induced in the coil and the galvanometer shows no deflection.

This law gives us the direction of current induced in a circuit. According to Lenz's law, the induced current will appear in such a direction that it opposes the change (in magnetic flux) responsible for its production.

The law refers to induced currents, which means that it applies only to closed circuits. If the circuit is open, we would find the direction of induced e.m.f. For example, in figure, when the magnet is moved towards the loop, a current is induced in the loop. The induced current produces its own magnetic field with magnetic dipole moment M⊔ oriented so as to oppose the motion of the magnet. Thus the induced current must be anticlockwise as shown in figure below.