Wear and tear of cells and their replacement in the body is a regular and everyday phenomenon. e.g. RBC, skin cells, the mucosal cells of gut. Many animals can restore their accidently lost or damaged body parts. Cuts and wounds are soon healed up by localized proliferation andmigration of cells. The restoration takes place primarily by initiating the morphogenetic processes i.e. multiplication and differentiation of cells. These post-embryonic events are collectively called as repair and regeneration. Power of regeneration varies in different animal groups. Higher forms can reconstitute only small part of the body while lower forms can restore the whole body from a small fragment, others cannot do so at all. Accordingly, it is of two types

Reparative regeneration : Localized cell movement for repair or healing of the lost part. Common in both invertebrates and vertebrates. e.g., formation of lost part of mammalian liver. 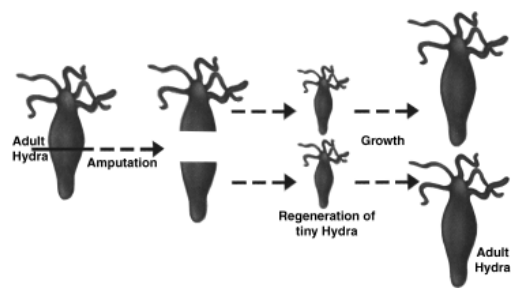 Restoration of major part or the complete body; occurs in animals of simple body organisation hence common in invertebrates.

It is similar to the process of embryonic development.

In sponges, archaeocytes perform this function, but other cells can also do so by undergoing dedifferentiation.

Even differentiated cells retain their individuality and totipotency hence it dissociated, cells reassociate, and reorganize to form new individual by taking up their respective positions and functions.

This is an intermediate kind of regeneration without undergoing dedifferentiation. In case of the loss of one kidney other one increases in size to compensate the function of lost one to some extent (compensatory hypertrophy).

Morphollaxis (morphallactic regeneration): By this process whole body is formed from small fragment; involves reorientation and reorganisation of the existing cells; since no new cells are formed concurrently, the regenerated individual is smaller in size which later grows to normal size (e.g. Hydra).

Epimorphosis (or epimorphic regeneration) : Occurs by the proliferation of new cells or tissues from the surface of wounds or cut parts. e.g., regeneration of limb, tail, etc., in salamander and lizard. It

involves dedifferentiation to form undifferentiated mass of tissue. It begins with the spreading of epidermis from the edges of the wound, it takes about two days to cover the wound. After next few days a conical bulge appears at this site as a mass of accumulated cells below epidermis which begins to proliferate actively. This is called as blastema or bud (callus in plant) which then redifferentiate to form the lost part controlled by neuronal and hormonal factors. Lower the grade of evolution greater is the power of regeneration. When the organisation becomes more complex the power of restorative regeneration is lost and only the power of reparative regeneration remains.

Both in limb and tail the progenator of mesenchyme is the blastema formed by dedifferentiation, their division is controlled by nerve and wound epidermis.

Neurons release some trophic factors which may either act as stimulatory or as inhibitory factors in limb regeneration. These are:

The cutting or breaking off its own body parts to save itself from the danger e.g., Lizards break off its tail, and the crabs do so with its leg, the sea cucumber (holothurians) throws off its entire visceral organ (evisceration).

It is the period from birth to death, longer in women than man.

Life expectancy is the number of years one individual is expected to live, this is based upon the average life span. It is defined as the age at which half of the population still survives. Maximum life span is the characteristic of species while life expectancy is the characteristic of a population. In wild animals the maximum life span is difficult to estimate since they live in natural condition, face very high death rates due to diseases, infant mortality, rough weather, predators, competition etc. Hence reliable information is based upon reports from zoo. Following table depicts this : 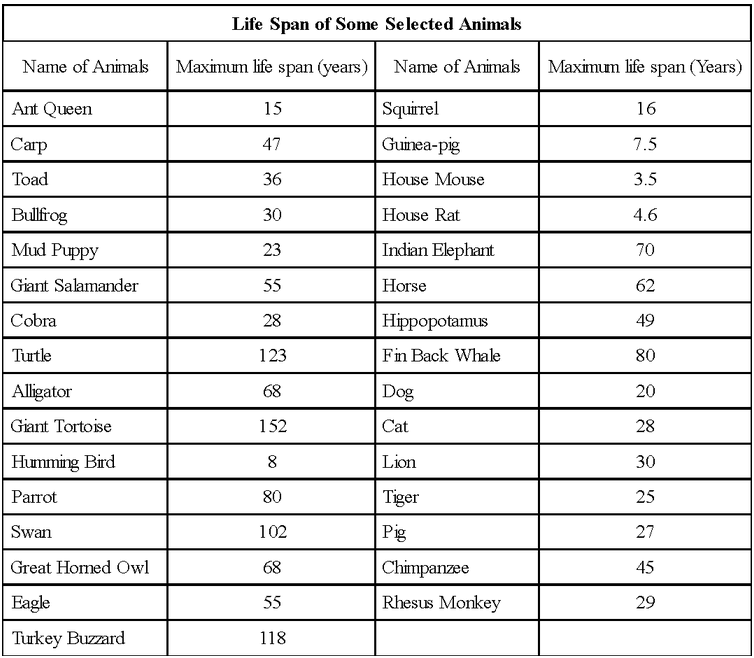 Maximum life span is about 121 years based upon a Japanese, Shirechiyo Izumi, who reached 120 years. Due to low rate of mortality the average life span and life expectancy has increased markedly. It is 56 years in India and 78 years in USA. Increase of life span is due to improved sanitation, medical facility, life style, discovery of antibiotics :