Introduction of euclid geometry of Class 9

(i) Collinear points :Three or more points are said to be collinear if there is a line which contains all of them.

(ii) Concurrent Lines : Three or more lines are said to be concurrent if there is a point which lies on all of them. 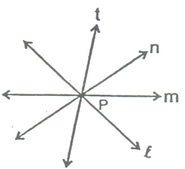 (iv) Parallel lines : Two lines I and m in a plane are said to be parallel lines if they do not have a common point.

(v) Line Segment :Given two points A and B on a line I, the connected part (segment) of the line with end points at A and B, is called the line segment AB.

(ix) Ray :Directed line segment is called a ray. If AB is a ray then it is denoted by

. Point A is called initial point of ray.

(x) Opposite rays :Two rays AB and AC are said to be opposite rays if they are collinear and point A is the only common point of the two rays.

There are several equivalent versions of the fifth postulate of Euclid. One such version is stated as ‘Playfair’sAxiom’ which is given below:

For every line λ and for every point P not lying on , there exists a unique line m passing through P and parallel to

Let us observe it in figure.

Another version of the above axiom is as stated below:

In figure, there are infinitely many straight lines through P but there is exactly one line m which is parallel to . Thus, two intersecting lines cannot be parallel to the same line.

A STATEMENT AS A THEOREM:

The properties confirmed through logical reasoning based on some axioms, postulates and previously proved results are called theorems or propositions.

Two distinct lines cannot have more than one point in common.

A CONSISTENT COLLECTION OF AXIOMS:

A collection of axioms is consistent, if it is impossible to derive from these axioms a result that contradicts any axiom or postulate or previously proved property.

All the attempts to prove Euclid’s fifth postulate using the first 4 postulates failed. But they led to the discovery of several other geometries, called non-Euclidean geometries.

Solution: According to the given statement, the figure will be as shown alongside in which the point C lies between two points A and B such that AC = BC.

2. Give a definition for each of the following terms. Are there other terms that need to be defined first ? What are they, and how might you define them ?

(iii) Line segment :It is a terminated line.

(iv) Radius :The length of the line-segment joining the centre of a circle to any point on its circumference is called its radius.

3. How would you rewrite Euclid’ fifth postulate so that it would be easier to understand?

Solution: If a straight line

is two right angles, then by Euclid’s fifth postulate the line will not meet on this side of

. Next, we know that the sum of the interior angles on the other side of line

also be two right angles. Therefore they will not meet on the other side. So, the lines m and n never meet and are, therefore parallel.

, m, n are lines in the same plane such that

, m, n in the same plane such that

and n are intersecting lines. 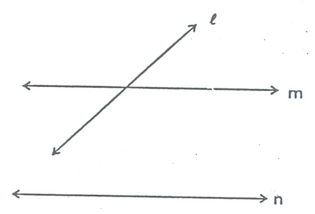 and n be non intersecting lines. Then.

and m are non-intersecting lines.

This is a contradiction to the hypothesis that

and m are intersecting lines.

So our supposition is wrong.

If lines AB, AC, AD and AE are parallel to a line

Given: Lines AB, AC, AD and AE are parallel to a line

Proof: Since AB, AC, AD and AE are all parallel to a line

Therefore point A is outside

and lines AB, AC, AD, AE are drawn through A and each line is parallel to

But by parallel lines axiom, one and only one line can be drawn through the point A outside it and parallel to