Transport In Plants of Class 11

Osmosis was discovered by Nollet.

Keeping in view that membrane is semipermeable, it allows only solvent molecules, so we can say that solvent moves from its higher conc. to lower conc.

It is used in removing salts from saline water as well as extra purification of water.

It is the pressure in atmosphere, which is required in opposite direction, so as to stop entry of water (solvent) molecules, when a semipermeable membrane separates concentrated solution from weaker solution.

If the plasmolysed cell (flaccid cell) is placed in hypotonic solution water enters into the cell. Entry of water under influence of dilute solution is known as endosmosis. It makes the cell again turgid and this is known as deplasmolysis. 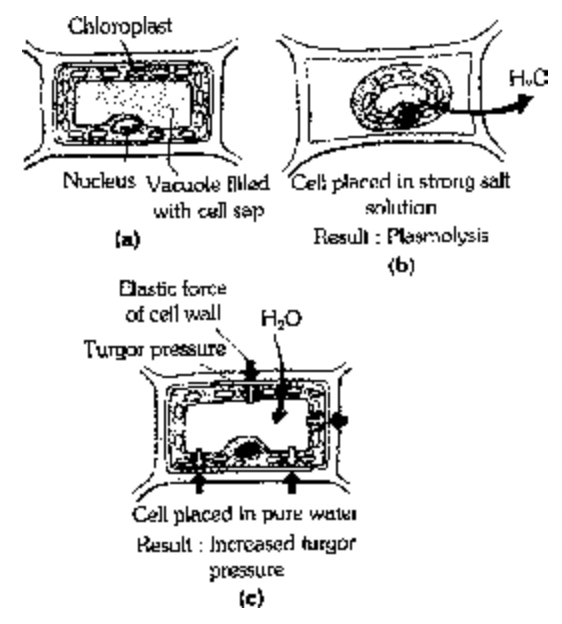 Pressure exerted by the protoplast against the cell wall is known as turgor pressure. When a living plant cell is placed in water, it swells up due to the absorption of water by osmosis. As a result of this entry of water into the cell sap, a pressure developed in the protoplast which is exerted against the cell wall. This actual pressure is T.P. The cell wall being rigid and elastic exerts, an opposite pressure equal in magnitude to the turgor pressure. This pressure is called wall pressure (W.P.)

This term was given by Meyer.

e.g., if sugar solution is made in water, then D.P. of solution is lower than water (solvent).

The amount by which D.P. of solution is lower than that of its pure solvent, is called Diffusion Pressure Deficit (D.P.D.).

In case of D.P.D., the solution will try to wipe off this difference in D.P. by sucking more water (solvent) molecules and hence D.P.D. is the measure or index of sucking power and hence it is also called suction pressure (S.P.)

(Term suction pressure was given by Renner).

Therefore cell absorbs or sucks water with a force equal to O.P.

i.e., cell has no further capacity to absorb any water

Concept of water potential was given by Slatyer and Taylor.

It is the difference in the free energy (chemical potential) of water molecules in the solution and that of pure water at the same temperature and pressure.

It is indicated by the Greek letter Psi, the symbol for which is

of pure water is zero.

of a solution is always negative.

) is nil as in plasmolysed cell.