THE WATER-CYCLE OR HYDROLOGICAL CYCLE

Water is the most abundant (60-90%) component of protoplasm. It acts as a habital for hydrophytes and many aquatic animals, a good ionizer, good solvent, temperature, buffer and perform transportation of materials. It also helps in digestion of organic compounds and in photosynthesis of plants.

Water evaporates from the hydrosphere (oceans, seas, rivers, lakes, etc.) with sun’s heat and form clouds. Rain may fall directly into the oceans or clouds blowing over the land also precipitate (rain, snow, hail, etc). Some water is soaked into the ground and some flows into rivers from where it gets into the seas. The ground water comes to the surface by springs and pumps. This water finally evaporates into the atmosphere and form clouds. This completes the global water cycle. 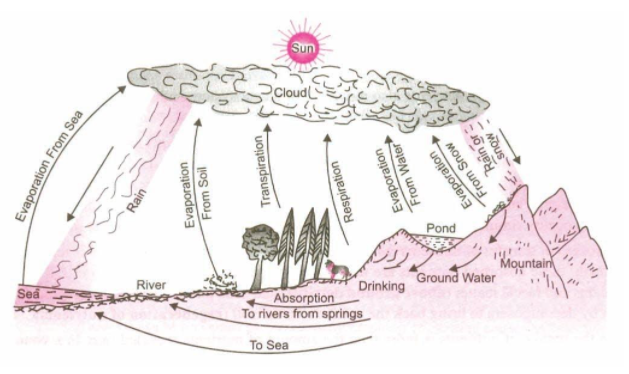 Water is used by terrestrial plants and animals for various life processes. Transpiration of water plays a role in determining the microclimate around them. Water being a universal solvent dissolves a large number of substances. These dissolved minerals are carried to rivers and then to the seas where these are used by the marine animals.

Nitrogen is an essential component of amino acids, proteins, enzymes and nucleic acids of the protoplasm. Reservoir pool of nitrogen is atmosphere which contains about 78.08% of nitrogen in gaseous state. But it cannot be used directly and is changed into nitrites and nitrates and then utilized.

Steps of nitrogen cycle are:

Nitrogen fixation: it involves the conversion of free diatomic nitrogen (N2) into nitrites and nitrates. It occurs in three ways:

Ammonification: it involves the decomposition of proteins of dead plants and animals to ammonia in the presence of ammonifying bacteria like Bacillus ramosus.

Nitrification: it involves the oxidation of ammonia to nitrites (NO2) and nitrates (NO3) in the presence of nitrifying bacteria like Nitrosomonas (Ammonia to nitrite), Nitrobacter (Nitrite to nitrate), etc. plants absorb the nitrites and nitrates from the soil through their roots and convert them into organic compounds(e.g. proteins) of protoplasm by the process called nitrogen assimilation.

Denitrification: it involves reduction of ammonium compounds, nitrites and nitrates to molecular nitrogen in the presence of denitrifying bacteria like Thiobacillusdenitrificans. 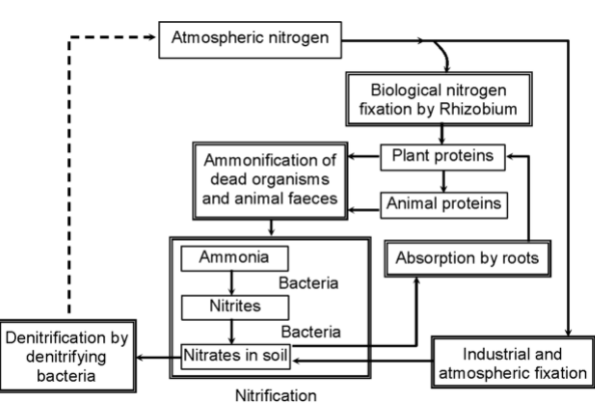 Carbon is the basic constituent of all living beings. Its organic compounds play a major role in our life as carbohydrates, fats, proteins and nucleic acids. Food, fibers (cotton, jute), medicines, fertilizers and fuels, all contain compounds of carbon. The endoskeletons and exoskeletons of various animals are also formed from carbonate salts.

The main features of carbon cycle are as follows: 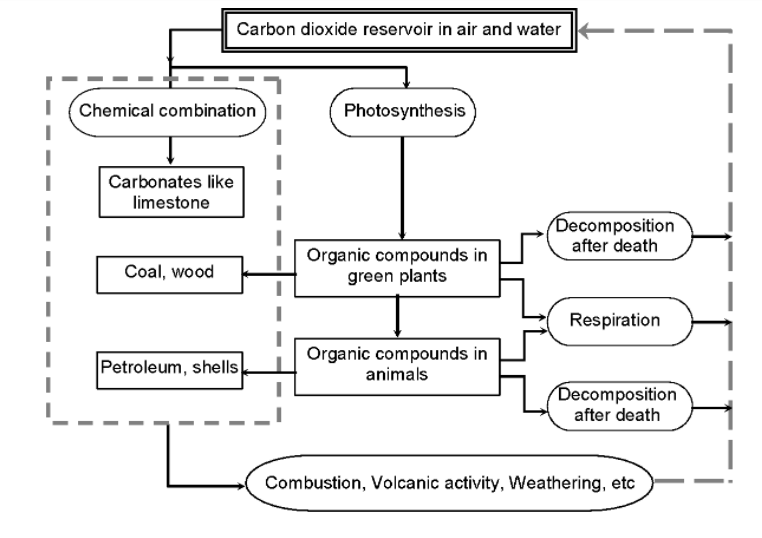 Oxygen is a very abundant element in our Earth. It is found in the elemental form in the atmosphere (21%). In combined form, it is found in the Earth’s crust as oxides of most metals and silicon, as carbonates, sulphates, nitrates and other minerals. It is also found in the air in the form of carbon dioxide.

The following are the steps of oxygen cycle: 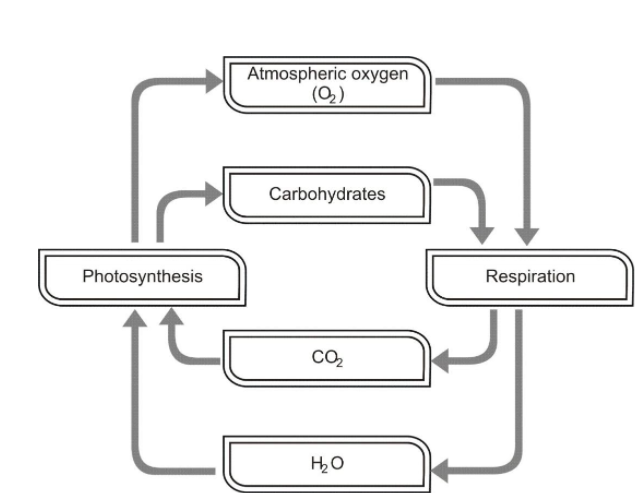