Earthworm: An earthworm does not have bones or legs. The earthworm’s body has two types of muscles: circular muscles & longitudinal muscles.

Each segment of the earthworm’s body has tiny bristles (hair-like structures) on its underside. These bristles can be moved into the ground to grip the ground or withdrawn to release the ground. An earthworm moves by “lengthening’ and ‘shortening’ its body alternately by using the circular muscles and longitudinal muscles, respectively. 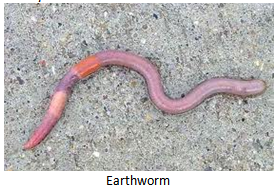 Illustration 7: How does an earthworm fix the parts of its body to the ground?

Solution: The earthworm has a large number of tiny bristles; these hairs-like structures are called setae.

The body of the snail is covered by a hard shell. The shell has an opening with a lid. The shell is a single unit and does not help in moving from place to place. It has to be dragged along. This shell cannot help in movement but it protects the soft body of the animal. The snail projects its head out of the opening of the shell. It is followed by the foot which is a thick muscular structure. The alternate contraction and relaxation of foot muscles help the snail to glide over the surface.

Cockroaches walk and climb as well as fly in the air. They have three pairs of legs. These help in walking. The body is covered with a hard outer skeleton. This outer skeleton is made of different units together and that permits movement.

There are two pairs of wings attached to the back. The cockroaches have distinct muscles - those near the legs help in walking. The back muscles move the wings when the cockroach flies. 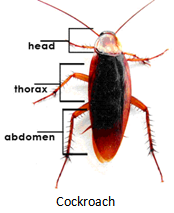 Birds fly in the air and walk on the ground. Some birds like ducks and swans also swim in the water. The birds can fly because their bodies (stream-lined shape) are well suited for flying. Their bones are hollow and light. The bones of the hindlimbs are typical for walking and perching. The bony parts of the forelimbs are modified as wings. The shoulder bones are strong. The breast bones are modified to hold muscles of flight which is used to move the wings up and down.

The lungs have air sacs which not only make the body light and buoyant but also increase the oxygen supply when flying. All these sacs help in double breathing as the air crosses the lungs twice i.e. during breathing in and breathing out. The wings and tails in birds are reinforced with various types of feathers that provide an extended surface. This extended surface allows the wings to develop enough lift to completely overcome the downward pull of gravity.

The shape of the wings is such that air passes with greater speed from its upper surface than the lower surface. This created a high air pressure below the wings which causes lifting of the wings and as a result of this, these birds soar high in the sky. 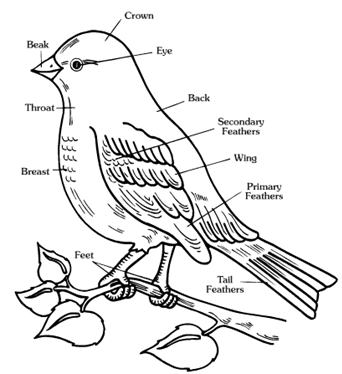 Illustration 8: Give three features which help the bird to fly.

The body shape of the fish is, streamlined. The shape is such that water can flow around it easily and allow

the fish to move in water The fish has got various types of fins on its body which help in swimming. The skeleton of the fish is covered with strong muscles. During swimming, muscles make the front part of the body curve to one side and the tail part swings towards the opposite side. The fish forms a curve. Then quickly, the body and tail curve to the other side. This makes a jerk which pushes the body forward. This is helped by the fins and the tail. Thus, we find that fish swims by moving their body and tail from side to side.

Fish also have other fins on their body which mainly help to keep the balance of the body and to keep direction, while swimming. Did you ever notice that underwater divers wear fin-like flippers on their feet, to help them move easily in water? 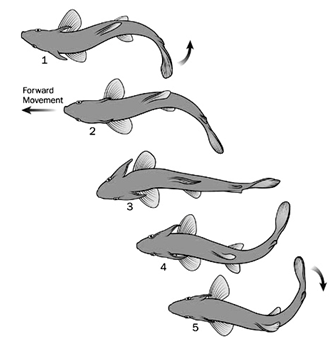 Illustration 8: What is the body shape of the fish?

The snake's long and slender body has more ribs and vertebrae than do other backboned animals. The snake is, therefore; very flexible which is more advantageous during locomotion. Have you seen a snake slither? Doesn’t it move straight?

Snakes have a long backbone. They have many thin muscles. They are connected even though they are far from one another. They also interconnect the backbone, rib, and skin. The snake's body curves into many loops. Each loop of the snake gives it a forward push by pressing against the ground. Since its long body makes many loops and each loop gives it this push, the snake moves forward very fast and not in a straight line. 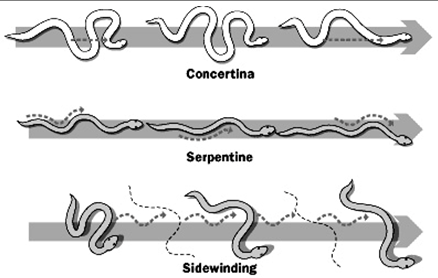