Electric charge, basic property of matter carried by some elementary particles. Electric charge, which can be positive or negative, occurs in discrete natural units and is neither created nor destroyed.

When we rub our shoes across a carpet and reach for a metal doorknob, we can be zapped by  a spark of electricity. The answers to this lies in the branch of Physics called Electrostatics. The word electricity comes from the Greek word electron, which means "amber." Amber is petrified tree resin, and it was well known to the ancients that if we rub an amber rod with a piece of cloth, the amber attracts small pieces of dry leaves or paper. A piece of hard rubber, a glass rod or a plastic comb rubbed with cloth also display this "amber effect" or static electricity or frictional electricity as we call it today.

Experiments show that there are exactly two kinds of electric charges :

These also show that unlike charges attract each other while like charges repel each other. The S.I. unit of electric charge is coulomb. It is denoted by symbol C.

Electrons are the smallest and lightest of the particles in an atom. Electrons are in constant motion as they circle around the nucleus of that atom. Electrons are said to have a negative charge, which means that they seem to be surrounded by a kind of invisible force field. This is called an electrostatic field.

Protons are much larger and heavier than electrons. Protons have a positive electrical charge. This positively charged electrostatic field is exactly the same strength as the electrostatic field in an electron, but it is opposite in polarity. Notice the negative electron (pictured at the top left) and the positive proton (pictured at the right) have the same number of force field linesin each of the diagrams. In other words, the proton is exactly as positive as the electron is negative. 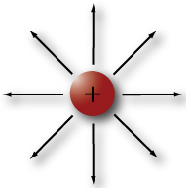 Since the electron is much smaller and lighter than a proton, when they are attracted to each other due to their unlike charges, the electron usually does most of the moving. This is because the protons have more mass and are harder to get moving. Although electrons are very small, their negative electrical charges are still quite strong. Remember, the negative charge of an electron is the same as the positive electrical charge of the much larger in size proton. This way the atom stays electrically balanced.