Chemically of two types: (1) Proteinoid and (ii) Steroid hormone with different types of influence upon the cellular processes.

Proteinoid hormones are amino acid, polypeptides, proteins and glycoproteins. They do not enter the cell but accomplish their effects at the membrane level in following ways:

It alters the permeability of membrane thereby allowing various substances to cross through.

It stimulates the enzyme cascade of the cell membrane, most common is adenyl cyclase enzyme which mediates the formation of cyclic-AMP (c-AMP) from ATP.

Steroid hormones are lipids or derivatives of fatty acids which can directly enter the target cell and affect the gene activity inducing the synthesis of specific protein (or enzymes) or suppressing the activity of other genes. This involves the synthesis of enzymes or stopping it.

The release of any hormone and its amount depend upon its own level in the blood. It’s higher level inhibits its secretion while its low level enhances its secretion.

This is also popularly known as pull and push or plus minus control.

Catecholamines, peptides and protein hormones are not lipid soluble hence cannot enter the target cells. They interact with surface receptor, usually a glycoprotein, which initiates chain of events that varies for different hormones, finally coming to intracellular receptors. Example of insulin action is well explained as follows:

Receptors for insulin is a heterotetrameric protein with 4 units—two -subunits protruding outside on the cell surface which binds with insulin and two -subunits that protrude in the cytoplasm. In most cells such receptors are about 100/cell but in liver cell more than a lakh are present.

(i) Binding to the receptor Insulin binds to -subunit, causes conformational change in -subunit of receptor which is actually an enzyme tyrosine kinase—which add phosphate group to tyrosine residue of cytoplasmic receptor.

(ii) Cytoplasmic (second) messengers G-protein along the inner (cytoplasmic) face of membrane which acts as transducer activates the enzyme phosphodiesterase which changes phosphatidylinositol 4, 5-

biphosphate (PIP2) into a pair of mediators: (I) Inositoltriphosphate (IP3) and diacylglycerol (DG or DAG).

DG remains along the membrane and activates another enzyme, protein kinase C (PKC) which then activates many other enzymes, e.g.,

pyruvate dehydrogenase. The lipid portion of DAG is arachidonic acid which is precursor of prostaglandins. 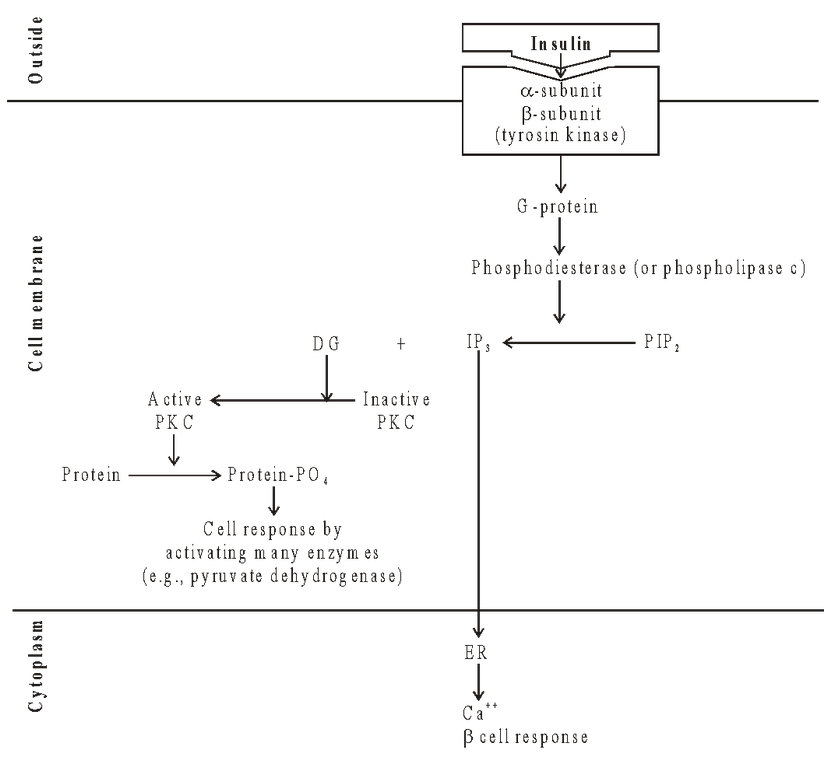 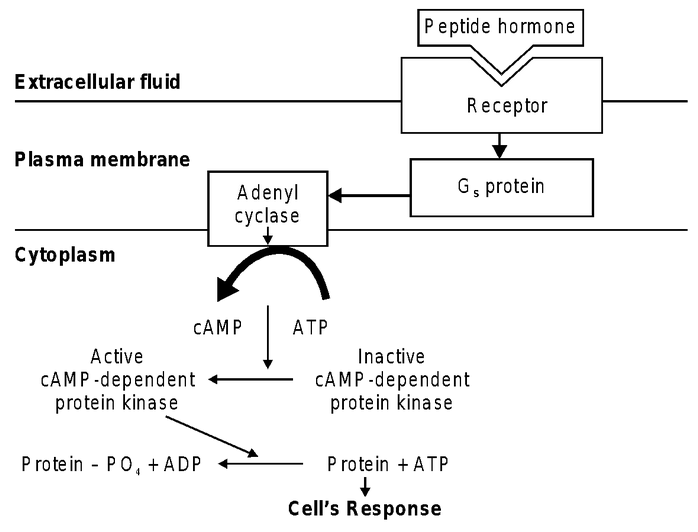 (iii) Amplification of Signal These above said mediators amplify the signal, e.g., 1 -subunit activates many DG molecules and each protein kinase C activates many other enzyme molecules. DG and IP2 act as

Variety of hormones also use other second messenger e.g., cAMP. The enzyme adenyl cyclase (in membrane) converts ATP into cAMP. A

single adenyl cyclase can produce about 100 molecules of cAMP.

cyclase. This complex cascade then produces large amount of cAMP.

cAMP activates the enzyme protein kinase A each molecule of which in turn activates >100 molecules of enzyme phosphorylase kinase.

As a result a single molecule of adrenaline can cause the release of 100 million of glucose molecule within 1 or 2 minutes.

The steroid and thyroid hormones enter the cell directly and bind to the intracellular receptor proteins in the cytoplasm, this complex enters

nucleus and bind to the specific regulatory sites on chromosome. This alters the pattern of gene expression — initiating its transcription,

formation of specific mRNA and then protein (enzyme).

cGMP for acetylcholine slows the heart rate. This is how sympathetic and parasympathetic nervous system achieve antagonistic effect.

Sometimes two or more hormones complement each other’s action and both are needed for full expression of their effects, e.g., production,

secretion and ejection of milk from mammary glands is effected by estrogen, progesterone, prolactin and oxytocin. Estrogen causes growth of

causes synthesis of milk and oxytocin causes release or ejection of milk.

Endocrine glands : Endocrine glands vary in embryonic origin and are isolated from one another. Thus they do not form an organ-system comparable to the other organ system of body. Still they are together

referred to as an endocrine system because they interact. A hormone from one gland may stimulate or inhibit another gland. Hormones from hypothalamus regulate the secretion of hormones from pituitary gland

targets of hypothalamic hormones. The hormones from secondary target glands effect final target organs. Endocrine glands vary in structure. Some are unicellular such as cells in the lining of alimentary canal,

neurosecretory cells of hypothalamus. Some are compound organs, consisting of two parts of different origin combined into one eg adrenal, pituitary.