Mechanical part is the process of filtration occuring in 3 stages in different parts of nephron.

Substance of blood from glomerular capillaries pass into nephron through Bowman’s capsule due to filtration pressure (FP).  FP develops as resultant pressure of Glomerular pressure

(GP), Osmotic colloidal pressure (OCP) of blood and Intracapsular pressure (CP) which are respectively 70 mmHg, 30 mmHg and 15 mmHg. The OCP and CP act as negative or counter pressures.

GP develops due to difference in diameter of a afferent (wider) and efferent (narrower) arteriole; higher the difference greater the GP. 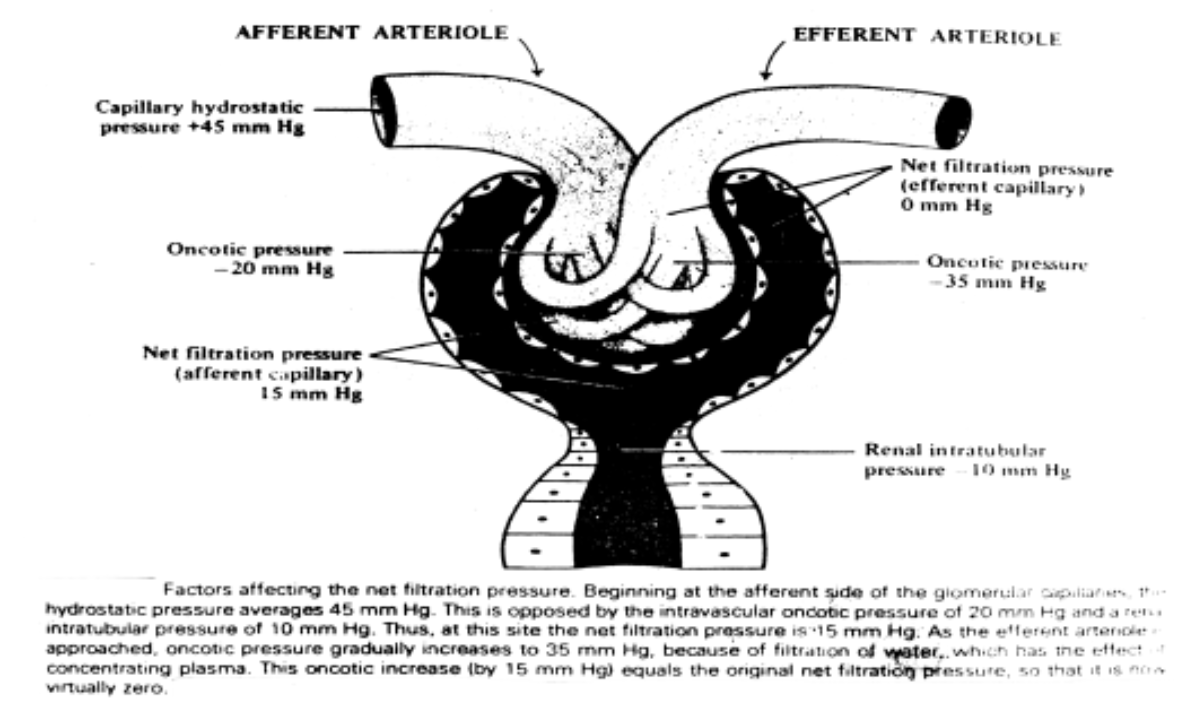 Except the blood cells and large molecules like proteins and others, the entire content of plasma get filtered.  These are water, salt, sugar, amino acids, urea, uric acid, creatinine, hippuric acid etc.

The volume of fluid filtered into Bowmann’s capsule per minute is known as glomerular filtration rate (GFR), which is  –120 ml in man, out of this only 1 ml (0.8%) forms urine.

180 litre of ultrafiltrate constitutes about 1/5th of the total renal plasma flow (= 900 litres) entering the kidney per day (700 ml/minute). 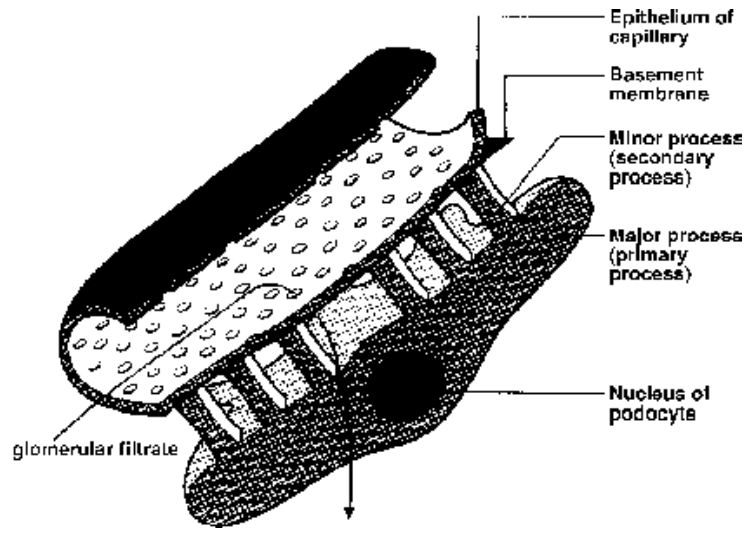 Filtration fraction is the ratio of glomerular filtrate and renal plasma flow through kidney.

Due to fall in B.P. the G.P. comes to 50 mmHg hence no filtration occurs, this is called renal suppression. 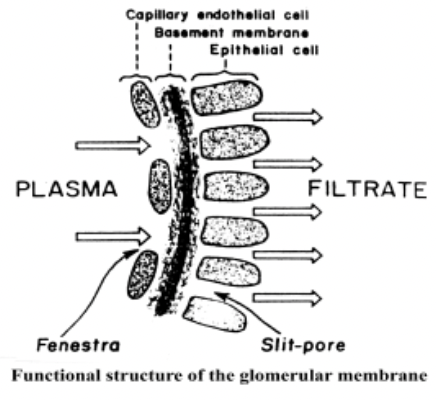 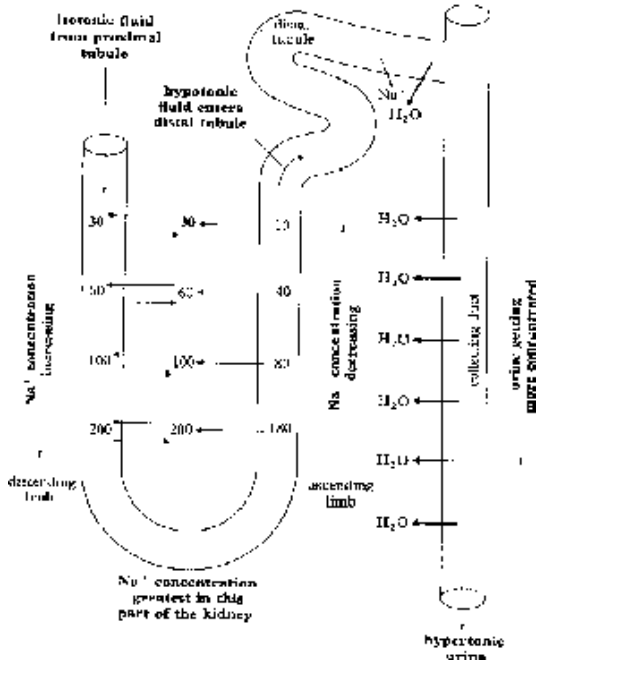 This involves both passive and active process of transport.  In different parts of the tubule it occurs differently.

— The cells of this part have microvilli, absorb substances like:

Fig. Function of loop of Henle in reabsorption of water

— Descending limb is permeable to water and about 5% of it is reabsorbed here by osmosis; impermeable to Na+ and other solutes.

— Ascending limb is impermeable to water but permeable to solutes, hence, 25% of K+ and some Cl– and also Na+ are reabsorbed here.

Fig. Structure of normal physiology of the nephron

— About 80% of water is reabsorbed by obligaroty process in PCT and Loop of Henle. 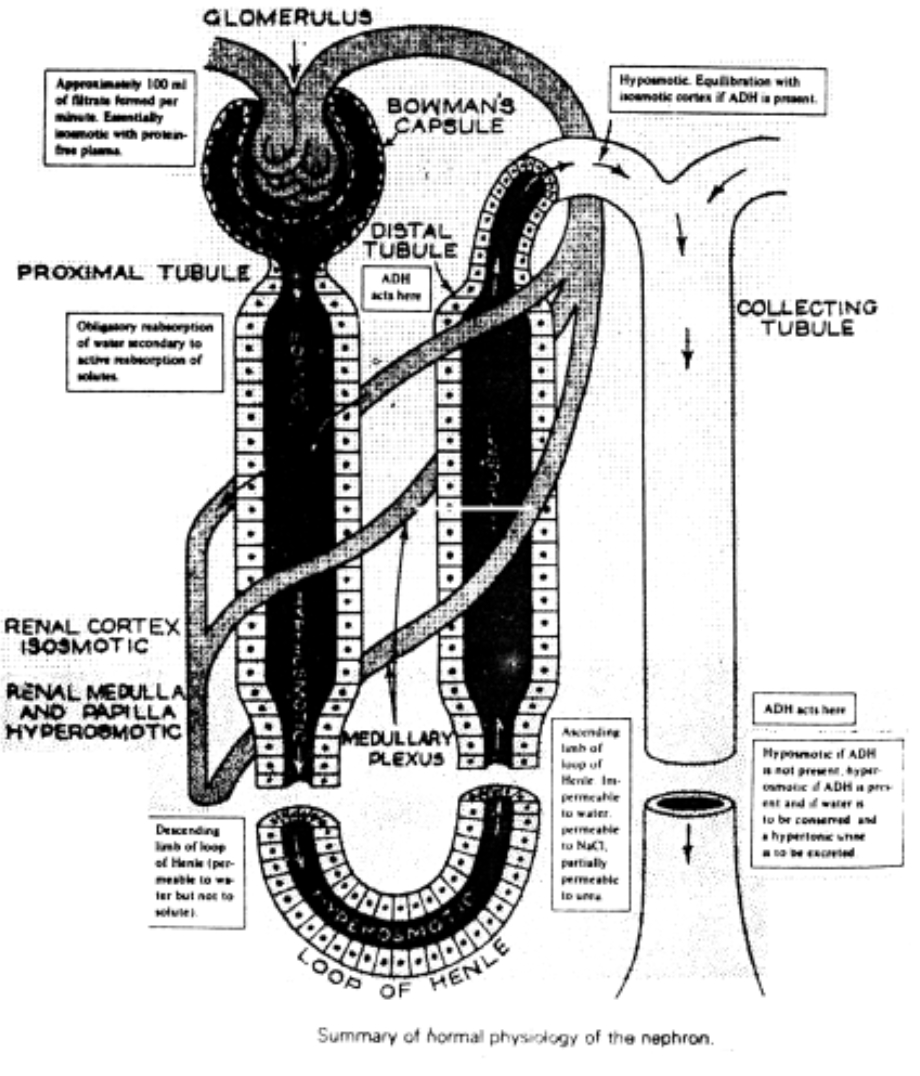 — It operates in loop of Henle as in the two parallel limbs, fluid flows in opposite direction and in contrast concentration.  The ions coming out of the ascending limb make peritubular fluid hypertonic which

draws more water from the descending limb. This is why longer loop of Henle (as found in desert mammals) is suitable to conserve more water.

— About 13% of water is reabsorbed (facultative process) here passively to maintain the osmolarity.

It is also influenced by ADH to retain more water if there is fall in water level. This is called as facultative water reabsorption. 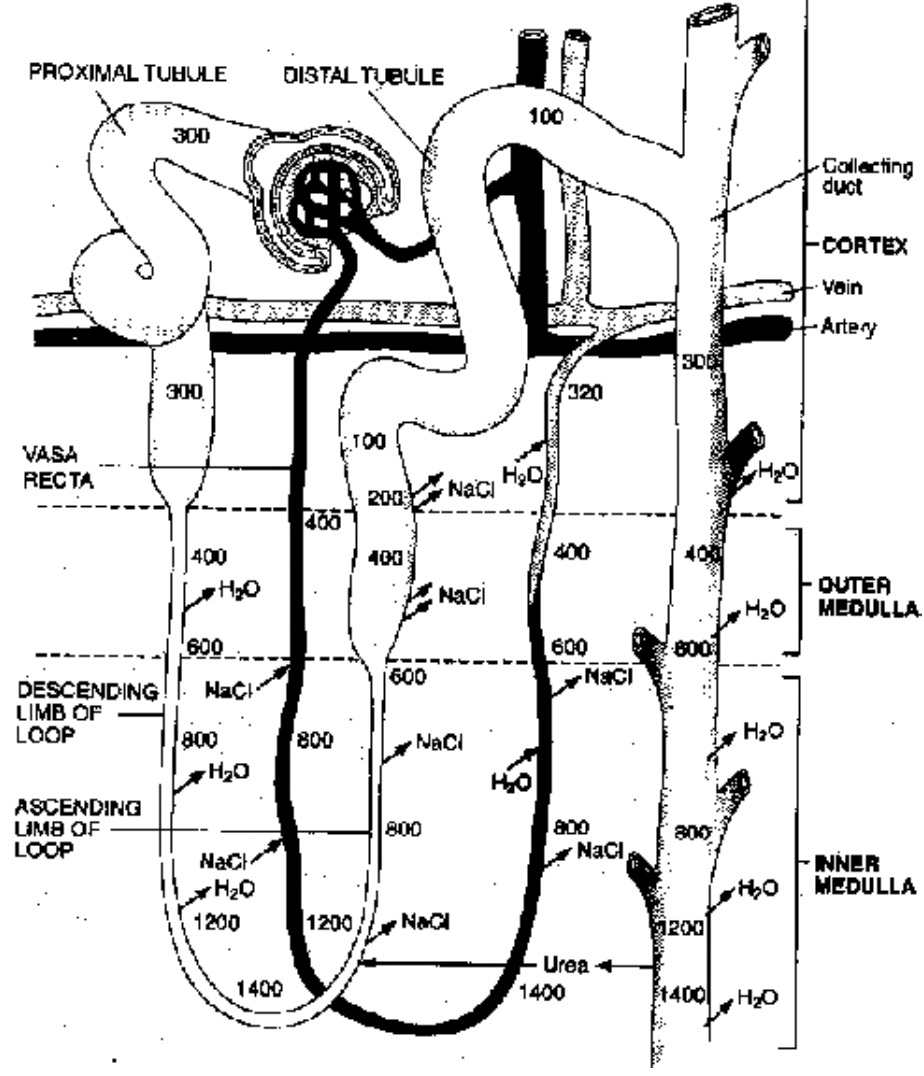 Fig. Urine concentration in a jugxtaglomerular nephron by countercurrent mechanism

Many substances, which are not filtered in the Bowman’s capsule are also found in the urine e.g. vitamins, uric acid, benzoic acid, para amino hippuric acid, drugs, penicillin and dyes like inulin, phenol red etc.

H+, K+, PO4– and Ca++ are also secreted by nephron as per requirement of the body like acid-base balance.

Marine fishes and desert amphibians have no glomerulus in their nephrons, hence urine formation takes place mainly by secretion of solutes into the tubular lumen.

Colour is pale yellowish due to urochrome pigment; odor is aromatic, the pungent smell of urine after sometimes is due to the bacterial degradation of urea into NH3.

Essential substances are withheld in the body to its maximum level and are not allowed to pass out with urine, these are glucose, amino acids, keto acids, some salts and Vitamin C.

Is the maximum concentration upto which substances are totally reabsorbed in the blood.  Beyond this level it is no longer reabsorbed and consequently it starts coming out in urine.

Glucose is a high threshold substance, as only after 180 mg per 100 ml of blood, it can appear in urine (glycosurea)

It is the act of passing urine, its urge occurs when 300-400 ml of urine accumulates in the urinary bladder.  But, it can be held voluntarily uptill 800 ml after which it becomes painful and irresistible.

The stretch receptor in urinary bladder sends a reflex to CNS and stimulate the opening of urethral sphincter and contraction in the wall of urinary bladder.

Voiding of urine can also be voluntary (cerebral control) or due to learning reflex.

Process of maintaining water and salt content of the body fluid.

Animals that maintain an internal osmolarity different from the surrounding medium in which they inhabit.

When quantity of water, increases in body fluids, they become dilute and their osmolalaty falls, the kidneys excrete diluted urine.

Animals that do not actively control the osmotic condition of their body fluids.

They show an excellent ability to tolerate a wide range of cellular osmotic environments e.g., all marine invertebrates and myxine.

By reducing or increasing the urine volume.

When water level is high in the body hypotonic urine is excreted.  But, in case of low water level the volume of urine is reduced (hypertonic)

Terrestrial and marine vertebrates lose water otherwise from their body, hence excrete hypertonic urine, so are the mammals and birds.

Vertebrate kidney is extremely flexible and the amount of water loss is regulated at various levels:

As specially of mammal, it is mainly responsible for concentrating the urine, hence, longer the loop of Henle higher the ability to excrete hypertonic urine.

The counter-current system operating at vasa recta and the two limbs of loop of Henle plays important role.

There are two other control systems :