Mineral Nutrition In Plants of Class 11

Nitrogen is one of the essential and important mineral elements for plants. It is found in such essential compounds, such as, proteins, nucleic acids, chlorophyll, alkaloids, growth regulators and many vitamins.

This element alone constitutes about 5-30% of total dry weight of the plant.

Most of the free nitrogen is found in atmosphere, yet it is energetically difficult for living organisms to obtain it directly for their use. Therefore, the molecular or elemental nitrogen has to be fixed i.e., combined with other elements such as C, H, O, etc. to form compounds.

The process of conversion of free nitrogen into nitrogenous compounds to make it available for plant absorption is called nitrogen fixation.

Out of these four compounds nitrates and ammonium ions are the most effective ones.

The process of nitrogen fixation is carried out by various microorganisms:

Free living bacteria which fix nitrogen may be autotrophic or heterotrophic according to the source of energy they require.

Symbiotic bacteria like Rhizobium, present in root nodules of legumes are capable of nitrogen fixation.

Some symbiotic microorganisms, such as Frankia (a fungus) found in root nodules of Alnus, Casuarina etc., can also fix nitrogen.

Nitrogen fixation occurs near the centre of the nodule. The legume provides carbohydrates to the bacteria. The electrons obtained by oxidation of carbohydrates are used by the bacteria to reduce nitrogen to ammonium ions.

These NH4+ ions are then converted into other nitrogenous compounds, part of which are absorbed by the surrounding plant cells and translocated to other regions. 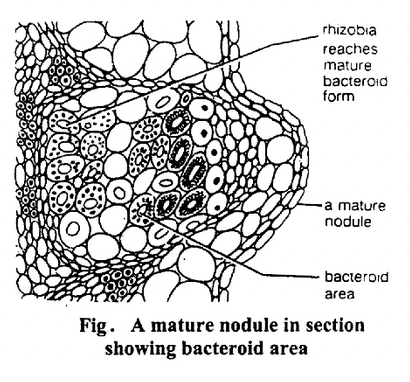 Healthy legume nodules are usually pink or reddish in colour due to the presence of a copper containing pigment called leghaemoglobin (LHb).

This pigment is closely related to haemoglobin, the red pigment of the human blood.

The pathway of symbiotic N2 fixation is exactly the same as in asymbiotic fixation.

Wipf and Copper (1938) observed that the nodule cells contain double the number of chromosomes (tetraploid), as compared to the normal somatic cells of the plant.

According to them, if there are no cells with double the normal chromosome number in the bacterium, no nodule will be formed.

Thimann (1939), Jenner and Anderson (1964) have suggested that IAA works as a stimulant during the nodule formation.

Recently J.J. Child of Canada and A.H. Gibson (1975) of Australia have found that N2-fixation in Rhizobium showed that bacterium possesses nitrogen fixing genes (nif genes) whereas the legumes provide substances like arabinose and xylose which cause the maximum expression of nif genes, concerned in the synthesis of enzyme nitrogenase (which play a key role in N2-fixation).

Mo and Co are also necessary micronutrients required for nitrogen fixation. Cobalt is necessary because it is an essential part of vitamin B12, a compound possibly involved in the production of leghaemoglobin. Molybdenum probably exists as a coenzyme and functions alternately as an electron acceptor and donor in the reduction of ammonia.

Ammonia formed in the process of biological nitrogen fixation is subsequently used for the synthesis of amino acids. Then, amino acids are transported through phloem to other parts of the plant where they are needed.

Oxidation of ammonia to nitrate in the soil may occur through the mediation of two groups of bacteria. Nitrosomonas and Nitrobacter.

Conversion of nitrate to nitrous oxide (N2O) and nitrogen gas through the mediation of a variety of soil organisms is said to be denitrification.

The process of denitrification, which ends in the release of nitrogen gas to the atmosphere, completes nature’s complex nitrogen cycle.

Roots of most of the higher plants absorb nitrogen from the soil in the form of nitrate (). Nitrogen is this form, however, cannot be directly used by the plant and it must be reduced to ammonia before it is incorporated into the nitrogenous compounds of the plant.

Nitrate reductase is a metalloflavoprotein that catalyzes the reduction of nitrate to nitrite.

Nitrite reductase is also a metalloflavoprotein which does not require Mo but may contain Cu and Fe.