Plant Growth And Development of Class 11

The term hormone (Excitant-activator) was first used by Starling

Auxins are defined as an organic compound characterized by its capacity in low concentration to induce elongation in shoot cells and inhibition of elongation of root cells.

Darwin (1880) who found that light falling on the tip of a grass coleoptile, from one side causes some influence to be transmitted downward due to which the coleoptile curves towards the light. When the coleoptile tip is removed phototropic response does not occur.

Boysen-Jensen (1910-1913) found that when an excised coleoptile tip was replaced without or with gelatin inserted in between the two, phototropic curvature resulted as in normal coleoptile i.e., tropic stimulus passed over the incision. He further found that insertion of mica plate on shaded side prevents curvature following unilateral illumination of the tip. When the mica sheet was inserted on illuminated side curvature resulted in the usual way. It was concluded that a substance migrates down the dark side promoting curvature towards light. 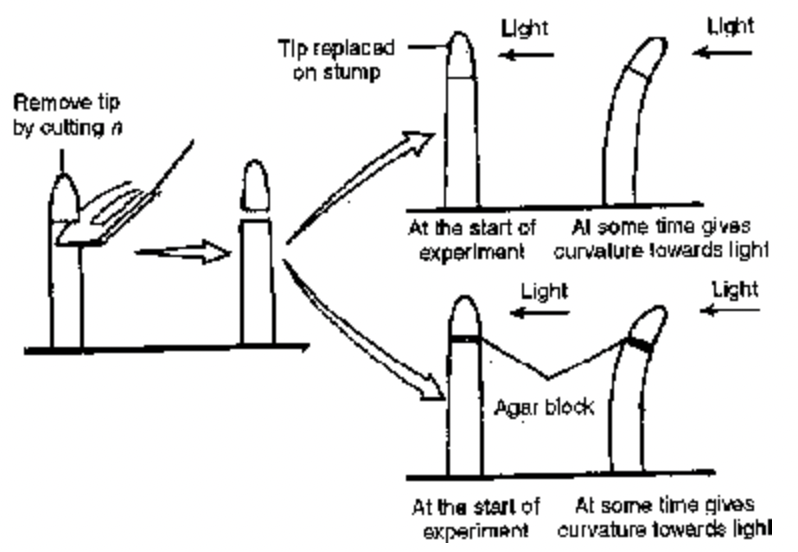 Went (1928) found that when an Avena coleoptile is decapitated its growth in length ceases. He further found that if we take tips and place them on an agar block for sometime and then placed on coleoptile stump, there is a curvature in coleoptile and this is proportional to the amount of auxin in agar.

The growth promoting substance was named by Went as auxin.

Kogl and Haagen Smith isolated three chemicals from human urine. They were named as auxina a, auxin b, and heteroauxin. Kogl et al (1934) found that heteroauxin is the real plant auxin and is chemically indole 3- acetic acid or IAA.

Cell Division : Auxin is known to promote division in the cells of vascular cambium.

Apical Dominance : Apical dominance is the phenomenon by which presence of apical bud does not allow the nearby lateral buds to grow.

Inhibition of Abscission : Auxin delays abscission of leaves and fruits. Its effect is through nonformation of abscission zone below a leaf or fruit.

Sex : Auxins have a feminising effect on some plants.

Flowering : NAA and 2, 4-D are often employed for inducing flowering in Litchi and Pineapple.

Gibberellins are weakly acidic growth hormones having gibbane ring structure which cause cell elongation of intact plants in general and increased internodal length of genetically dwarf plants, in particular.

They are weakly acidic plant growth hormone which possess gibbane ring structure are able to bring about cell elongation of both leaves and stem.

About 100 gibberellins are known

Gibberellins are synthesized in plants in leaves of buds, developing embryos and root tip.

Skoog and Miller (1954) discovered a substance (Kinetin) from DNA (obtained from Hering fish sperm), which increased cell division activity in tobacco pith culture. This substance was chemically found to be 6-furfuryl amino purine.

They are gaseous plant hormone. Crocker (1930) reported presence of ethylene from plant organs and named it as gaseous hormone.

Burg (1962) established that ethylene is the only gaseous growth regulator.

Ethylene is more synthesized in nodal regions. Biosynthesis of ethylene occurs from methionine (a sulphur containing amino acid), which serves as a precursor of ethylene in all higher plant tissues.

Ethylene and fruit ripening : In most of the plants, there is a sharp rise in respiration rate near the end of the development of fruit, which sets in progress those changes, which are involved in ripening of fruit. This sharp rise in respiration is called ‘Climacteric rise’ or ‘Climacteric’ by Kidd and Went (1930). Ethylene is responsible for early climacteric or fruit ripening.

Carns and Addicott (1961-65) discovered 2 substances from cotton, i.e., Abscisin-I from old cotton bolls and Abscisin II from young cotton bolls, both of these are capable of inducing abscission of leaves.

Eagles and Wareing (1963) discovered another substance ‘Dormin’, capable of causing dormancy of seeds.

ABA is a naturally occuring growth inhibitor in plants.