Plant Growth And Development of Class 11

Garner and Allard are the first to use the term Photoperiodism. Photoperiodism is the response of the plant to the relative length and timings of light and dark reactions.

There are following 5 photoperiodic classes of plants :

It is the length of photoperiod above or below which flowering occurs, Xanthium is SDP and its critical day length is 15 hrs.

Florigen = Gibberellins + Anthesins : Its chemical nature is still unknown but it is believed to be

Organ of reception of photoperiodic stimulus

Leaves are the organs of reception of photoperiodic stimulus which is experimentally verified by grafting experiments.

Borthwick and Hendricks (1952) reported a photoreceptive pigment called ‘phytochrome’. It is a bright blue or yellowish pigment. Phytochrome occurs in 2 forms, i.e., PRand PFR and these 2 forms are interconvertible.

Vernalisation is the low temperature treatment given to water soaked seeds, slightly germinated seed or seedlings to hasten the time of flowering of plants that will develop from them.

Some plants require low temperature treatment for flowering. This was first of all reported by Klippart (1859)

Site of vernalization is apical meristem or all the meristematic cells.

As a result of vernalization, a flowering hormone called ‘vernalin” is formed (reported by Melchers) but verrnalin has never been isolated.

Devernalization : Once a plant is vernalized (0–5°C for few days or few hours), it can be devernalized by exposing the plant to temperature of 30°C or above.

The cytoplasm of many living cells moves around the vacuoles. It is called streaming movement, It is of the following two types.

Rotation : It can be seen in the cells of the young leaves of Vallisneria, Hydrilla, Elodea and Chara.

Circulation : Circulation can be seen in the staminal hairs of Tradescantia and young hairs on the vegetative parts of many Cucurbitaceae.

The paratonic movements of locomotion are known as tactic movement or taxism.

Phototactic movements : Some algae (Chlamydomonas) have a photosensitive eye-spot which determines the movement of organisms towards the source of light.

Chemotactic movements : In many Bryophytes and Pteridophytes the male gametes move towards the archegonia.

Movement of curvature have been classified into following two types

Autonomic movements of growth : These movements are determined and affected by internal factors.

Epinastic movements. When movement occurs due to more growth on the upper side of the organ than on the lower side of organ, it is called epinastiy.

Hyponastic movements. When movement occurs due to more rapid growth on the lower side than on the upper side of growing organ, it is known as hyponasty.

Nutations : Such autonomic growth movement is shown by the growing stem of twiners and tendrils.

Paratonic movements of growth : These movements of growth due to external factors are called tropic movements and are shown by fungi, bryophytes, ferns and all seed plants. Bending or curvature of any organ is due to differential growth of the two lateral sides. The rate of growth of these two sides is affected by many factors such as light (phototropism), gravity (geotropism), water (hydrotropism) and chemicals (chemotropism).

Geotropism can be demonstrated in the laboratory by an apparatus called clinostat. It consists of a rod which is attached to a motor at one end and has a disc at the far end. A flower pot containing a seedling is fixed horizontally to the disc. The motor rotates the rod at a fixed speed. In a vertically placed pot shoot always grows upward and root downward towards gravity. 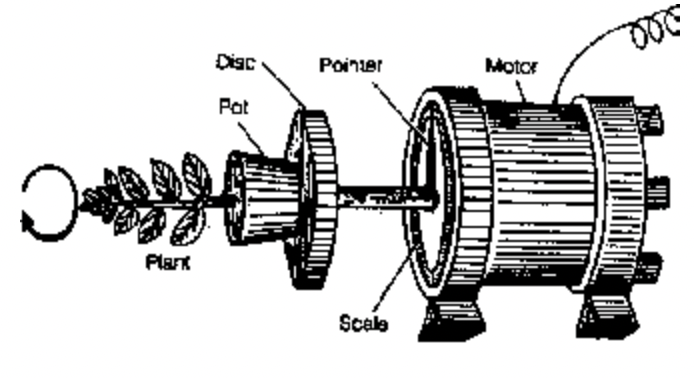 Hydrotropism : Growth movements in plant organs in response to variations in the amount of moisture are known as hydrotropism. Roots are positively hydrotropic, i.e., they grow towards water.

Chemotropism : The movement of plant organs due to the unilateral stimulus of chemicals is called chemotropism. The growth of pollen tube from stigmatic surface into the style and ovary is due to chemical stimulus.

Thigmotropism (Haptotropism) : The growth movement of plant organs in response to unilateral stimulus of touch is known as thigmotropism. Tendrils of many cucurbitaceous plants mutate in the air and when come in contact of any support, they coil around it.

Autonomic movement of variation : The most common example of such movements is the Indian Telegraph Plant, Desmodium gyrens.

Paratonic movements of variation : Many external stimuli like light, temperature, touch, etc., bring about temporary changes in the plant.

Nyctinasty : Certain leaves as well as flowers open during the day and close at night. These so-called sleep movements, brought about by the alternation of day and night, are called nyctinasty.

Photonastic movements are shown by many members of Leguminosae.

Floral heads of Compositae and flowers of Nymphaea and some cacti open in the presence of light.

Thermostatic movements are also shown by many flowers. The flowers of Crocus (saffron) open at high temperature and close when temperature is lowered.

Thigmonasty (Haptonasty) : These movements occur due to stimulus of touch and can be observed in insectivorous plants (e.g., Drosera).

Seismonasty : The leaves of Mimosa pudica droop rapidly when touched. This shock movement of sensitive plant is known as seismonasty is due to change in the turgidity of the cells at the leaf base.

Besides, seeds of some species require light for germination while others can germinate in total darkness. If all these conditions are available, living seed germinates easily.

Oxygen. During germination embryo resumes growth and for this energy is required. This energy comes from the oxidation of food material stored in the cotyledons or the endosperm which requires oxygen.

Water. In dormant seeds the food material is stored in concentrated form and, therefore, have low physiological activity. Water is essential for germination so that the concentrated food is converted in the form that may be utilized by the seedling. Water also serves as a medium where enzymatic reactions occur. Besides, the seed coat becomes soft after absorbing water and allows the expanding embryo to come out of it. Usually the moisture present in the soil sufficient for germination, but some seeds, particularly those with hard seed coat or growth inhibitors, require more water. However, the seeds do not germinate if they are completely immersed in water because under such conditions they do not get enough oxygen due to its poor solubility in water.

Temperature. A number of physiological processes occur within the seed during germination. Therefore, suitable temperature is always a necessity for germination. The range of optimum temperature varies greatly in different types of seeds. However, most of the seeds fail to germinate below 0º C and above 48ºC.

As  mentioned earlier, the seeds of most of the species germinate if the conditions necessary for germination are available. But mature and viable seeds of some plants, like Cucurbita, Xanthium and Ginkgo fail to germinate even when provided with best conditions. Inability on the part of the viable seeds to germinate under suitable conditions is known as seed dormancy. Some of the common causes of dormancy are as follows :

Seed coat is impervious to water.

Seed coat is impervious to gases.

Presence of rudimentary or immature embryo.

Presence of chemical inhibitors in the seed coat.

Dormant seeds germinate only when the causes of dormancy are removed. Seed domancy is of great ecologial importance. It indirectly helps the survival of the seedling by preventing germination of seed during adverse conditions.

Viability is the capacity of mature seeds to germinate. At the end of period of viability the embryo becomes dead. It loses the property of germination. The seeds can remain in living condition when stored properly in dry conditions free from insects and fungi. The period for which seeds retain their viability varies greatly. Nelumbo nucifera (= Nelumbium speciosum, Indian lotus; Hindi; Kamal) is reported to have exhibited longest period of viability (1000 years)

Epigeal germination. In seeds with epigeal germination the cotyledons are brought above the ground due to the elongation of the hypocotyl. In cotton, papaya, onion and castor, flat green leaf like cotyledons can be seen in the young seedling. Here the cotyledons, besides food storage, also perform photosynthesis till the seedling becomes independent. In some other plants like tamarind and bean, the cotyledons being thick, do not become leaf like; they shrivel and fall off.

It is a special type of germination found in mangrove plants (e.g., Rhizophora, Heritiera, Ceriops and Avicenia). In this process, the embryo does not undergo any period of rest and the seed germinates inside the fruit while it (fruit) is still attached to the parent plant. The radicle elongates considerably and projects out of the fruit. The lower part of the radicle becomes thick and swollen. Finally, the seedling breaks off the parent plant due to its increasing weight and gets embedded in the muddy soil below. Soon lateral roots develop at the basal end of the radicle.