The unpaired cartilages are Thyroid, Cricoid and Epiglottis. Thyroid cartilage is hyaline type largest cartilage of larynx. In males it is larger and protrude in the neck area where it is called Adam’s apple. Thyroid constitutes most of the body of larynx and covers it like a shield. Cricoid is a signet ring shaped cartilage and constitute the inner part of the larynx.

Epiglottis is yellow elastic cartilage and covers the glottis like a flap.

The paired cartilages are Arytenoid, Cuneiform and Corniculate. Arytenoid is pyramid shaped and forms the lateral wall of larynx. Between thyroid and arytenoid elastic ligaments are present. These ligaments are called vocal folds. One of them is anterior while the other is posterior. The anterior fold is called False vocal fold and maintains the air pressure while the posterior vocal fold is called True vacal cord which vibrate to produce sound.

It of about 12 cm length and 2.5 cin m diameter and joins the pharynx to branchi point of Broncbi. It is supported by dorsally incomplete (C-shaped) rings of hyaline cartilage and lined by Psudostratified cilliated columnar epithelium. All the cillia of trachea and bronchi beats towards pharynx and push the mucus along with it. This cilliary movement help in the cleansing of lungs.to lungs of their side 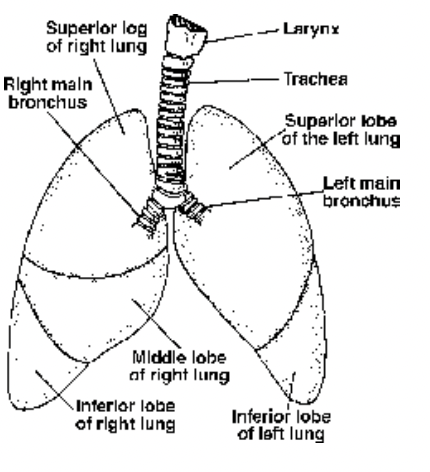 The right and left lungs are divided into three and two lobes respectively. Left lung contains a concavity called the cardiac notch in which lies the heart. The right lung is thicker and broader but shorter than the left lung because the diaphragm is higher on the right side to accommodate the liver lying below it. Inside lungs bronchi keeps on dividing during this division the cartilage rings become smaller and irregular. Within lungs it branches into bronchioles—primary, secondary and tertiary (or terminal) bronchioles leading to alveoli.

Bronchioles are without cartilaginous rings. They are lined by cuboidal or columnar epithelium along with surfactant producing Clara cells. Terminal bronchioles are the smallest while respiratory bronchioles is the first structure through which ventillation is possible. Though respiratory structures before respiratory bronchioles do not participate in gaseous exchange but they do remain filled with air. This air is called Dead space Air and the space is called Dead Space.Terminal (or respiratory) bronchioles divide to form many alveolar ducts or atria with many alveoli around. Exchange of respiratory gases takes place here by simple diffusion across the alveoli and capillary walls. Lungs contain 300-400 million alveoli with surface area of 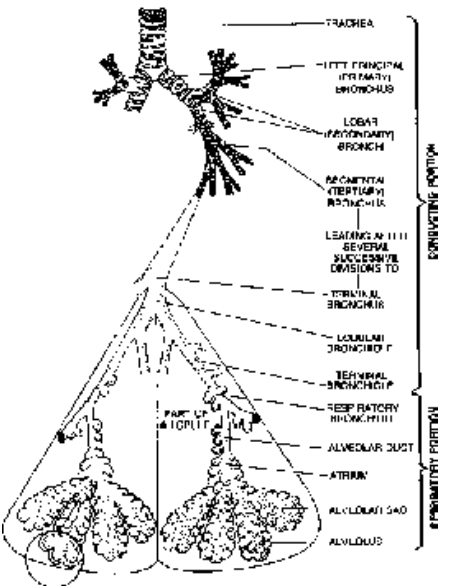 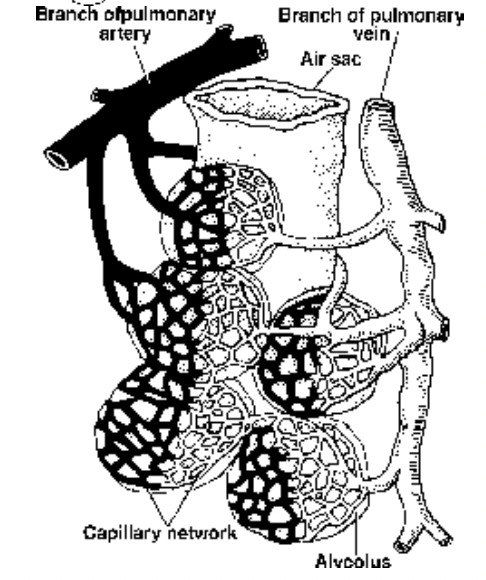 Fig. Bronchiolar branching and their connection with alveoli Fig. Blood circulation in respect to alveoli in lungs 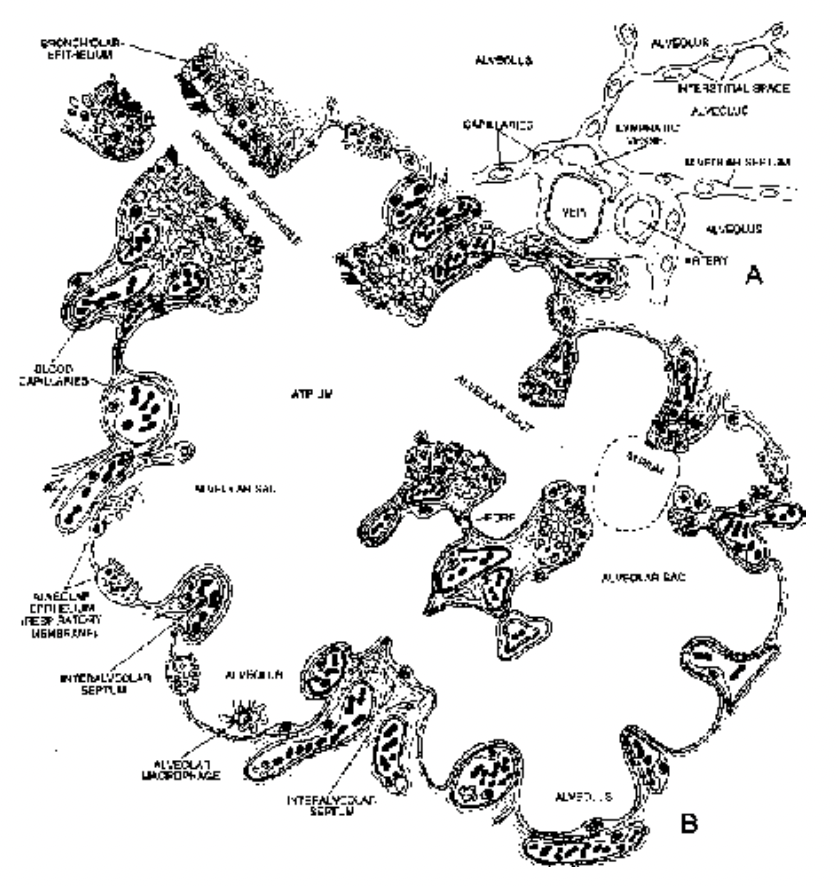 Fig. Microscopic structure of alveoli (A) and ultrastructure of respiratory portion of lungs (B)