The Living World of Class 11

Higher organisms can easily be differentiated as plants and animals, but lower organisms can’t be easily placed either in the plant or animal kingdoms because these possess dual characteristics of both kingdoms. For example,

Unicellular plants (diatoms, dinoflagellates) and animals (protozoans) resemble each other in level of organization and reproduction by fission but placed in two separate kingdoms.

Fungi are included in the kingdom Plantae despite the fact they lack chlorophyll, and cellulosic cell walls and are either saprophytes or parasites, unlike typical plants.

Some of the organisms like viruses and lichens can’t be placed in either of these two kingdoms because of peculiar characteristics.

It puts together eukaryotes with prokaryotes.

This system does not indicate the gradual evolution of early organisms into plants and animals.

Ernst Haeckel (1866), a German zoologist suggested that a third kingdom, Protista be created to include those unicellular microorganisms that are typically neither plants nor animals. He included bacteria, algae, fungi, and protozoa under Protista.

Three kingdoms according to Haeckel are Protista, Plantae, and Animalia.

This solves the problem of assigning suitable kingdoms to the organisms which have similarities with both plants and animals. Drawback :

The main drawback of this system is that fungi are not properly placed.

According to Robert H. Whittaker (1969), an American ecologist, non-chlorophyllous heterotrophic plants to be classified under kingdom Fungi. Five kingdoms in which the living world is divided are Monera, Protista, Fungi, Plantae/Metaphyta (Plantae) and Animalia/Metazoa (Animals).

The classification is based mainly on following three main criteria :

Evolution is reflected through an increase in the complexity of the cells, as well as in the organism. The mode of nutrition also diverged in the multicellular kingdom viz Plantae, Fungi, and Animalia. The ecological role of these three multicellular kingdoms was also established as producers, decomposers, and consumers, respectively.

The organisms, according to the Five Kingdom System, are re-distributed into additional three kingdoms while retaining the two kingdoms - Plantae and Animalia. All multicellular, mobile and heterotrophic organisms were included in the kingdom Plantae. Some of the unicellular algae and protozoans were taken out from plant and animal kingdoms and were included in a separate kingdom Protista. All bacteria and multicellular blue green algae with prokaryotic cells were transferred from kingdom plantae to a new Kingdom Monera. 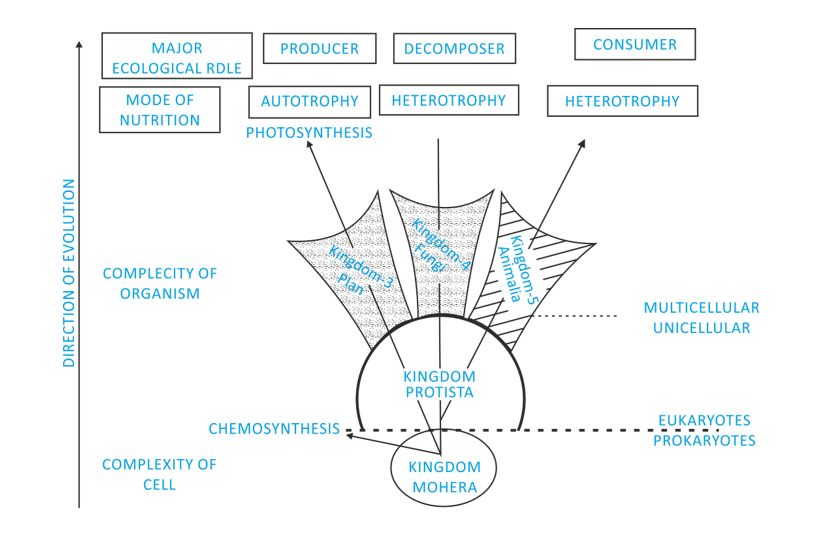 In the Five Kingdom classification, it is thought that the Monera has given rise to the Protista, which gave rise to the remaining three kingdoms of multicellular organisms, viz. Fungi, Plantae and Animalia.

This system seems more natural and indicates the gradual evolution of early organisms into plants and animals.

Kingdom Animalia has become more homogenous with the exclusion of protozoa.

Kingdom Plantae has become more coherent after the exclusion of bacteria, fungi, and some unicellular algal forms.

The creation of the kingdom Monera from prokaryotes is fully justified.

Some organisms like Euglena showing the mixotrophic mode of nutrition could be placed either in the plant or animal kingdom easily. The creation of the kingdom Protista including all unicellular eukaryotes, irrespective of the mode of nutrition, has resolved this problem.

Copeland (1956) created the group of Mychota for prokaryotes. It was called Monera by Dougherty and Allen (1960).

Algae are spread over three kingdoms-Monera (Cyanobacteria). Protista and Plantae.