They are found on decaying leaves and damp places and also as parasites.

Hyphal wall contains cellulose and other glycans in many members. In some cases chitin or fungus cellulose in also present.

Asexual reproduction is through zoospores as well as aplanospores. Both the kinds of spores are produced in sporangia.

It is a class of terrestrial fungi which are mostly saprotrophic and rarely parasitic.

The gametes are commonly multinucleate and are called coenogametes.

Sexual reproduction (Gametangial copulation) produces a resting diploid spore called zygospore. Because of the presence of zygospore, the group of fungi is called Zygomycetes. Zygospore differs from oospore in that during its formation a distinct food laden non motile large female gamete is not produced.

The mycelium consists of septate hyphae. Yeasts are an exception in that they are basically unicellular. Cell wall contains chitin or fungus cellulose.

Motile structures do not occur in the life cycle.

In majority of Ascomycetes, the common mode of asexual reproduction is through the formation of conidia, formed in chains exogenously.

Conidia are borne on branched or unbranched hyphae called conidiophores. They detach from the parent and form new mycelia.

Sexual reproduction is through auxospores, which are formed endogenously in a sac like structure called ascus (pl. asci).

The gametes invovled in sexual reproduction are non-motile, compatible and are generally represented as + and –. The fusion of gametes is followed by reductional division that produces ascospores, which on germination gives rise to new mycelium.

The asci may occur freely or get aggregated into specific fructifications called ascocarps. Ascocarps are of many types: apothecium (cup like, e.g., Peziza), perithecium (flask shaped e.g., Neurospora) or cleistothecium (closed e.g., Penicillium). The fructifications of some Ascomycetes are edible, e.g., morels, truffles, etc.

They are the most advanced and most commonly seen fungi as their fructifications are often large and conspicuous, e.g., mushrooms, toadstools, puff balls, bracket fungi, etc.

Basidiomycetes are among the best decomposers of wood. They are able to decompose both cellulose and lignin.

Motile structures or cells are absent.

Sexual reproduction does not involve sex organs. Instead fusion occurs between basidiospores and other monokaryotic spores, between a spore or spermatium and a hypha or between two hyphal cells of primary mycelia.

There is often differentiation of two mating types, (+) and (–).

Sexual reproduction actually causes plasmogamy or fusion of protoplasts without fusion of their nuclei. Karyogamy is delayed for long. The intervening phase is called dikaryophase. It produces a new mycelium called secondary mycelium.

Secondary mycelium is long lived. It consists of profusely branched septate hyphae in which the septa possess dolipore or central pore with barrel shaped outgrowths.

Karyogamy and meiosis occur in club shaped structures known as basidia (singular: basidium). The name of the class is given after them. 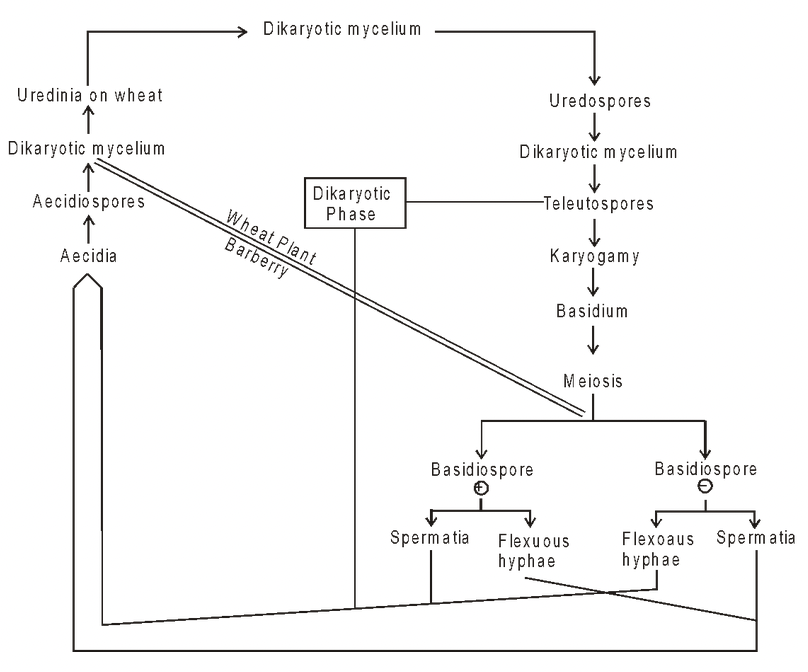 Deuteromycetes is an artificial class of fungi that has been created to include all those fungi in which sexual stage is not known or they have not been classified and placed anywhere else as yet.

The mycelium is usually septate. Coenocytic forms are not known.

Asexual reproduciton often occurs by conidia along with some other types of spores. In some cases even asexual spores are absent.

It is believed that most members of Deuteromycetes are actually Ascomycetes members in which sexual reproduction is either absent or yet to be discovered.

Plant body is mycelial and mycelium is branched, tubular, aseptate and coenocytic.

The mycelium consist of three types of hyphae stolons, rhizoidal hyphae and sporangiophores. Stolons grow horizontally, parallel to the substratum.

Rhizoidal hyphae, which penetrate into the substratum, anchor the body and absorb the nutrition, arise from the nodes of stolons.

Reproduction : It is vegetative, asexual and sexual.

Vegetative reproduction : This take place by fragmentation of hyphae.

Sporangia borne terminally and singly on unbranched sporangiophores, developed directly from the stolon above the rhizoids.

The sporangium is divided into peripheral fertile sporiferous zone and the central dome shaped sterile columella.

The sporangium dehisces due to the collapse of columella and the spores are dispersed.

The spores germinate under favourable conditions to form the new mycelium. 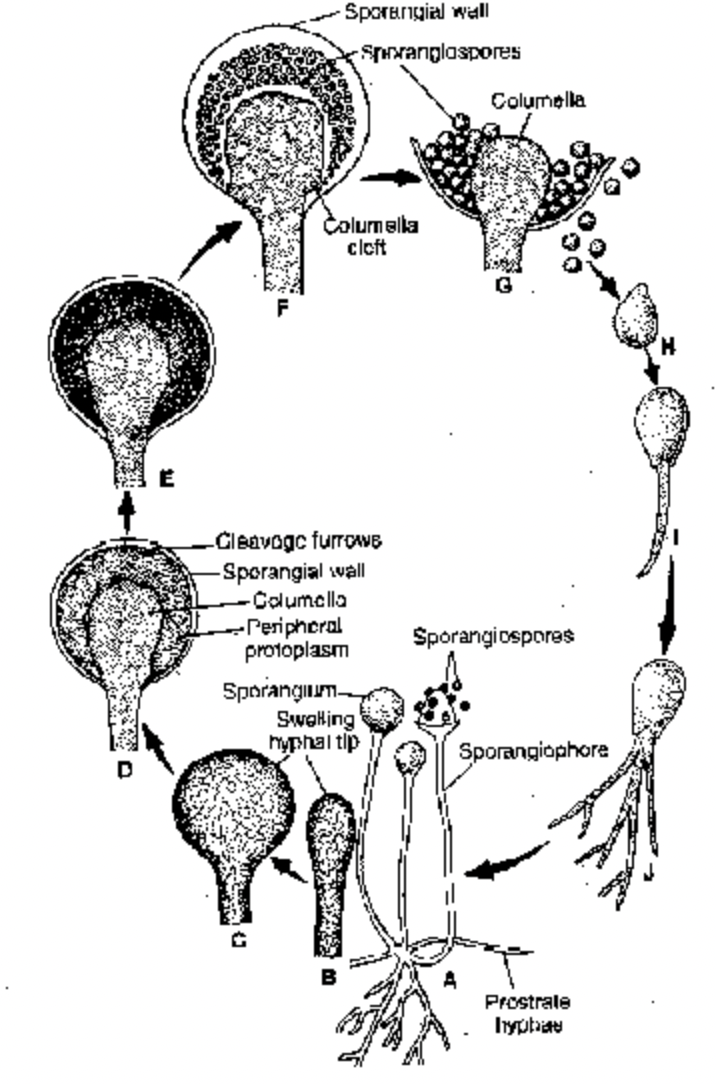 It takes place by the conjugation by two multinucleate aplanogametangia of opposite strains. (+ & –).

It is of isogamous type.

The two hyphae of opposite strains (+ and –) called zygophores either of the same mycelium or different mycelia come in contact and give rise to club-shaped progametangia.

Each progametangium forms a basal suspensor and a terminal coenogametangium.

The two gametangia fuse to form a multinucleate diploid coenozygote.

All the diploid nuclei of zygospore degenerate except one.

After a resting period, zygospore germinates. The wall layer except the inner most layer rupture. This wall comes out in the form of a tube called promycelium. 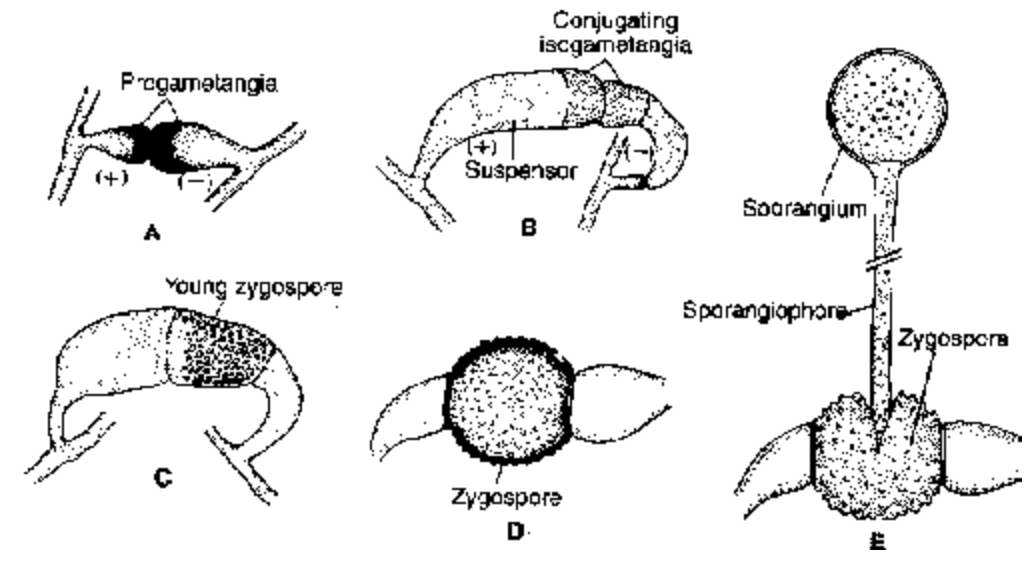 The thallus is non-mycelial, unicellular, generally-round, oval or elliptical in shape.

Cell wall is made up of glucan and mannan besides proteins, lipids and chitin.

In the vacuole lies in the nuclear recticulum with a nucleolus and a centrosome on the side.

Reproduction : It is vegetative and sexual.

Vegetative reproduction : Yeast reproduce vegetatively either by fission or by budding.

Sexual reproduction : No sex organs, direct fusion between vegetative cells (Hologamy). Sometimes sexual fusion occurs between a bud and its mother cell (Pedogamy). According to the Guillermond (1940) Three life cycle patterns are distinguishable among yeast.

♦ This is exhibited by Schizosaccharomyces octosporous. 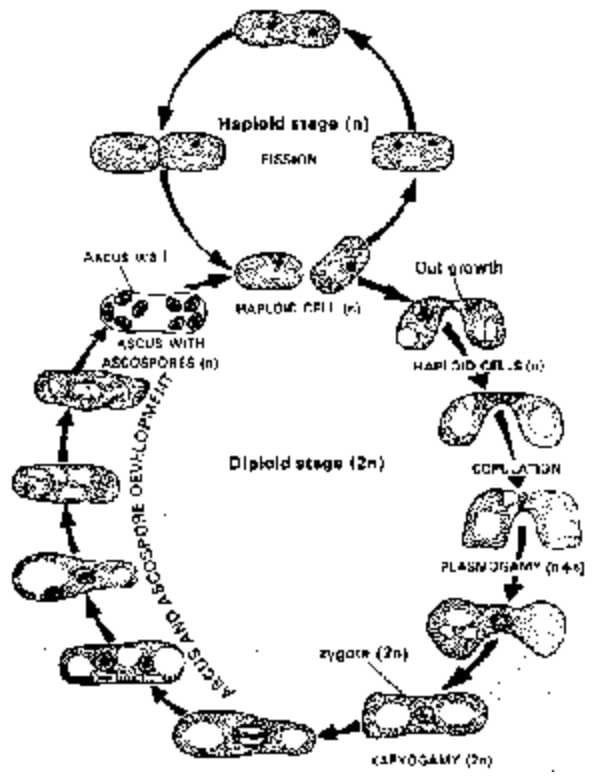 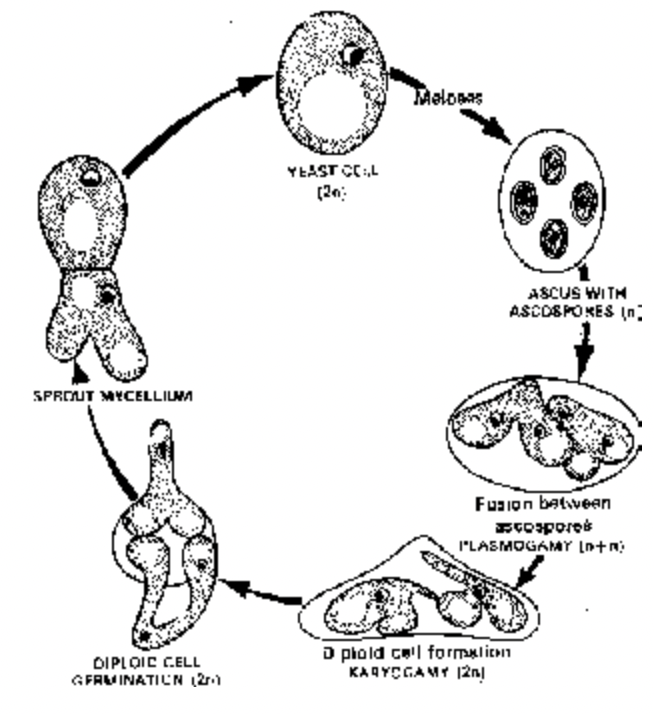 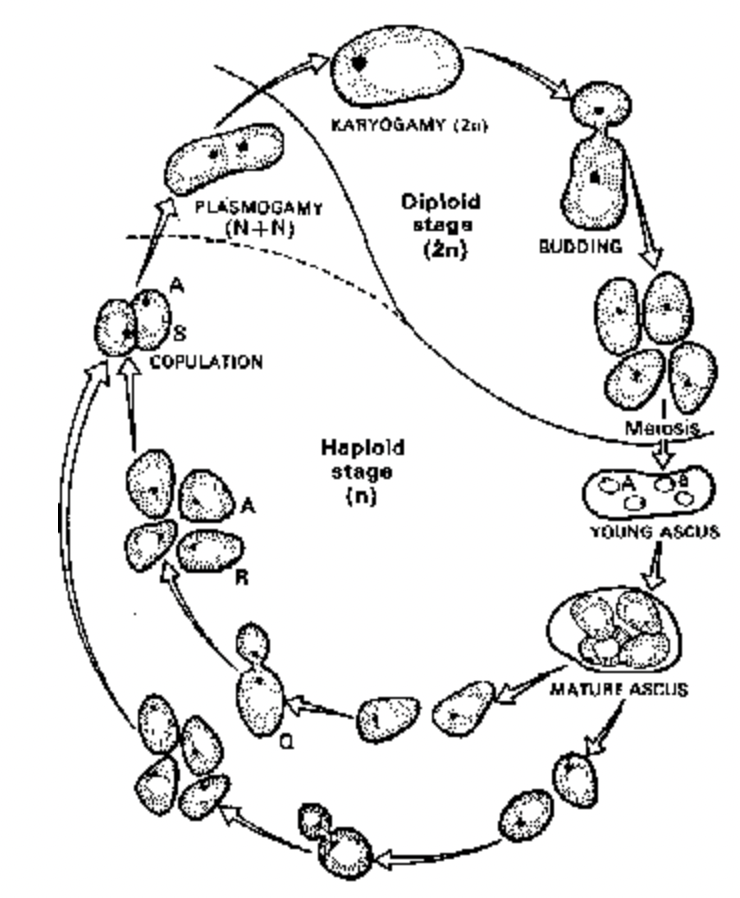 Occurrence : It is saprophytic fungus which grow on the ground in the field and lawns, woodlogs and manure piles. A-campestris is the most common form of mushroom which being edible is also cultivated.

Mycelium is septate and the septa are of dolipore type.

The dikaryotic mycelium form a circular colony inside the soil covering an extensive area the hyphae form rhizomorphs bearing fruiting bodies. They appear in the form of fairy rings.

Asexual reproduction : Most of the species of Agaricus do not reproduce asexually however a few species e.g. A-campestris do produce intercalary or terminal chlamydospores. 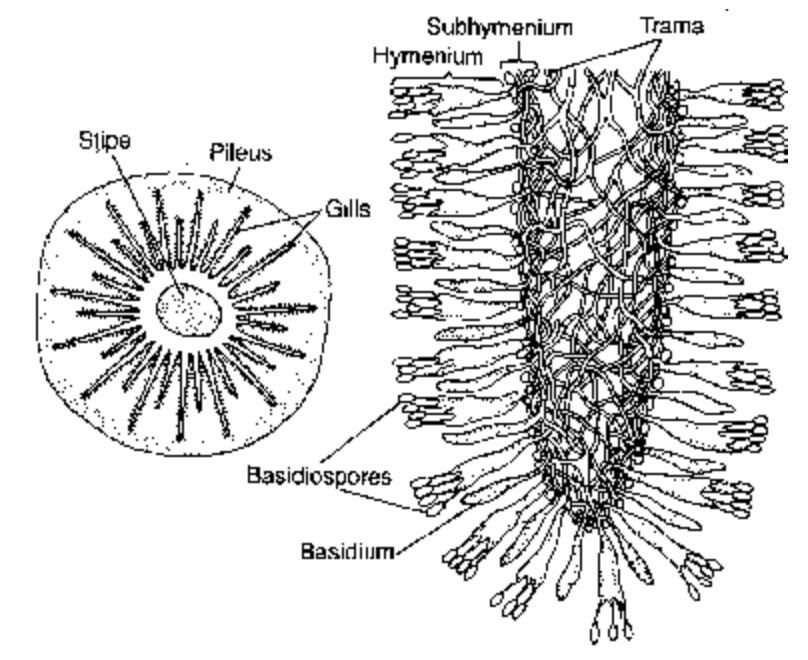 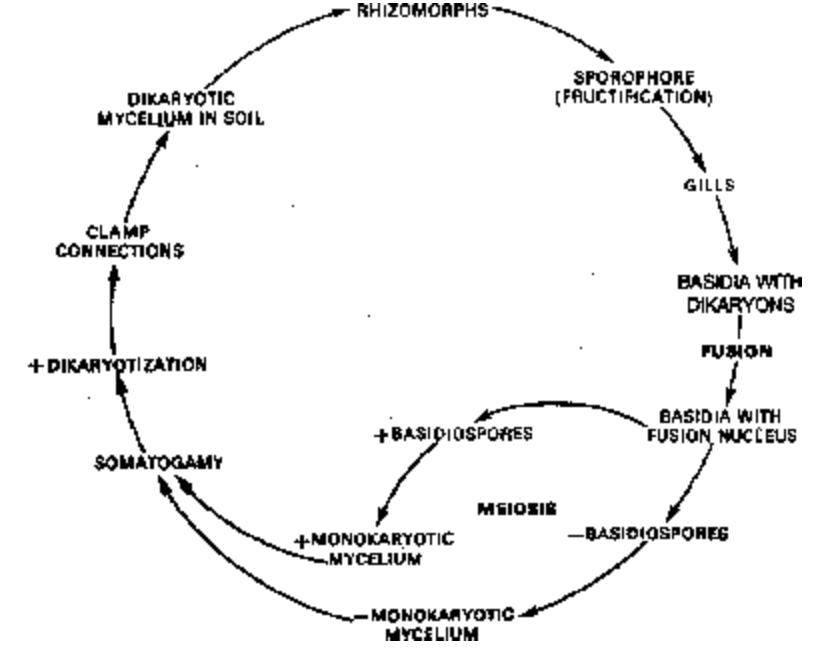 The stipe bears a membranous ring called annulus. In a section, the gill shows central  trama and a next zone of sub-hymenium covered with a fertile layer, the hymenium.

The hymenium consists of palisade like layer of club shaped cells called basidia.

The basidiospores on liberation germinate to form primary mycelium.

Fragmentation : Breaking of thallus into small fragments each of which regenerates to form a new thallus.

Soredia : These are grey coloured powder like formation present on the surface or margin of thallus. Each soredia consist of a small mass of hyphae in which several algal cells are entangled. On dispersal they form new thalli.

Isidia : These are small papillate outgrowth of blackish colour arising from the surface of the thallus. They also contain algal and fungal components. They are covered by a cortex. They are supposed to be photosynthetic in function but also participate in vegetative propagation.

Progressive death and decay of the posterior regions and growth in the anterior leads to the formation of new plants.

Pioneers of vegetation : The lichens are considered as pioneers in initiating a xerarch plant succession on the rocks. Crustose being the first, followed by foliose and finally fruticose lichens. They also initiate weathering of rocks into soil particles.

In Tanning and dyeing : Orchil or cudbear obtained from species of Roccella and Lecanora. Litmus, used as an indicator for acidity is also derived from Roccella.

In Cosmetics and Perfumes : The aromatic substances present in the lichen thalli are used for making perfume goods. Some species of Evernia and Ramalina yield essential oils.

In brewing and distilling: Some alcohols are prepared from Lichens eg. Cetraria islandica.

In Medicine : Lobaria pulmonaria is used for lung troubles, Usnea barbata for strengthening hair and for uterine ailments. Xanthoria parientina is used in Jaundice and Parmelia saxatilis for epilepsy. Peltigera canina is used against hydrophobia.

Indicators of air pollution : Lichens are very sensitive to SO2 and die at higher levels of SO2 i.e. they indicate SO2 pollution.