Fun With Magnets of Class 6

Any substance which possesses the following two properties is called a magnet.

(i)It attracts small pieces of iron towards itself.

(ii)It always comes to rest in the north-south direction when suspended freely on Earth.

Lodestone and magnetite’s are natural magnets because they are found in nature.

Artificial magnets are prepared by man to be used at any time and at any place. These magnets are much stronger than lodestone.

Let us take on arbitrary magnet and break into plates.

Therefore, even after breaking the magnetic into multiple pieces the North and South pair of poles are not lost until it is a magnet.

1.Bar Magnet: It is a magnet in the form of rectangular bar, and has two magnetic poles north (N) and South(S) of equal strength.

2.Magnetic needle: It is a magnet tapered towards both ends and pivoted at the centre. It is used to check the direction of a magnetic field and to map the lines of force of other magnets.

It consists of a magnetic needle pivoted at its centre and encased in a brass box with a glass top. It is used to find direction. 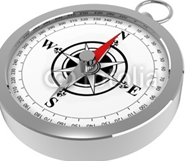 Illustration 1: Why does a compass needle get deflected when brought near a bar magnet?

Solution: A compass needle gets deflected due to forces acting on its poles due to the magnetic field of the bar magnet.