Fun With Magnets of Class 6

Magnetic Substance: Substance which is influence by a magnet is called as magnetic substance. Ex: Nickel, iron, cobalt, etc.

Non-Magnetic Substance: Substance which are not influenced by a magnet are called as magnetic substance.  Ex. Plastic, Aluminum, wood, copper, etc.

Differences between Magnet and Magnetic Substance

It is the region around a magnet in which other magnets or magnetic materials experience a force.

Let us take a plain white paper and spread some amount of iron filling over it randomly. 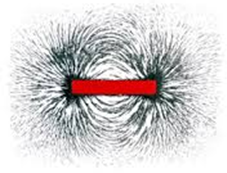 Now, let us place a bar magnet over the plain white paper. As we place the bar magnet we observe that the randomly spread iron filling gets oriented in a proper pattern around the bar magnet as shown.

It you carefully observe the orientation of iron filling then it can be noticed that they have aligned themselves along a curve line joining the north pole and south pole. This line is nothing but the magnetic field lines.

1.Magnetic field lines are directed from North Pole to South Pole outside the magnet (as seen from previous demonstration). 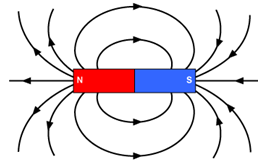 3.The tangent at any point on field line given the direct of magnetic field at that point.

4.Magnetic field lines never intersect each other because they repel each other. 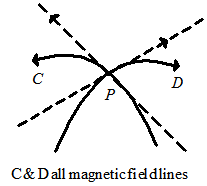 The situation shown in figure is not possible because at point P two tangents drawn one to curve C and curve D which gives two direction of magnetic field at a point which is absurd.

Hence, for a bar magnet in previous analysis we can say that intensity of magnetic field is high at poles and less in the middle region of magnet.