Mendel selected 7 pairs of pure or true breeding varieties as the starting material for his experiments. On self pollination or self breeding, a pure variety gives rise to offspring having similar trait. e.g., tall variety with tall offspring, a purple flowered variety with purple flowered offspring, etc. Mendel employed seven traits of characters for his experimentation, one from each variety.

Mendel performed reciprocal crosses between plants having alternate forms of a trait, tall and dwarf, red flowered and white flowered. In reciprocal crosses pollen of one form were dusted over the stigma of the other form and vice versa, e.g., pollen from flowers of tall plants to emasculated flowers of dwarf plants and pollen from flowers of dwarf plants to emasculated flowers of tall plants. The hand pollinated flowers were covered with paper bags in order to avoid contamination from foreign pollen. The cross in which only two alternate forms of a single trait or character are taken into consideration is called monohybridcross. Mendel also performed crosses involving two characters. They are called dihybrid crosses. Trihybrid and polyhybrid crosseswere performed as well. The seeds of the cross or crosses were collected and sown next year. The hybrid offspring including the seeds constitute the nextgeneration termed first filial or F1 generation.

Self Breeding for F2 and F3 Generations

The plants of F1 generation were allowed to covered with paper bags from the beginning. Mendel collected the seeds and raised a new generation of plants. The seeds and plants raised from them constitute the second final or F2 generation. Further self pollination produced F3 or third fillial generation. Mendel kept record of each generation and observed as follows. 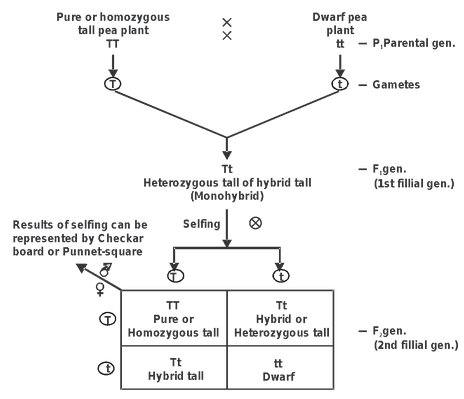 When F1 individual (Tt) is crossed with one of the two parents, either tall (TT) or dwarf (tt), such a cross is called the back cross.

There are two possibilities in such a cross :

Uses of a Back Cross

Back crosses are used by plant breeders to rapidly improve a variety by making a useful trait (gene) homozygous, that is pure. 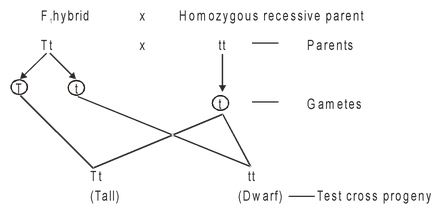 Uses of a Test Cross

The test cross reveals the genotype of an organism displaying the dominant phenotype, hence its name.

Mendel got the following results from his monohybrid crosses :

Conclusions Drawn from the Monohybrid Crosses

From the results of his monohybrid crosses, Mendel found out the following conclusions :–

Conclusions Drawn from the Monohybrid Crosses

From the results of his monohybrid crosses, Mendel found out the following conclusions :–

In his law of Segregation, Mendel predicted the occurrence of meiosis, long before it was discovered.

So in F2 generation of dihybrid cross :

Results of a Dihybrid Cross

Mendel got the following results from his dihybrid cross :–

Conclusion drawn from a Dihybrid Cross

From the F2 generation of a dihybrid cross, Mendel concluded as under :–

These 9 : 3 : 3 : 1 ratios for the pairs of traits are independent of one another and that combinations turn up as expected according to chance.

Given an independent assortment of the genes, this hybrid will produce eight kinds of gametes as follows :

In the F2 generation, produced by random union, these eight kinds of gametes, there will evidently be 64 possible combinations, as can be seen by constructing a checker board, representing the trihybrid cross

The eight phenotypically different kinds of peas will appear with approximately the following frequencies: