Cerebrum is largest part of the brain and is divided into four lobes each with areas that control respective functions as follows: 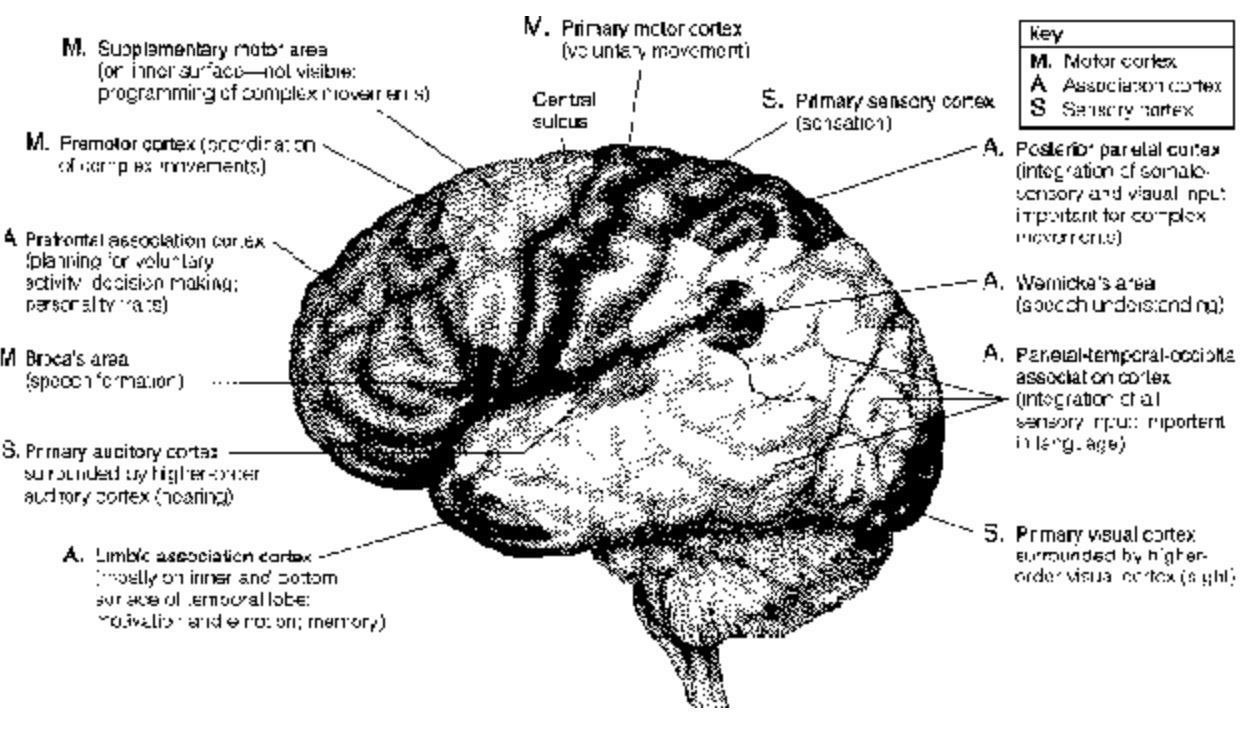 Fig. Functional areas of the cortex

Its roof is called epithalamus, having choroid plexus with blood vessels and on its dorsal surface there is epiphysis (or pineal body). In lower vertebrates there is parietal body or paraphysis also.

The floor is hypothalamus with ventral hypophysis (or pituitary gland) attached through infundibulum.

The thick lateral walls are the two optic thalami connected interiorly by middle or soft commissure (massa intermedia) and a Habenular commissure in the antero-dorsal part of the diocoel.

In front of the hypophysis there is crossed tract of nerves called optic chiasma that connects the left optic lobe with right cerebrum and right optic lobe with left cerebrum. In frog only cross fibres are present while in mammals straight fibres are also present beside cross-fibres. Hypothalamus constitutes 1/300th part of total brain mass (just 4 gm) in man. It integrates and control the autonomic (involuntary) functions, maintains homeostasis and equilibrium of the body. It is also the centre for thirst, appetite, satiation, love, anger, sex, satisfaction, metabolism, thermoregulation, behaviour related to fighting, fleeing and mating etc.

Septum as part of hypothalamus is the centre for sexual arousal.

The Limbic (or lip-like) System

This is the site of emotions, anger, fear, pleasure and instinctive behaviour. It includes interconnected parts of frontal lobe, temporal lobe, thalami and hypothalamus.

It is also associated with other related parts (motor areas) of the brain that control the responses like sweating, blushing, sobbing and laughing.

Amygdala is almond-shaped bulge of neurons attached to both the tips of the fork (of limbic system). It is like defence castle to control the moods (anger and rage).

Hippocampus is the swollen lower lip of limbic fork, this controls the signals of smell and memories, converts informations of short term memory into long term memory i.e., for learning.

In human it includes the area between thalamus and spinal cord as mid brain, medulla oblongata, pons varoli.

All the nerve fibres which relay signals of afferent input and efferent output between spinal cord and the cerebrum, pass through it. 10 out of 12 cranial nerves, emerge from here.

A core of tissue called reticular formation running through entire brain stem is composed of highly branched neurons (called nuclei) which receive and integrate information from many afferent pathways.

The small part, also remains covered by cerebrum. It mainly consists of dorsal optic lobes. In frog there are only two large optic lobes, corpora bigemina with optocoel. But, in mammals there are four smaller solid lobes corpora quadrigemina, the anterior pair is called superior colliculi and posterior pair as inferior colliculi, responsible for visual and auditory reflexes respectively.

A pair of tract of nerve called crura cerebri (or cerebral peduncles) is situated on ventral side connects the cerebral cortex with cerebellum and controls semi-automatic movement.

The posterior part of brain has two main parts cerebellum and medulla oblongata.

It constitutes about 1/8th of the size of cerebrum situated below occipital lobe connected with ventral brain stem by three peduncles, with the lateral halves, cerebellar hemispheres.

Its outer surface (cortex of gray matter) has a large number of gyri and sulci. Medullary solid part is filled with white matter called arbor vitae (tree of life).

In rabbit it is five lobed: a pair of lateral lobes each with bunches of small floccular lobes and a median lobe called vermis.

In frog it is less developed, cylindrical and hollow structure transversely placed on the dorso-anterior part of hind brain.

It acts as executive of the cerebrum to run the initiated voluntary muscle actions.

It is the posterior most rhomboidal part with large number of sensory and motor nerve connections. On its dorsal surface there is a colored part, posterior choroid plexus with network of blood vessels fused with piamater.

Outside the cranium it extends out as spinal cord with large number of sensory and motor nerves crossing from one side to other. Reticular formation connect the thalami with major

nerves in spinal cord hence acts as gatekeeper to consciousness.

It is situated on ventral side of the cerebellum.

Carries impulses from one hemisphere of cerebellum to the other.

Helps in coordination of muscle movement of two sides of the body.

Possesses pontine (or pneumotaxic) centre, the component of respiratory control.

It is a cylindrical, cord-like, uniform extension of medulla oblongata, (42 - 45 cm long and 2 cm thick in man) runs from neck to lumbar region through the neural canal of vertebral column, ends in a thin prolongation called filum terminale. It stops growing beyond 4-5 years of age. Here white matter is outside and H-shaped grey matter is inside.

The spinal canal with CSF is lined with ciliated ependymal cells.

In frog the grey matter is rectangular while in mammal it is butterfly shaped.

The interneurons synapse with motor neurons in the ventral horn and leave the spinal cord via the ventral root.

From the thorax region downwards, a lateral horn is present between dorsal and ventral horns that contain the cell bodies of the preganglionic autonomic neurons.

It acts as a coordinating centre for reflexes like knee-jerk response, contraction of the urinary bladder etc.

Provides buoyancy to brain, (net wt. of brain is reduced from 1.4 kg to 0.18 kg) hence pressure at the base is reduced.

Excretion of waste products. Carries nutrient, respiratory gases and hormones from blood to the remote parts of brain.

It is spontaneous, involuntary and immediate response generated at the non-conscious level stimulated through specific receptors. The sensory impulse is directly and automatically converted into a motor effect through nearest part of CNS operating in a manner of reflex arc. e.g., touching the lower limb of a decapitated frog with acid swab causes withdrawal of limb, centre of this reflex is the spinal cord hence if it is damaged the reflex disappears eg. knee jerk reflex, sudden blinking of eye.

Reflex arc is the pathway of impulse from receptor to effector as follows;

The direct contact between sensory and motor neuron is made within the CNS.

Examples: Taste of milk causes salivation in a newborn though it has not tasted it before; salivation in dogs by sight or smell of meat; constriction of pupil in newly born baby if illuminated with bright light. 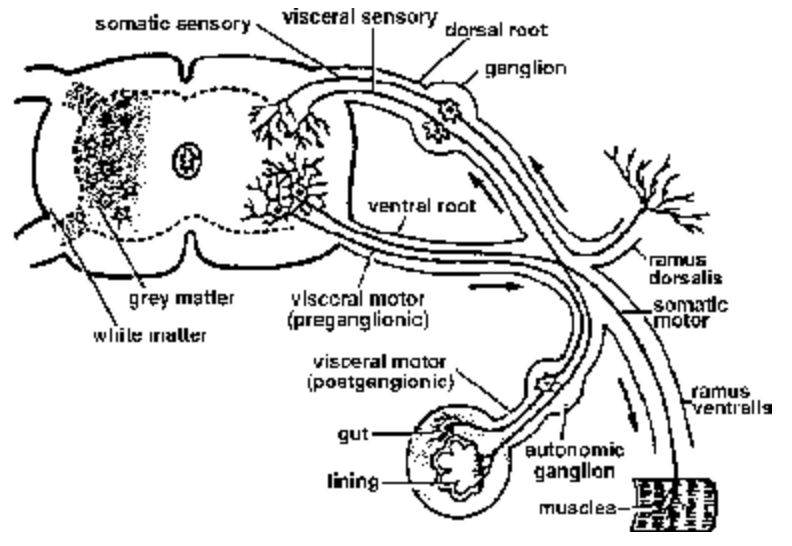 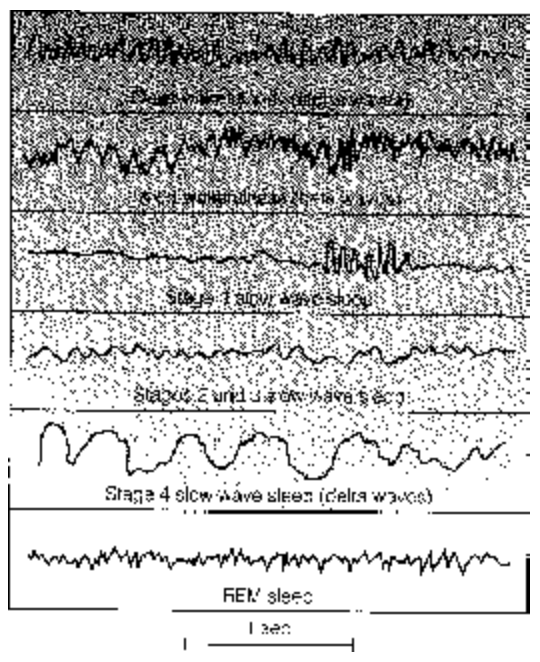 Analysis of waves are complicated because the postsynaptic potentials are both excitatory and inhibitory types, some are near surface others are deeper.

Analysis of waves are complicated because the postsynaptic potentials are both excitatory and inhibitory types, some are near surface others are deeper.
Frequency of waves may vary from 1 to 30 Hz and their amplitudes also vary.

These are 10 pairs in anamniotes and 12 pairs in amniotes (except snakes), first 10 pairs are common and homologous in all vertebrates.

The name, origin and nature of these nerves are as per the following table:

Trigeminal and Abducens nerves emerge through Gasserian ganglion located within the cranium.
The facial nerve in frog passes through the Gasserian ganglion but in mammal it passes out through Geniculate ganglion.
Glossopharyngeal and Vagus nerves in frog pass out through jugular ganglion but in mammals they pass through vagus ganglion all situated within cranium. Motor component of vagus nerve controls sound production; 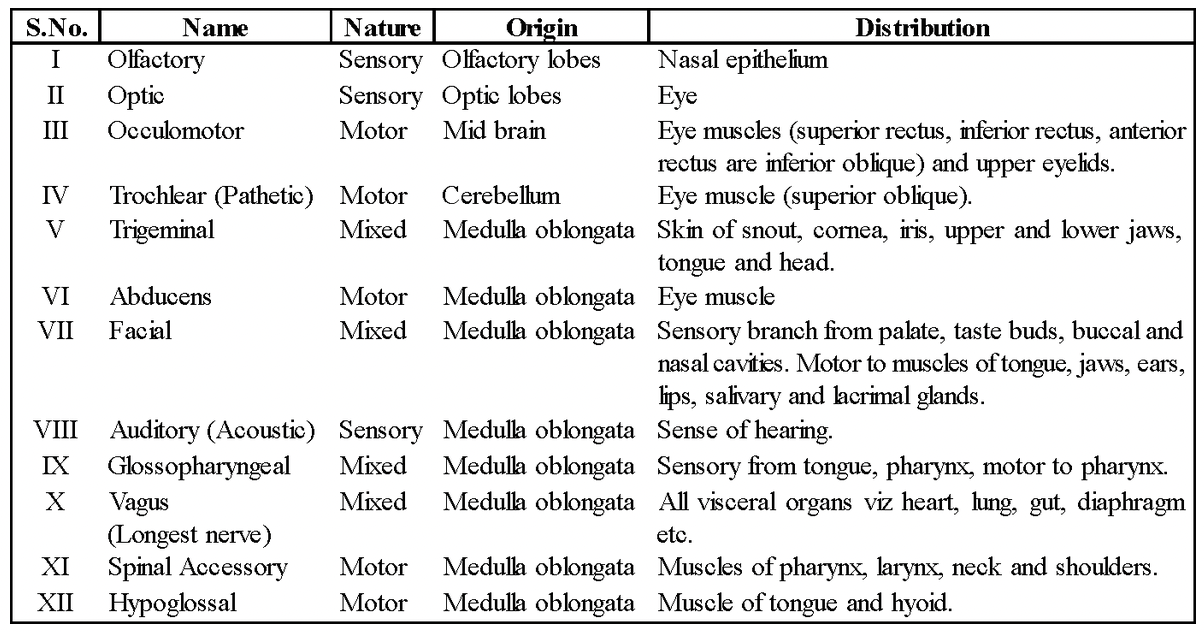 These nerves originate from the spinal cord and innervate the nearby parts of the body.
The numbers generally relates to the number of vertebrae (e.g., 10 pairs in frog). In man these are 31 pairs (rabbit 37 pairs). 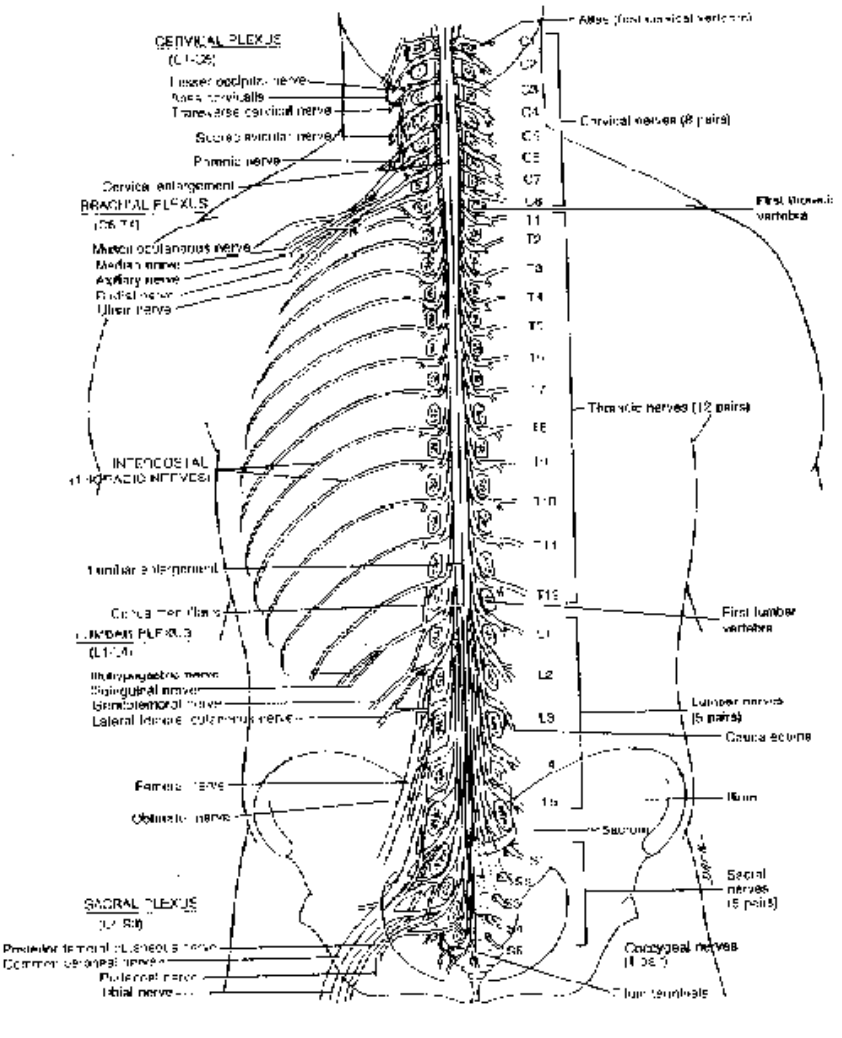 Both dorsal and ventral roots unite together just outside the spinal cord and immediately divide into following three branches: