Source Of Energy of Class 10

The various types of conventional sources of energy are as follows:

Fossil fuels are the remains of the prehistoric animals or plants, burried under the earth, millions of years ago.

Fossil fuels are formed in the absence of oxygen. The chemical effects of pressure, heat and bacteria convert the burried remains of plants & animals into fossil fuels like coal, petroleum and natural gas.

It was the sunlight of long ago that made plants grow, which were then converted into fossil fuels. Fossil fuels are energy rich compounds of carbon, which were originally made by the plants with the help ot sun's energy.

The various types of fossil fuels are:

It is the most abundant fossil fuel on the Earth which is essentially carbon. It is used as a combustion fuel. The exploitation of coal as a source of energy made the industrial revolution possible. Increasing industrialization has led to a better quality of life all over the world. Coal is the principal source of heat for electricity generation and is used as a reducing agent (coke) in heavy industries like iron and steel.

Petroleum (also called crude oil) is a thick black liquid and is not used as fuel in its natural form. It is refined by the process of fractional distillation to obtain a number of useful components like fuel oil, kerosene, diesel oil, petrol or gasoline and petroleum gas. On liquefaction, petroleum gas changes into a liquid which is called liquefied petroleum gas (LPG). It is used for cooking.

Efficiency and use of Fossil Fuels:

The pollution caused by burning fossil fuels can be reduced by increasing the efficiency of the combustion process and using various techniques to reduce the escape of harmful gases and ashes into the surroundings. Besides being used directly for various combustion process, fossil fuels are the major fuels used for generating electricity, a form of energy which has become a necessity in today’s scenario.

A “thermal” power plant as the name suggests generates electric power from large amount of heat produced by burning fossil fuels, i.e., coal and petroleum. Fossil fuels are burnt in large amounts in power stations to heat up water to produce steam which further runs the turbine to generate electricity. Transmission of electricity is more efficient than transporting coal or petroleum over the same distance. Therefore, many thermal power plants are set up near coal or oil fields. 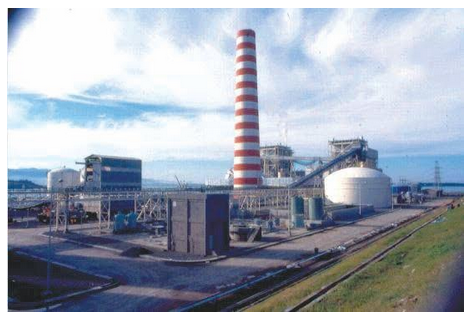 Solar energy appears in the form of energy of water flowing in the rivers which is obvious from the water cycle in nature.

A quarter of our energy requirement in India is met by hydropower plants. Since there are very few waterfalls which could be used as a source of potential energy, hydro power plants are mostly associated with dams. 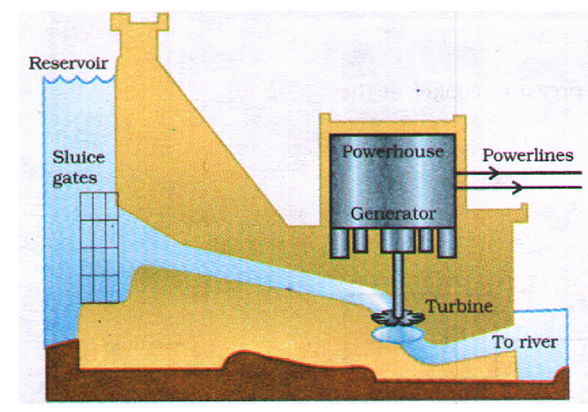 A schematic view of a hydro electric power plant

Steps for generation of hydro electricity

The various steps for generation of hydro electricity are :

(a) Water is collected in storage dams (high rise structure) where kinetic energy of flowing water is transformed into its potential energy.

(b) Water from the dam is allowed to fall through pipelines over the blades of a turbine at the bottom of the dam. The potential energy of water changes into its kinetic energy which is transferred to the turbine.