The place (or surroundings) where a plant or animal lives is called its habitat. Some of the examples of habitats are : Deserts, Mountain regions (or Hills), Forests, Grasslands, Garden, Fields, Soil, Homes, Tree, pond, Lake, River, Ocean (or Sea) and Sea-shore.

All the habitats can be divided into two main groups: 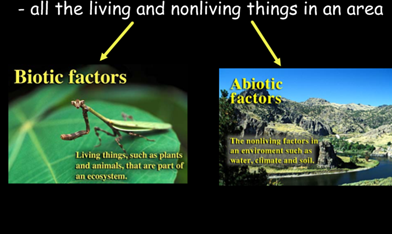 Camel lives in hot desert where water is scarce. The body structure of a camel helps it to survive in desert conditions) Camel is adapted to live in a desert because of its following special features :

3.            A camel's body is adapted to save water in the dry desert as follows : A camel passes small amount of urine; its dung is dry and it does not sweat. Since a camel loses very little water from its body, it can live for many days without drinking water. 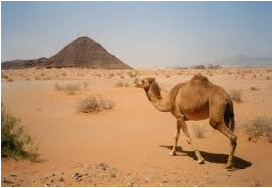 5.            A camel has large and flat feet which help it to walk easily on soft sand (by preventing it from sinking into soft sand).

The fish lives in water (in a pond, lake, river or ocean). The body structure of a fish helps it to survive inside water. The fish is adapted to live life in water because of its following special features :

Some of the important terrestrial habitats are :

A waterless area of land covered with sand and having little or no vegetation (plants, etc.) is called a desert.

The desert animals such as desert rats and desert snakes survive by living in burrows during the hot daytime.

Cactus is the most common plant found in deserts. 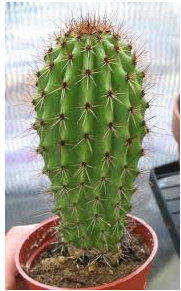 A very high hill is called a mountain. The mountain habitats are usually very cold and windy.

Adaptation in Plants to Mountain Habitats

Adaptation in Animals to Mountain Habitats

Yak is a kind of large ox covered with long silky hair. Yak lives on mountains where it is very cold.

Yaks are adapted to live in the cold climate of the mountains as follows: Yaks have long hair on their body to protect them from cold by keeping them warm. 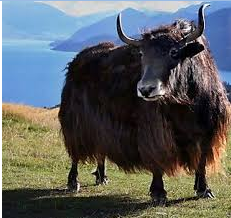 Ca large area of land covered mainly with trees and plants is called a forest. And a large area of grass-covered land used for grazing is called grassland) There are few trees or places for animals to hide

1.    The lion is a strong, fast and agile animal which can hunt and kill its prey like deer.

2.    The lion has long, strong and sharp claws in its front legs to catch its prey.

3.    The lion has eyes in front of its head which enable it to have a correct idea of the location of its prey. This helps it in catching the prey.

4.    The lion is light brown in colour. The light brown colour helps the lion to hide in dry grassland (without being noticed) when it hunts for prey. 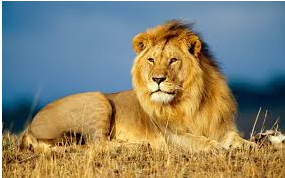 1.    The deer has eyes on the sides of its head which enable it to see in all directions at the same time. The all round vision of deer helps it to see animals like lion (which kill it), in all the area around it.

2.    The deer has big ears for good hearing. The big ears help the deer to hear the movements of predators (like lion) very easily.

3.    The deer is fast and agile animal. The speed of deer helps it to run away from the predators (like lion) which try to catch it.

4.    The deer has brown colour. The brown colour of deer helps it to hide in dry grasslands without being noticed by lion, etc.

5.    The deer has strong teeth for chewing hard plant stems of the forest.

A very large area of sea is called ocean.

Many sea-animals have streamlined bodies to help them move in sea-water easily.

Most of the sea-animals have gills which enable them to use oxygen dissolved in water for breathing. 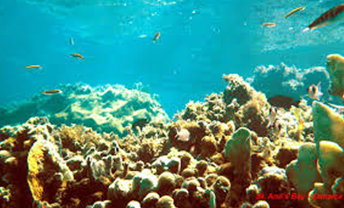 (a) Some aquatic plants float on the surface of water. Example- Water lettuce and water hyacinth 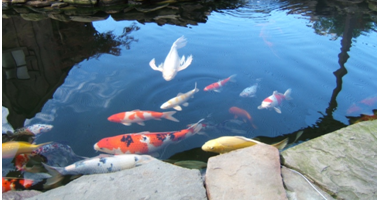 Animals Adapted to Live In Water and on Land

Frogs can live inside water as well as on land near the pond. 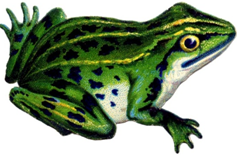