Respiration is the chemical process in which food is taken by an organism combines with oxygen to release energy. All the living things (plants and animals) undergo respiration to obtain energy from food. The process of taking air into the lungs through nose and then expel it through nose is called breathing. The purpose of breathing in air is to provide oxygen to our body for carrying out respiration. Thus, breathing is a part of the process of respiration. 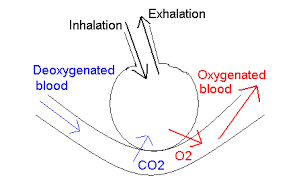 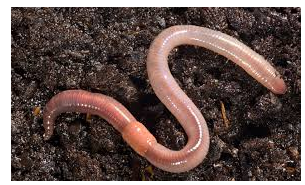 The fish has special organs of breathing called gills. The gills absorb oxygen dissolved in water. 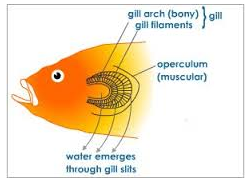 Like animals, plants also need energy. The plants get this energy by the process of respiration. The plants use oxygen (of air) for respiration and release carbon dioxide in this process. Every leaf of a plant has a large number of tiny pores (or holes) called stomata on its surface. The oxygen (of air) enters the plant leaves through stomata and utilized in respiration. The carbon dioxide produced during respiration inside the plant is also expelled from the leaves through stomata. Thus, the exchange of gases (oxygen and carbon dioxide) in plants during respiration takes place through the tiny pores in their leaves called "stomata". Thus, respiration is essential for all living organisms

Some plants store some of their waste products in the body parts (like leaves, bark and fruits) in a way that they do not harm the plant as a whole. The plants get rid of these wastes by the shedding of leaves, peeling of bark and felling of fruits.

Thus, Excretion is another characteristic common to all living things.

Many plants reproduce through seeds. When the seeds are sown in the moist soil, the seeds germinate and grow into new plants.

Some plants reproduce through tubers.  A tuber is a thickened, underground stem (or root) of plant which is swollen with stored food.

Thus, reproduction is essential for the survival of a species on this earth.

Living Things have a Definite Life-Span