Central Theme of This Theory

Theories of Evolution of Class 12

Central theme of this theory :

Due to more use some organs increase in size while those not in use become reduced.

Changes acquired by organism, are inherited in their offsprings and many such changes make them different from their ancestors to be regarded as a new species.

Lamarck cited the examples of present day giraffe and snake.

Ancestors of present day Giraffe were, short grazing animals like common deer. Successive change of grassland into desert forced them to depend on bushes and tall trees. Constant raising of neck and fore limb resulted in their elongation.

Lizard like ancestors of snakes had limbs to pass through narrow passage in thick bushes, their limbs became obstacles hence being not used, it started degenerating and finally disappeared and body became thin and cylindrical.

Examples against the theory:

Muscles of arms and shoulders in blacksmiths, circumcison of foreskin of penis in jews and muslims, piercing of ear-lobe in Indian women, shaving of beard in man for many generations brought no change in their subsequent generations.

Weismann’s (1812 - 56) experiment of cutting tail of mice for many generations came as big blow to Lamarckism.

He later gave “ Theory of continuity of Germplasm ” (1892) stating that every organism consists of two components: (1) Somatoplasm (2) Germplasm

Changes only in the germplasm are inheritable.

It is modified form of Lamarckism to remove its shortcomings. Lamarckism was later supported and redefined by many

Theory of Charles Darwin (1809 – 1882):  about evolution marks the beginning of an era in understanding of evolution. At the age of 22 he lead the expedition tour on H.M.S.Beagle (1831), studied variety of flora and fauna from different parts of globe, but found Galapagos Island most interesting, a “living laboratory of evolution”. Earlier a believer of “theory of special creation”, Darwin propounded Natural Selection as basis of evolution - and all organisms including man have arisen as modified descendants.

He was influenced by the ideas of -

A.R. Wallace (1823-1913) : a contemporary naturalist from Dutch East Indies had made similar studies in Malay Archipelago (Indonesia) and sent his paper - “ Tendency of varieties to depart indefinitely from original type “ to Darwin for comment who had also written a similar article by that time, hence they published (1858) this article jointly as “Origin of Species”

Later with the help of Lyell and Hooker Darwin published (1859) his complete book “Origin of New Species by Natural Selection” : “The Preservation of Races in the Struggle for Life”. 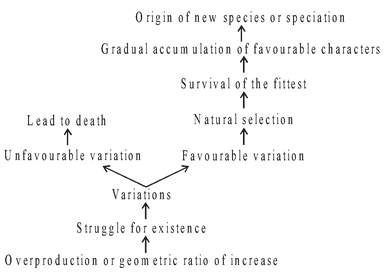