Theories of Evolution of Class 12

(c) Favourable characteristic in a population will accumulate gradually through generation Population become well adapted to their local environments through natural selection. Natural selection is the differential success in reproduction and its product is adaptation of organisms to their environment; it is the result of interaction between environment and the variability.

The weakest point of Darwinism was “all variations are inheritable” as he had no idea of genetics since Mendelism was not propularly known until it was rediscovered by de Vries, Correns and Tschermark (1900)

Only those variations are inheritable which occur at gene (factor by Mendel) level. de Vries said “evolution is possible only through sudden change (mutation)”, Darwin mentioned is as ‘sport’.

To make up the weakness of inheritance Darwin in this theory assumed the existence of Pangenes (or gemmules) as small units (representives) of each part of the body in the blood, come to gonads and get incorporated into the gamete and this way pass to the offsprings. But this theory became irrelevant.

First studied by Fischer & Ford (1845) on pepperd moth (Biston betularia) - of two types : grey moth (B. betularia betularia) and black moth (B. betularia carbonaria); the black moth population in Britain in (1845) was 1% which by 1895 came to 99%, it was thought that due to industrial pollution the grey moth changed into black. When coal run industries were replaced by electric / petroleum run industries the number of grey moths again increased (also correlated as reverse evolution ) as pollution did not eliminate the gene of grey color.

As explained by Neo-Darwinians both populations (grey & black) existed together, the environment favoured the one and disfavoured the other at different times resulting into their changed frequency.

Bernard Kettlewell (1950) tested this by releasing equal numbers of grey and black moths in both polluted (Birmingham) and unpolluted (Dorset) areas. Later he captured 19% grey and 40% black moths from

polluted areas and 12.5% grey and 6% black from unpolluted areas. This indicates the patterns of differential survival of the moths in respective areas.

Penicillin - sensitive & Penicillin - resistant strains of bacteria were isolated. The later population arose by mutation which was preadaptive in nature. New environment only selects such mutation. This is also genetic basis of adaptation.

Homozygous condition is lethal but heterozygous forms had advantage against malaria hence the nature favoured this trait to continue in the population along with the normal trait. G - 6 PD (Glucose-6 phosphate dehydrogenase) deficiency (or Favism) Fava Beans cause premature destruction of RBC, this is advantageous against malaria parasite which cannot complete its schizogony since Hb is denatured and becomes deposited on the RBC membrane.

Occurrence of these plants indicate the particular metal-deposits in that area. 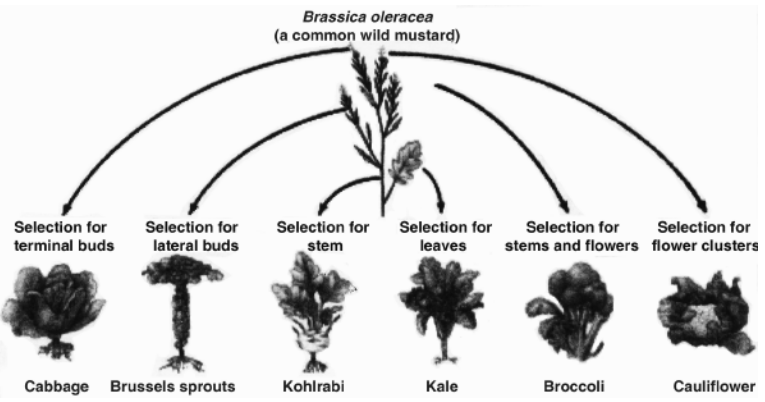 From wild colewort (Brassica oleracea) many varieties like Cabbage, Brussels Sprouts, Kohlrabi, Kale, Broccoli and Cauliflower have been developed.

By hybridization varieties of beans, vegetable (tomato) other crops, animal breeds like mule, hinny, liger, tigon, etc. have been developed.