NCERT Solutions for class-12 Chemistry Chapter 15 Polymers is prepared by our senior and renown teachers of Physics Wallah primary focus while solving these questions of class-12 in NCERT textbook, also do read theory of this Chapter 15 Polymers while going before solving the NCERT questions. Our Physics Wallah team Prepared Other Subjects NCERT Solutions for class 12.

Solution :
Polymers are high molecular mass macromolecules composed of repeating structural units derived from monomers. Polymers have a high molecular mass (103 − 107 u). In a polymer, various monomer units are joined by strong covalent bonds. Polymers can be natural as well as synthetic. Polythene, rubber, and nylon 6, 6 are examples of polymers.

Monomers are simple, reactive molecules that combine with each other in large numbers through covalent bonds to give rise to polymers. For example, ethene, propene, styrene, vinyl chloride.

Question2. What are natural and synthetic polymers? Give two examples of each type.

Solution :
Natural polymers are polymers that are found in nature. They are formed by plants and animals. Examples include protein, cellulose, starch, etc.

Question3. Distinguish between the terms homopolymer and copolymer and give an example of each.

Question4. How do you explain the functionality of a monomer?

Solution :
The functionality of a monomer is the number of binding sites that is/are present in that monomer.

For example, the functionality of monomers such as ethene and propene is one and that of 1, 3-butadiene and adipic acid is two.

Solution :
Polymerization is the process of forming high molecular mass (103 − 107 u) macromolecules, which consist of repeating structural units derived from monomers. In a polymer, various monomer units are joined by strong covalent bonds.

, a homopolymer or copolymer?

is a homopolymer because it is obtained from a single monomer unit, NH2−CHR−COOH.

Question7. In which classes, the polymers are classified on the basis of molecular forces?

Solution :
On the basis of magnitude of intermolecular forces present in polymers, they are classified into the following groups:

Question8. How can you differentiate between addition and condensation polymerisation?

Question9. Explain the term copolymerisation and give two examples. 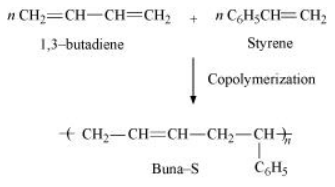 Nylon 6, 6 is also a copolymer formed by hexamethylenediamine and adipic acid.

Question10. Write the free radical mechanism for the polymerisation of ethene.

Solution :
Polymerization of ethene to polythene consists of heating or exposing to light a mixture of ethene with a small amount of benzoyl peroxide as the initiator.

The reaction involved in this process is given below: 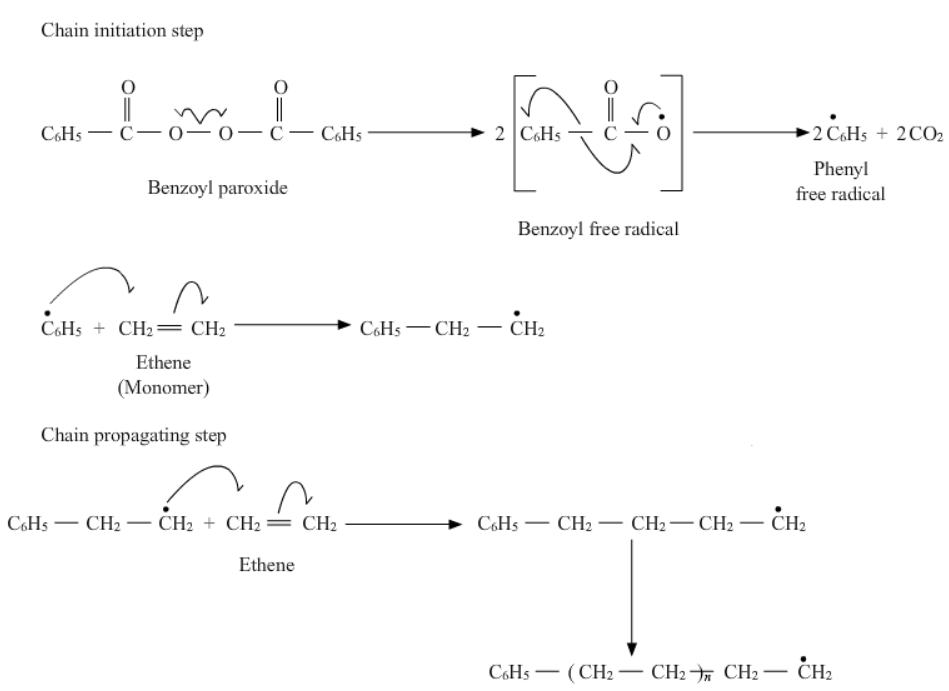 Question11. Define thermoplastics and thermosetting polymers with two examples of each.

Solution :
Thermoplastic polymers are linear (slightly branched) long chain polymers, which can be repeatedly softened and hardened on heating. Hence, they can be modified again and again. Examples include polythene, polystyrene.

Thermosetting polymers are cross-linked or heavily branched polymers which get hardened during the molding process. These plastics cannot be softened again on heating. Examples of thermosetting plastics include bakelite, urea-formaldehyde resins.

Question12. Write the monomers used for getting the following polymers.

Question13. Write the name and structure of one of the common initiators used in free radical addition polymerisation.

Solution :
One common initiator used in free radical addition polymerization is benzoyl peroxide. Its structure is given below.

Question14. How does the presence of double bonds in rubber molecules influence their structure and reactivity?

Solution :
Natural rubber is a linear cis-polyisoprene in which the double bonds are present between C2 and C3 of the isoprene units.

Because of this cis-configuration, intermolecular interactions between the various strands of isoprene are quite weak. As a result, various strands in natural rubber are arranged randomly. Hence, it shows elasticity.

Question15. Discuss the main purpose of vulcanisation of rubber.

Solution :
Natural rubber though useful has some problems associated with its use. These limitations are discussed below:

Vulcanization of natural rubber is done to improve upon all these properties. In this process, a mixture of raw rubber with sulphur and appropriate additive is heated at a temperature range between 373 K and 415 K.

Question16. What are the monomeric repeating units of Nylon-6 and Nylon-6, 6?

Solution :
The monomeric repeating unit of nylon 6 is

, which is derived from Caprolactam.

The monomeric repeating unit of nylon 6, 6 is

, which is derived from hexamethylene diamine and adipic acid.

Question17. Write the names and structures of the monomers of the following polymers:

Question18. Identify the monomer in the following polymeric structures. 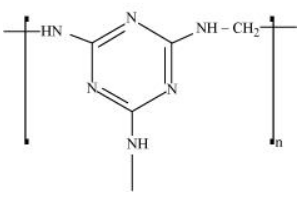 Solution :
(i) The monomers of the given polymeric structure are decanoic acid

(ii) The monomers of the given polymeric structure are 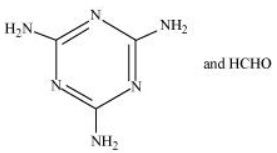 Question19. How is dacron obtained from ethylene glycol and terephthalic acid?

Solution :
The condensation polymerisation of ethylene glycol and terephthalic acid leads to the formation of dacron. 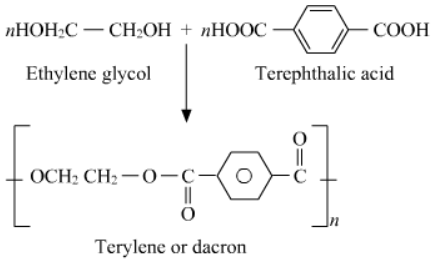 Solution :
A polymer that can be decomposed by bacteria is called a biodegradable polymer.

Question21. What are polymers?

Solution :
Polymers are high molecular mass macromolecules, which consist of repeating structural units derived from monomers. Polymers have a high molecular mass (103 − 107 u). In a polymer, various monomer units are joined by strong covalent bonds. These polymers can be natural as well as synthetic. Polythene, rubber, and nylon 6, 6 are examples of polymers.

Question22. How are polymers classified on the basis of structure?

Solution :
Polymers are classified on the basis of structure as follows:

These polymers are formed of long straight chains. They can be depicted as:

These polymers have many cross-linking bonds that give rise to a network-like structure. These polymers contain bi-functional and tri-functional monomers and strong covalent bonds between various linear polymer chains. Examples of such polymers include bakelite and melmac.

3. Write the names of monomers of the following polymers: 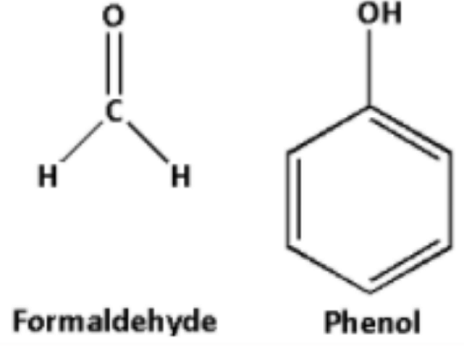 (iii) Polythene is a polymer formed by the polymerization reaction of ethylene molecules.
Thus, the monomer of polythene is ethylene.
The structure of ethylene is as follows: 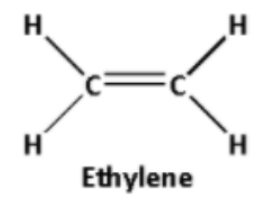 Question25. Explain the difference between Buna-N and Buna-S.

Solution :
Buna − N is a copolymer of 1, 3−butadiene and acrylonitrile.

Buna − S is a copolymer of 1, 3−butadiene and styrene.

Question26. Arrange the following polymers in increasing order of their intermolecular forces.