Co-ordinate is the branch of Mathematics in which geometrical problems are solved through algebra by using a system known as co-ordinate system. In coordinate system, every point in a two dimensional plane can be represented by a unique ordered pair of real numbers.

A pair of real numbers x and y listed in a specific order with ‘x’ at the first place and ‘y’ at the second place is called an ordered pair and written as (x, y). This ordered pair is also known as coordinates of a point in space.

In two dimensional coordinate geometry, we use generally two types of co-ordinate system.

(i) Cartesian or Rectangular co-ordinate system.

In Cartesian co-ordinate system we represent any point by ordered pair (x,y) where x and y are called X and Y co-ordinate of that point respectively.

In polar co-ordinate system we represent any point by ordered pair (r,

) where ‘r’ is called radius vector and

is called vectorial angle of that point. That we will study in higher class.

Draw two straight lines XOX′ and YOY′ intersecting at right angles at the point O. These lines are called coordinate axes or axes of reference. 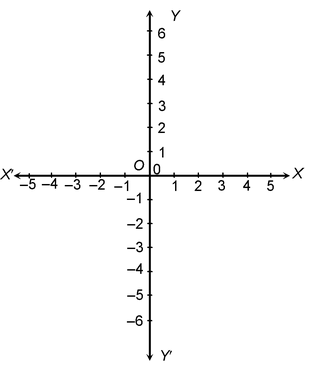 The point O is called the origin.

Any convenient unit of length is selected and mark equal distances on both axes taking the origin as zero.

The coordinate axes XOX′ and YOY′ divide the plane of paper into 4 regions. XOY, YOX′, X′OY′, Y′OX. These four regions are called the first, the second, the third and the fourth quadrant respectively.

The distance measured along x-axis is called x-coordinate or abscissa.

The distance measured along y-axis is called y-coordinate or ordinate. 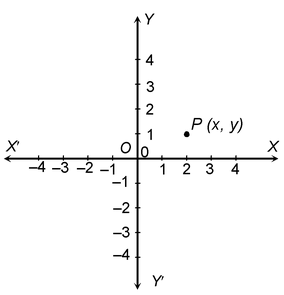 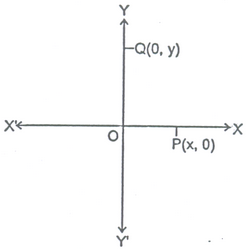 In order to plot the points in a plane, we may use the following algorithm.

Step I: Draw two mutually perpendicular lines on the graph paper, one horizontal and other vertical.

Step III: Choose a suitable scale on X-axis and Y-axis and mark the points on both the axis.

Step IV: Obtain the coordinates of the point which is to be plotted. Let the point be P(a,b). To plot this point start from the origin and |a| units move along OX, OX’ according as ‘a’ is positive or negative respectively. Suppose we arrive at point M. From point M move vertically upward or downward |b| through units according as ‘b’ is positive or negative. The point where we arrive finally is the required point P(a,b). 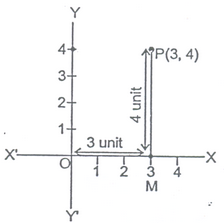 Solution: Let X`IX and Y`OY be the coordinate axis. Here given point is P(3,4), first we move 3 units along OX as 3 is positive then we arrive a point M. Now from M we move vertically upward as 4 is positive. Then we arrive at P(3,4).

2. Write the quadrants for the following points.

Solution: (i) Here both coordinates are positive therefore point A lies in Ist quadrant.

(ii) Here x is negative and y is positive therefore point B lies in IInd quadrant.

3. Plot the following points on the graph paper.

Solution: Let XOX` and YOY`be the coordinate axis. Then the given points may be plotted as given below: 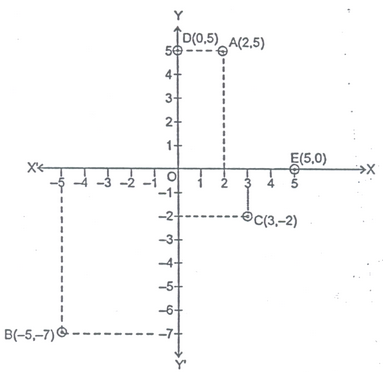