Management And Natural Resource of Class 10

Water is renewable resource. Like air, water is vital to life since for all physiological activities of plants and animals, it is essential. Water is mainly present in two forms :

Keeping in mind importance of agriculture for economy of India, water resources are of great significance.

Water resources can be classified into two types i.e.

Rain water. India gets near about 3 trillion m3 of water from rainfall (or precipitation which amounts for 105-117 cm. annually).In India, intensity of annual rainfall differs in different zones. Following four zones have been identified :

Ground water. Water which percolates into the ground through air spaces of soil.

Zone of Saturation :When porous soil is saturated with water at certain level below soil surface, it is called as zone of saturation.

Water table. The upper level of zone of saturation is called water table.

Ground water is useful in:

India has a very long coast line hence, it has a large source of salt water of seas and oceans.

Oceans can be used in following aspects:

Dams are the large water storing bodies usually built by the government agencies. This stored water is then allowed to flow downstream at the desired rate. 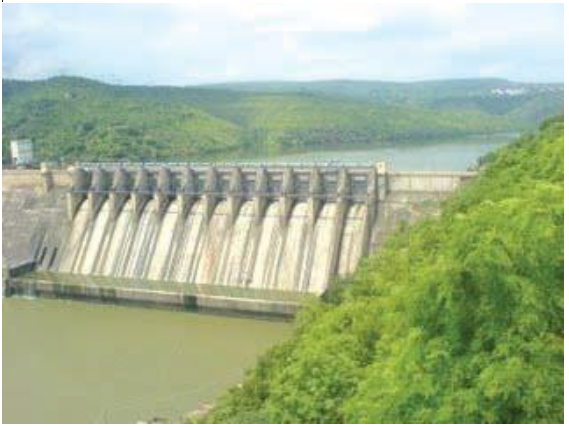 A dam built across a river

Usefulness of dams for the society

The dams are useful to the society in the following ways :

(a) Water stored in a dam is used for irrigation through a network of canals. It ensures round the year water supply to the crop fields and help raise agricultural production. For example, the Indira Gandhi canal has brought greenery to considerable area of Rajasthan.

(b) Dams ensure continuous water supply to the people in towns and cities through pipelines after suitable treatment.

(c) The falling of water from the dam is used for generating electricity. The electricity thus produced is called hydro electricity.Purposes for building a dam :

(i) Mismanagement of the water has largely led to the benefits being cornered by a few people. There is no equitable distribution of water, thus people close to the source grow water intensive crops like sugarcane and rice while people farther downstream do not get any water.

(ii) A large number of human settlements are submerged in the water of large reservoir formed by the dam and many people are rendered homeless. It is therefore necessary that these people are given adequate compensation by the government for rehabilitation so as to start their life afresh.

(i) The construction of dams on the rivers has contributed to deforestation and loss of biodiversity.

(ii) A large variety of flora and fauna get submerged in the water of large reservoir formed by the dam which disturbs the ecological balance.

MANAGEMENT AND CONSERVATION OF WATER RESOURCES

(i) Integrated water-shed plan for drinking, irrigation and industrial uses.

(iii) Transfer of surplus water to water deficit basins by inter-linking of rivers.

(vii)Dams: They are massive barriers built across rivers and streams to confine and utilize the flow of water for human purposes such as irrigation and generation of electricity.

Due to mismanagement in distribution of water, the benefit of constructing a dam goes to few people only. For example, people close to the water source grow water intensive crop like sugarcane and rice while people farther downstream do not get any water. This resulted in discontentment among the people who have been displaced by building of dam.

(i) Watershed management : It means scientific conservation of soil and water to increase the biomass production.

(ii) Water harvesting : It means capturing rainwater where it falls or capturing the runoff water in a local area and taking measures to keep the water clean by not allowing polluting activities to take place.

Water harvesting techniques are mainly location specific. It is an age - old concept in India.

Some of the water harvesting techniques are: