Management And Natural Resource of Class 10

It means all those naturally occurring animals, plants and their species which are not cultivated, domesticated and tamed.

It is the sensible use of the earth's natural resources in order to avoid excessive degradation and betterment of the environment. It includes - the search for alternative food and fuel supplies these are endangered, an awareness of the dangers of pollution and the maintenance conservation of habitats and its biodiversity.

Steps for conservation of Wildlife:

(A) Laws should be imposed to ban poaching or capturing of any animal or bird belonging to an endangered species.

(B) The natural habitats of wild animals and birds should be preserved by National Parks, Sanctuaries and Biosphere reserves throughout the country.

(D) More attention should be given to conserve the endangered species of wild animals and birds to prevent their extinction.

(E) Unauthorized cutting of forest trees should be stopped.

The conservation of forests depends on its forest resources or its various stakeholders, who are as follows:

(a) People Who Live in or Around Forests :

(i) They depend on forest produce, for various aspects of their life.

(iii) Bamboo is used to make slats for huts and baskets for collecting and storing food.

(iv) Implements for agriculture, fishing and hunting are largely made of wood.

Forest Department of the Government :

(i) Which owns the land and controls the forest resources?

(ii) People develop practices to ensure that forest resources are used in a sustainable manner.

(iii) The forest resources were overexploited after the British took control of the forest.

(iv) Forest department of independent India then owned the land and control the resources of the forest but local needs such as herbs, fruits and fodder were ignored.

(v) Monoculture of pine, teak or eucalyptus have been started which can destroy the bio-diversity of the area.

(i) Industries consider the forest as a source of raw material for its factories.

(ii) These industries are not interested for the sustainability of the forest in one area as they go to a different area after cutting down all trees in one area.

TRADITIONAL USE OF FOREST:

Causes of Damages to Forests :

(i) Local people damage forests to fulfil their daily needs.

(iv) By tourists or in making arrangements for tourists.

Acomprehensive World Conservation Strategy for the judicious use of natural resources has been formulated by the scientists from 100 countries of the world.

Some of the proposed steps to protect the wild life are:

ROLE OF LOCAL PEOPLE IN MANAGEMENT OF FOREST:

Management of protected areas by keeping local people away cannot possibly be successful in the long run.

Studies have shown that the prejudice against the traditional use of forest areas has no basis. Here is an example – The Great Himalayan National park contains, within its reserved area, alpine meadows which were grazed by sheep in summer. Nomadic shepherds drove their flock up from the valleys every summer. When this national park was formed, this practice was put to an end. Now it is seen that, without the regular grazing by sheep the grass first grows very tall, and then falls over, preventing fresh growth.

Let us study some instances where ordinary people have played a great role in the conservation of forests.

The case of Khejri tree:

TheChipko movementorChipkoAndolanis a movement that practised theGandhianmethods ofsatyagrahaandnon-violentresistance, through the act of hugging trees to protect them from being felled. The modern Chipko movement started in the early 1970s in theGarhwalHimalayasofUttarakhand,Then InUttar Pradeshwith growing awareness towards rapid deforestation. The landmark event in this struggle took place on March 26, 1974, when a group of peasant women in Reni village, Hemwalghati, InChamoli district,Uttarakhand, India, acted to prevent the cutting of trees and reclaim their traditional forest rights that were threatened by the contractor system of the state Forest Department. Their actions inspired hundreds of such actions at the grassroots level throughout the region. By the 1980s the movement had spread throughout India and led to formulation of people-sensitive forest policies, which put a stop to the open felling of trees in regions as far reaching as Vindhyas and theWestern Ghats.

The first recorded event ofChipkohowever, took place in villageKhejarli,Jodhpur district, in 1731, When 363Bishnois, led by Amrita Devi while protecting greenKhejritrees, considered sacred by the community, by hugging them, and braved the axes of loggers sent by the local ruler.Today, it is seen as an inspiration and a precursor for Chipko movement of Garhwal. 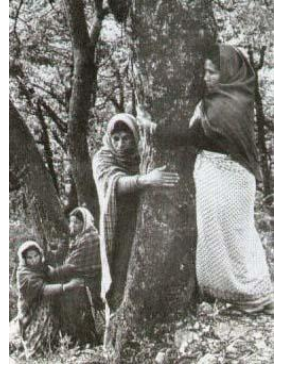 In 1972, The West Bengal forest department formulated a novel scheme to revive the degraded sal forests by involving the local people. It was started in the Arabari forest range of midnapore district. A.K. Banerjee, the remove forest officer involved the villagers of the area around the forest in the protection of 1272 hectares of badly degraded sal forest. In return, the villagers were given employment in both silviculture (a programme to replenish the forest by growing more trees and plants) and harvesting operations of the forest. 25% of the final harvest produce were given and they were allowed to collect firewood and fodder from the forest on a nominal payment. With this participation of the local people, the degraded sal forest of Arabari became green within ten years.