Reproduction In Flowering Plants of Class 12

Artificial methods are man-made techniques to propagate desired varieties according to human requirements.

Cuttings. They are small broken parts of stem, root and leaves which are used for propagation.

Soil Layering. A soft basal branch is defoliated in the middle where a small injury or cut is also given. Later on as the roots develop the branch or layer is separated and planted. Soil layering is of following types 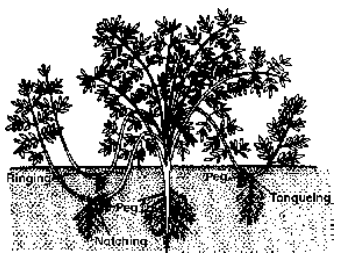 Air Layering (Gootee) A ring of bark is removed from an aerial shoot. It is covered by grafting clay, hormone, moss, dung and water. It is then wrapped in polythene. After 1—3 months, roots appear and shoot is removed to be used for planting, e.g., Litchi, Pomegranate, China Rose. 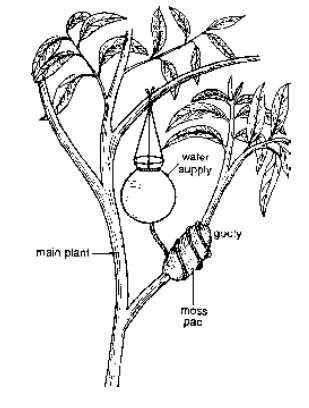 Grafting Parts of two different plants are joined to form a composite plant. Plant with root system is called stock while with shoot is scion or graft. 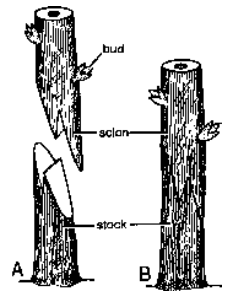 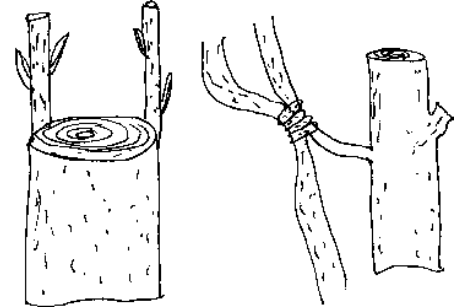 Bud Grafting Scion is a bud with a small piece of bark and cambium. Stock is given a cut to expose the cambium. Bud graft is inserted in the stock. Both are sealed as well as bandaged, e.g., Apple, Peach, Rose. 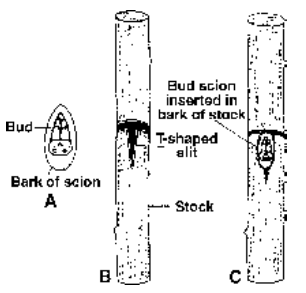 Micrografting Virus free shoot apex is grafted over the young seedling in a culture medium.e.g., Citrus, Potato, Sugarcane, Tapioca. Micropropagation is the rapid raising of new plants from small plant tissues with the help of tissue culture technique. Tissue culture technique was first thought by Haberlandt (1902) and Hanning (1904). The first successful culture experiment was carried out by White (1932). Three workers (White, Nobecourt and Gautheret) independently perfected the techinque of tissue culture. They were able to develop callus. Later, workers found the method to bring about differentiation of callus (Skoog and Miller, 1957) development of somatic embryos or embryoids (Steward, 1963); Helperin and Wetherell (1964). Guha and Maheshwari (1966) developed haploid or pollen cluture technique for obtaining haploid embryoids and perfectly homozygous plants. The technique was perfected by Carlson et al (1972). The plant part used in tissue culture is called explant. Tissue culture as applied to higher plants has three basic requirements – proper nutrient medium, aseptic conditions and aeration. 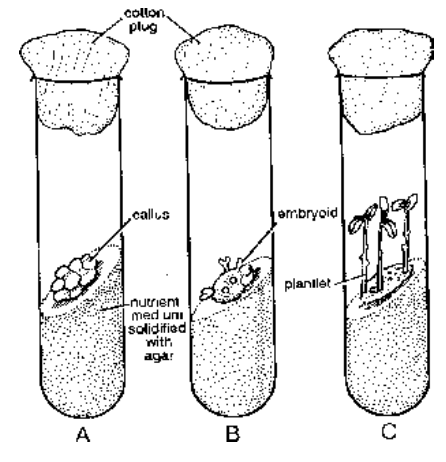 Totipotency or cellular totipotency is the ability of a somatic cell to form the complete organism. Theoretically, all somatic cells should be totipotent since they carry the full gene complement of the individual. However, during their maturation the cells undergo differentiation and are unable to return to their undifferentiated status except under special circumstances. The phenomenon of conversion of a mature, permanent and differentiated cell into meristematic state is called dedifferentiation. The dedifferentiated cells can undergo division and ultimately form the whole individual or a part of it. Totipotency can be easily demonstrated in plant cells.

Cellular totipotency was first proved by Steward and his coworkers around 1957. They sliced Carrot root andtook small pieces of tissues from the phloem region.

Muir et al (1958) subjected tobacco callus to shaking in a liquid medium till single cells separated. Single cells were picked up through micropipette and placed individually on a small piece of wet filter paper kept over a callus growing ona semisolid culture medium. Callus is believed to function as nurse tissue and provide the single cell with factors required for growth. The single cell grows and divides to form a cellular clump. The latter is transferred to a new medium where it forms plant. This is called single cell culture or Nurse tissue technique.

The method is employed for obtaining pathogen free clones (e.g. Potato, Strawberry, Carnation, Garlic) or multiply those plants which show slow vegetative propagation, e.g. Orchids, Pineapple. The apical meristem with one or two young leaves is cut from the shoot tip and culture medium which helps in the development of roots. Soon after appearance of root, the plant is transferred to a new medium.

The technique is used in rapid multiplication of pathogen free rare plants, rare hybrids, sterile plants, multiple copies of one sex. A shoot tip or apical bud with 1–4 leaf primordia is taken, sterilized and placed on a culture medium having high salt content (e.g. Murashige and Skoog medium) and NAA (e.g, 2ppm).It is given cuts or shaken to form more buds. Subculturing is done every 4-6 weeks. Through subculturing the process of multiplication of shoot tips or buds can be maintained indefinitely. When plants are required, the shoot tips are shifted to low salt medium without NAA (Naphthalene Acetic Acid). Sometimes rooting hormones are added to hasten root formation. Multiple shootlet production can be performed profitably in case of carnation, Gladiolus, Gloxinia, Chrysanthemum,Gerberas, Begonia, Banana, Cardamom, Potato, Orchids etc.

Somatic embryos or embryoids are nonzygotic embryo like structures that develop in vitro cultures from somatic cells of callus raised from an embryo (Steward, 1963; Helperin and Wetherell. 1964). The separated cells of such a callus first form a mass of cells that pass through globular, heart shaped and torpedo like stages similar to the ones found during normal development of normal or zygotic embryos. Embryoids can be produced in culture from somatic cells of any type of tissue but it is easier to raise them from culture of immature embryos. The medium having ammonium nitrogen and little auxin favours their differentiation.

Pure lines are obtained through a long laborious process involving inbreeding for several generations. They are maintained permanently for requirement of cross breeding. Mutations introduced in pure lines do not express themselves easily. Haploid plants are always pure because they have only one gene for each trait. All mutations express their effect in haploids. Guha and Maheshwari (1966) reported culture of androgenic haploids of Datura innoxia. Androgenic haploids have been studied in over 250 plant species including Wheat, Rice, Maize, Rubber, Tomato, Asparagus etc. In haploids all mutations show their effect. Therefore, they are useful for induction of mutations and mutation breeding. Colchicine treatment produces pure and perfect homozygous plants in one step which takes several years for other plants. Chinese workers have claimed the development of new varieties of several plants through hybrid culture. Winter Wheat Jinghua-1 and Rice Guan-18 are already under cultivation in that country.

Embryo Rescue Some rare plants reproduce through seeds with great difficulty (e.g., Makapuno nut). Interspecific hybridisation often fails because the embryo dies quite early or fails to reach maturity. In such cases the embryo is taken out of the fertilized ovule and cultured over nutrient medium under controlled conditions. Jute species, Corchorus olitorius and C.capsularis for better quality of fibre and resistance of pests as well as pathogens. Resistance to brown plant hopper found in Oryza officinalis has been transferred to Oryza sativa through hybridisation followed by embryo rescue (Khush and Jena, 1986). Disease resistance and other qualities of Wild Bean (Phaseolus angustissimus) have been transferred to common bean (Phaseolus vulgaris) though interspecific hybridisation and embryo rescue technique. Characteristics of improved vitamin C content, resistance to pathogens and pests have been successfully transferred from wild Lycopersicon peruvianum to cultivated Tomato, Lycopersicon lycopersicum, through hybridisation followed by embryo rescue.

Plant cells of different varieties, species or even genera can be made to fuse to produce somatic hybrids. The naked protoplasts of the two plants are brought in contact and made to fuse by means of electrofusion or chemical like poly ethylene glycol (PEG) and sodium nitrate. The fusion of protoplasts not only involves the fusion of their cytoplasm but also their nuclei. The fused protoplasts are allowed to grow on culture medium. Soon they develop their own walls when they are called somatic hybrid cells. The hybrid cells give rise to callus. Callus later differentiates into new plant which is somatic hybrid between two plants. Somatic hybrids in plants were first obtained between two species of Tobacco (Nicotiana glauca and N.langsdorfit) by Carlson et al in 1972. The process of sexual reproduction and the related events in the life history of an organism are studied under the branch called embryology. The credit for laying the foundation of plant embryology in India goes to late Professor Panchanan Maheswari of Delhi University.

The major events occurring during the sexual reproduction in an Angiospermic plants are as follows :

A mature anther is made of the wall and the pollen chamber. 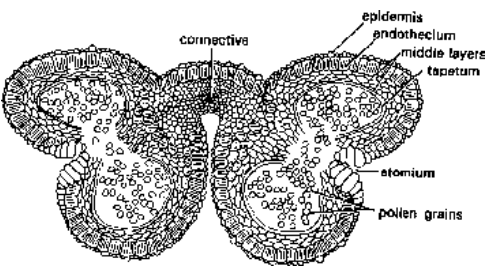 Tapetum is of two types :

Providing nourishment to sporogenous cell, microspore mother cell and pollens. Secretion of enzymes, hormones (IAA) and formation of pollen kitt on the entomophilous pollen grain. Secretion of specific proteins for the pollen which are meant for compatibility. It provides Ubisch bodies which are coated with sporopollenin and they help in formation of exine of the pollen grain.

This forms the central cavity of the anther lobe. The process of microsporogenesis takes place in this region.

The young anther is represented by only a group of parenchymatous cells surrounded by epidermis. It soon becomes four lobed. In each of the four lobes,some of the hypodermal cells begin to act at archesporial initials. Each archesporial initial divides into an outer primary parietal cell and an inner primary sporogenous cell. The primary parietal cell divides to form 3-5 wall layers, i.e. endothecium, middle layers and tapetum. The primary sporogenous cells divide to produce a mass of sporogenous cellsor microsporocytes.The sporogenous cells undergo a few mitotic divisions simultaneously with the growth of anther. These derivatives function as microspore mother cells.