Some natural phenomenon of Class 8

We know that sometimes during rain, thunder and lightning also takes place. During rain over the sky flashes of light are also observe. This natural phenomenon is called lightning. During lightning strike, ten to twenty thousand amperes of electric current flows. The air in the path of lightning heats up and gets hotter than the surface of the sun (about 30,000°C). This causes the flash of lightning

The thunder that we hear during rain is due to the wave of vibrations (shock wave) which occur due to enormous amount of heat produced and make the air expand suddenly.

Therefore, a lightning is a high-energy electric discharge accompanied by a large amount of heat and light. This can happen between a charged cloud and the ground, between two charged clouds or even between two oppositely charged portions of the same cloud.

Thunderstorms often occur at the end of hot, sticky summer days. At this time, warm moist air rises quickly and forms large cumulonimbus clouds. Inside these tall dark clouds, air currents create strong up draughts and water droplets and ice particles rub against each other. As they bang together like this, it causes a build-up of static electricity. Lighter, positive charges gather at the top of the cloud and heavier, negatively-charged pieces of ice and water accumulate at the base. The ground below is also positively charged. Electricity flows between the charges and the difference between them increases. When the differences get big enough, they are neutralized and electricity is released as a flash of lightning.

The sky is filled with electric charge. In a calm sky, the positive (+) and negative (-) charges are evenly spaced throughout the atmosphere. Therefore, a calm sky has a neutral charge. 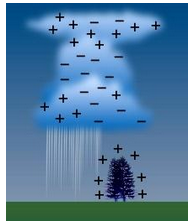 Lightning can take place in several different areas of a thunderstorm. Most lightning (about 80%) occurs within a single cloud and is called cloud-to-cloud lightning. Most of the other 20% of lightning involves a stroke from the cloud to the ground. Damage is usually caused where the lightning strikes the ground. And sometimes lightning can jump from one cloud to another or to the surrounding air.

Most of the lightning we see appears as a single line of bright white light, called streak lightning. However, several other types of lightning can occur.

Ribbon lightning occurs in thunderstorms with high cross winds and multiple strokes of lightning. Winds separate the strokes of the lightning bold, making it look like there are parallel streaks of light. This is a form of cloud-to-ground lightning.

Bead lightning is a relatively rare form of lightning. In bead lightning, the stroke appears to break up into a string of short, bright sections, and looks like a string of beads. This is a form of cloud-to-ground lightning.

Heat lightning occurs within a cloud, but the observer is too far away from the storm for its thunder to be heard. The sound waves dissipate before reaching the observer. Instead of individual strokes, heat lightning often lights up the entire cloud. This is a form of cloud-to-cloud lightning. 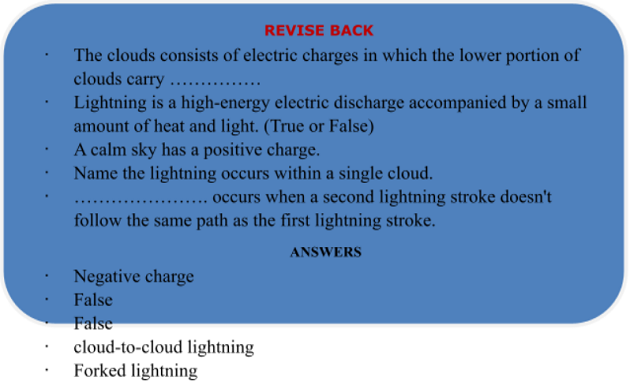