Pair Of Linear Equations In Two Variables of Class 10

1. The equation of the form ax = b or ax + b = 0, where a and b are two real numbers such that x ≠ 0 and x is a variable is called a inear equation in one variable.

3. The graph of a linear equation in two variables is a straight line.

4. The graph of a linear equation in one variable is a straight line parallel to x-axis for ay = b and parallel to y-axis for ax = b, where a ≠ 0.

6. The value of the variable x and y satisfying each one of the equations in a given system of linear equations in x and y simultaneously is called a solution of the system.

For solving such equations we have three methods.

(i) Elimination by substitution

(ii) Elimination by equating the coefficients

(Find the value of any one variable in terms of other and then use it to find other variable from the second equation): Substitute the value of x in equation (ii)

ELIMINATION BY EQUATING THE COEFFICIENTS:

(Eliminating One variable by making the coefficient equal to get the value of one variable and then put it in any equation to find other variable): From equation (iii) and (iv), we have

Putting value of y in equation (iv), we have

To obtain the values of x and y, we follow these steps:

We can write the solution given by equations (v) and (vi) in the following form:

In remembering the above result, the following diagram may be helpful:

For solving a pair of linear equations by this method, we will follow the following steps:

2. Taking the help of the diagram above, write equations as given in (viii).

question 1. Solve the following system of equations in x and y

Hence, the given system of the equation has unique solution.

By cross multiplication, we have 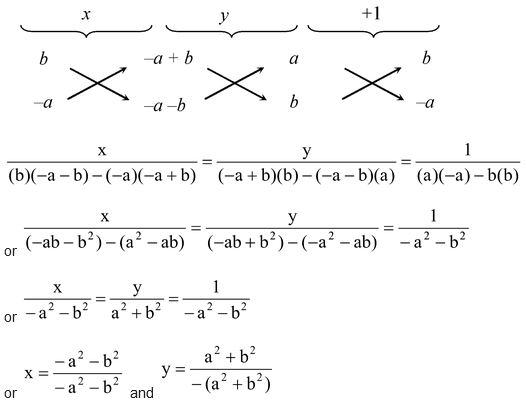 question 2. Solve for x and y.

Hence, the given system of equation has unique solution.

By cross multiplication, we have 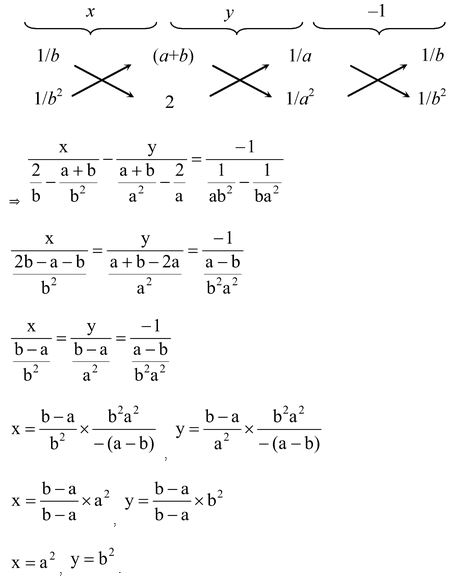 Hence, the given system of equation has a unique solution. By cross multiplication, we have 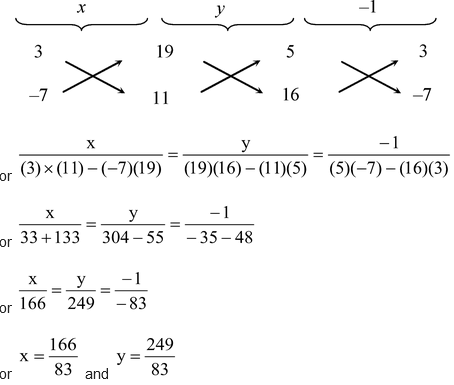