Laws Of Motion of Class 11

When there is no net force on an object

−an object at rest remains at rest, and

−an object in motion continues to move with a velocity

that is constant in magnitude and direction.

Newton’s second law states the relation between the net force and the inertial mass.

A horse refuses to pull a cart. The horse reasons, “according to Newton’s third law, whatever force I exert on the cart, the cart will exert an equal and opposite force on me so the resultant force will be zero and I will have no chance of accelerating the cart.” What is wrong with this reasoning ?

Figure is a sketch of a horse pulling the cart. Since we are interested in the motion of the cart, we have circled it and indicated the forces acting on it. The force exerted by the horse is labelled T. Other forces on the cart are its weight W, the vertical support force of ground N, and the horizontal force exerted by the ground labeled f (for friction). The vertical forces W and N balance each other. The horizontal forces are T to the right and f to the left. The cart will accelerate if T is greater than f. T′ is the reaction force exerted on the horse, not the cart. It has no effect on the motion of the cart. It does effect the motion of the horse. If the horse is to accelerate to the right, there must be a force F (to the right) exerted by the ground on the horse’s feet that is greater than T′ . This example illustrates the importance of a simple diagram (free body diagram) in solving mechanics problems. Had the horse drawn a simple diagram, he would have seen that he need only push back hard against the ground so that the ground would push him forward.

(a)Find the acceleration of each block.

Since the blocks cannot move normal to the surface, therefore. a1y = 0 and a2y = 0. This is called the constraint relation.

Using ΣFx = max for each block, we get

In this situation, applying Newton’s Second law along the x−axis, we get

Here we have not considered the normal reaction between the blocks − being an internal force it can not accelerate the system (according to Newton’s Third Law).

(b)Substituting the value of ‘a’ in equation (ii) we get

The free body diagram of each block is shown in the figure. 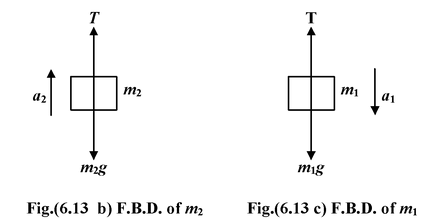 Number of equations : only two

How to determine Constraint Relation ?

For example, in the chosen problem, the length of string remains constant is the constraint or restriction.

Differentiating both the sides w.r.t. time, we get

Each term on the left side represents velocity of the block.

Since we have to find a relation between accelerations, therefore, we differentiate it once again w.r.t. time.

Alternatively, one can also assume the distance of each block from the ground as shown in the figure.

One can easily see that an expression for length of the string can not be written unless we locate the centre of the pulley w.r.t. ground. 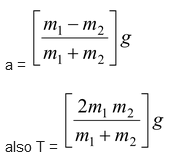 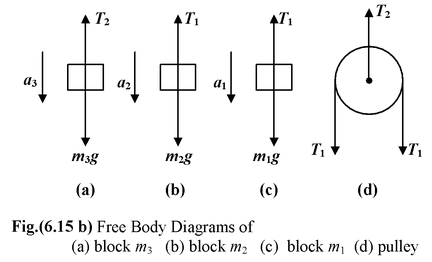 After solving equations (i) to (v), we get 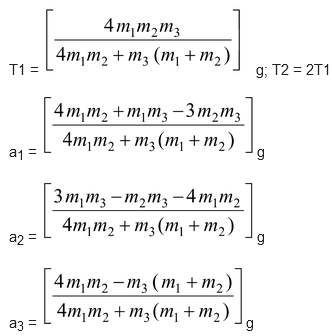 Thus, the applied force is

(c)When the painter and the platform moves (upward) together with a constant speed, it is in a state of dynamic equilibrium.