Total hearing impairment, which is rare, is usually from birth itself. Partial disability is generally the result of a disease, injury or age. Children with impaired hearing need special care. By learning sign language, such children can communicate effectively because speech develops as the direct result of hearing, a child with a hearing loss may have defective speech also. Technological devices for the hearing impaired have made it possible for such persons to improve their quality of life. Society can do much to improve the living environment for the hearing-impaired and help them live normal lives.

MEASURE OF INTENSITY OF SOUND (INTENSITY LEVEL OR SOUND LEVEL) :

It is measured in decibels (dB). It signifies the sound pressure level, Human ear can pick up sound from 10 dB to 180 dB. The loudness of sound is considered normal if it is between 50 dB to 60 dB. A normal human being can tolerate loudness of 80 dB above which is painful and causes various health problems.

What a human perceives as loud or soft depends on the frequency as well as the intensity of the sound. The graph below displays intensity levels compared with the frequencies for sounds of equal loudness for humans. The bottom line is the threshold of hearing. At a 1 kHz frequency, the hearing threshold is 0 dB, but at 60 Hz the decibel level is 50. Only one percent of all human beings can hear sounds this low, so, the lower line is mainly for those with very good hearing. The next lineup is the hearing threshold for the majority of people. The top line is the pain threshold. Other than at one point, about 4 kHz, this line varies little. All of the other lines also dip down at 4 kHz. We can gather from this graph, then, that the human ear is most sensitive at about 4 kHz. 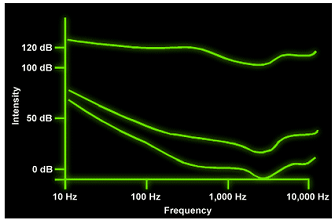 When a vehicle travels faster than the speed of sound, about 330 meters per second, a sonic boom can be heard. As the vehicle overtakes its own sound, the sound waves spread out behind in a shockwave, or sonic boom.