Impulse is the product of the force and the time during which the force acts. If the force is variable, then⇒ The area under F-t graph gives impulse

Momentum:  Momentum is directly proportional to the object's mass (m) and velocity (v) The SI unit for momentum is kg m/s. Momentum is so important for understanding motion that it was called the quantity of motion by physicists such as Newton

2. Principle Of Conservation Of Momentum:

The total momentum of a system of particles is a constant in the absence of external forces.

Derivation of Conservation of Momentum

The efficient of restitution,The Coefficient of Restitution (e) is a variable number with no units, with limits from zero to one.

'e' is a consequence of Newton's Experimental Law of Impact, which describes how the speed of separation of two impacting bodies compares with their speed of approach.

note: the speeds are relative speeds

If we consider the speed of individual masses before and after collision, we obtain another useful equation:

uA = initial speed of mass A

uB = initial speed of mass B

vA = final speed of mass A

vB = final speed of mass B

relative initial speed of mass A to mass B = uB - uA

relative final speed of mass A to mass B = vB - vA

note: in this equation the absolute of uB - uA and vB - vA are used ( |absolute| so there is no net negative result )

Elastic collision in one dimension

If the two bodies after collision move in a straight line, the collision is said to be of one dimension.

From the law of conservation of linear momentum,

After head on elastic collision, the velocities of the colliding bodies

Force due to a jet of water on a wall = u2 Ad, where u is the velocity of the jet, A is the area of cross-section of jet and d is the density of the fluid
In the absence of external forces, the centre of mass of a system has a constant velocity.

Let us consider a simple situation in which the inelastic head on collision between two bodies of masses mA and mB takes place. Let the colliding bodies be initially move with velocities u1 and u2. After collision both bodies stick together and moves with common velocity v.

Total momentum of the system before collision = mAu1 + mBu2

Total momentum of the system after collision =

mass of the composite body ? common velocity = (mA+ mB ) v By law of conservation of momentum

Thus, knowing the masses of the two bodies and their velocities before collision, the common velocity of the system after collision can be calculated.

If the second particle is initially at rest i.e. u2 = 0 then 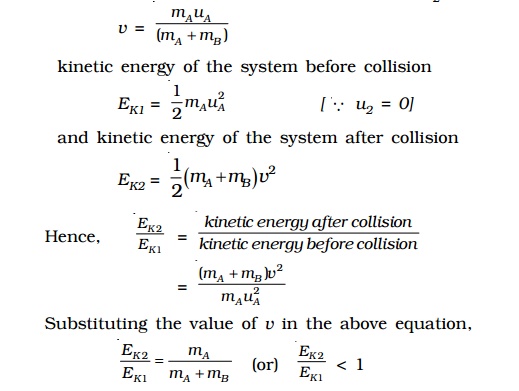 kinetic energy of the system before collision

and kinetic energy of the system after collision

Substituting the value of v in the above equation,

The momentum is defined as the product of mass and the velocity. The linear conservation of momentum says that the total momentum of the system is always constant. The impulse is defined as the rate of change of momentum with respect to time. Formula used:The formula of the momentum is given by, Where mass is m and velocity is v. Formula of the force is given by, Where mass is mass and acceleration is a.