Centre Of Mass Of System Of Particles

In other words, a particle’s centre of mass is the point where Newton’s law of motions applies perfectly. When force is applied to the centre of mass, the object as a system of particles moves in the direction of force without rotating. No matter what the shape of the object, the centre of mass helps understand the mechanism of force and motion of that object.

Angular momentum is basically the product of the moment of inertia of an object and its angular velocity. Furthermore, both the quantities must be about the equal and the same axis i.e. the rotation line.

A simple way to calculate the magnitude of the torque is to first determine the lever arm and then multiply it times the applied force.

Now, from the above observation, we conclude that torque produced depends on the magnitude of the force and the perpendicular distance between the point about which torque is calculated and the point of application of force. So, mathematically torque is represented as:

The unit of torque is Newton–meter (N-m). The above equation can be represented as the vector product of force and position vector. 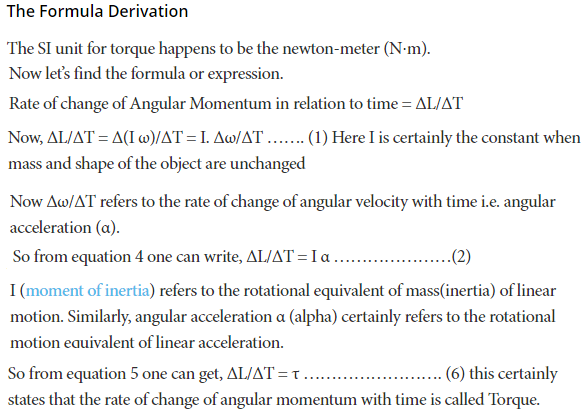 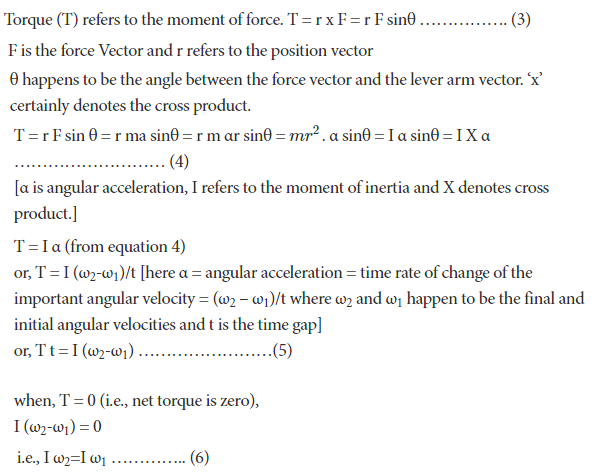 Moment of inertia is defined as the quantity expressed by the body resisting angular acceleration which is the sum of the product of the mass of every particle with its square of a distance from the axis of rotation. Or in more simple terms, it can be described as a quantity that decides the amount of torque needed for a specific angular acceleration in a rotational axis. Moment of Inertia is also known as the angular mass or rotational inertia. The SI unit of moment of inertia is kg m2. 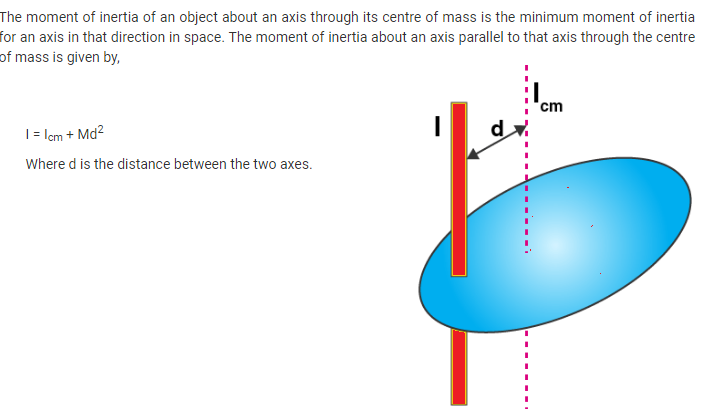 According to the above definition of Perpendicular axis theorem can be written as,

The formula of moment inertia in terms of the radius of gyration is given as follows:

Accordingly, the radius of gyration is given as follows

Consider a body having n number of particles each having a mass of m. Let the perpendicular distance from the axis of rotation be given by r1, r2, r3,…,rn. We know that the moment of inertia in terms of radius of gyration is given by the equation (1). Substituting the values in the equation, we get the moment od inertia of the body as follows

We can write mn as M which signifies the total mass of the body. Now the equation becomes

From the above equation, we can infer that the radius of gyration can also be defined as the root-mean-square distance of various particles of the body from the axis of rotation.

(a) Work done by torque:

For an angular motion

the work done can be expressed as

(b) Power developed by torque

(c) Kinetic energy of rotation Things that roll without slipping have some fraction of their energy as translational kinetic and the remainder as rotational kinetic. The ratio depends on the moment of inertia of the object that’s rolling.

where ωω is the angular velocity and II is the moment of inertia around the axis of rotation.

The mechanical work applied during rotation is the torque (ττ) times the rotation angle (θθ): W=τθ.

The instantaneous power of an angularly accelerating body is the torque times the angular velocity: P=τω.

Note the close relationship between the result for rotational energy and the energy held by linear (or translational) motion:

(a) In pure rolling (i.e. without slipping):Rolling is a type of motion that combines rotation and translation of that object with respect to a surface, such that, if ideal conditions exist, the two are in contact with each other without sliding. Rolling where there is no sliding is referred to as pure rolling. 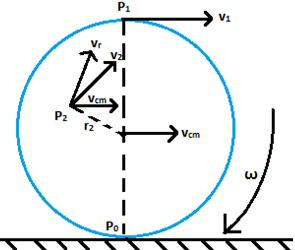 vr are opposite in direction. If we want the object to roll without slipping, the point which is in contact with the ground should be at rest. So vr = vcm

where R = radius of body, K = radius of gyration
⇒ Different bodies of same radius such as ring, hollow sphere, solid sphere and cylinder will acquire different accelerations (as they have different K values) and hence take different time to reach the bottom of the plane.