Some Definition Distance: Distance between two points is the length of actual path travelled by the particle. It is a scalar quantity.
Unit : m(metre)
Displacement: Displacement is a vector  drawn from the initial position (A) to the final position (B)
Unit :  m(metre)

Velocity: Velocity is the rate of change of position vector.


Acceleration: Acceleration is the rate of change of velocity.
Unit : ms–2 (metre per second2)


v-t Curve: The area under the v-t curve measures the change in position x.

In the above graph, 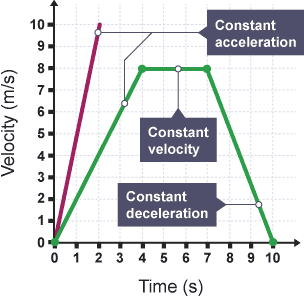 Subtraction of vectors:The process of subtracting one vector from another is equivalent to adding, vectorially, the negative of the vector to be subtracted. Suppose there are two vectors  and , shown in figure (A) and we have to subtract and . It is just the same thing as adding vectors – to . The resultant is shown in figure (B). 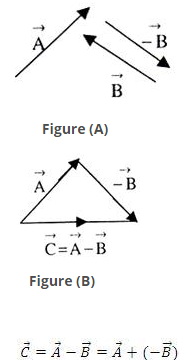 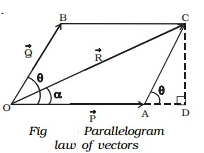 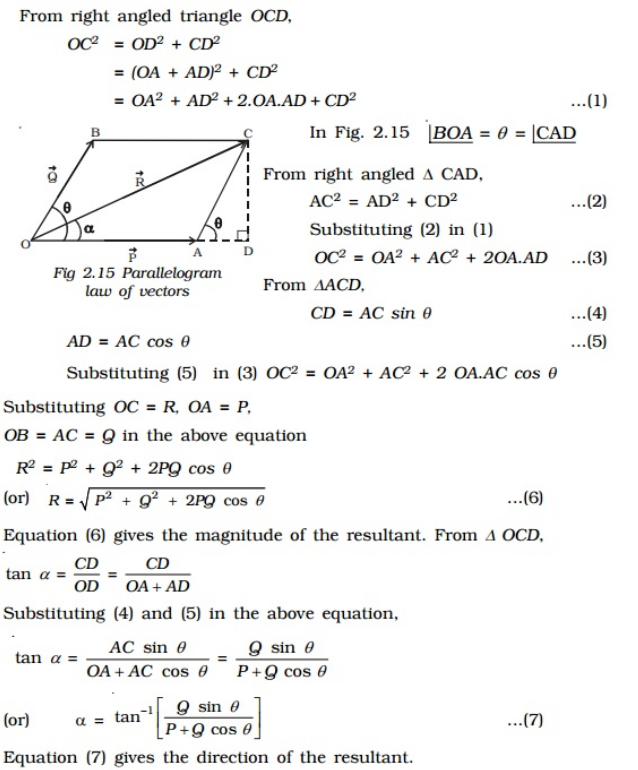 
Relative Velocity: Relative velocity is used to denote the aircraft moving in the wind or boats moving through the water, etc. The velocity is measured within the object according to the observer. It can be measured using the use of an intermediate reference frame. In simpler terms, this can be the vector sum of the velocities. The relative velocity formula is expressed as


Resolution of vectors: The component of F in a direction making an angle θ is F cos θ.
The other component of F at right angles to F cos θ is F sin θ.

A vector directed at an angle with the co-ordinate axis, can be resolved into its components along the axes. This process of splitting a vector into its components is known as resolution of a vector.
Consider a vector R = Vector( OA) making an angle θ with X - axis. The vector R can be resolved into two components along X - axis and Y-axis respectively. Draw two perpendiculars from A to X and Y axes respectively. The intercepts on these axes are called the scalar components Rx and Ry.
Then, OP is Rx, which is the  magnitude of x component of Vector R and OQ is Ry, which is the magnitude of y component of Vector  R.
From ∆ OPA,
cos θ = OP/OA = Rx/R(or) Rx=Rcos θ
sin θ = OQ/OA = Ry/R (or) Ry=Rsin θ
R2 = Rx2 + Ry2
Also, Vector R can be expressed as Vector R = Rxi + Ryj where i and j are unit vectors.
In terms of Rx and Ry , θ can be expressed as θ = tan−1 [Ry/Rx] 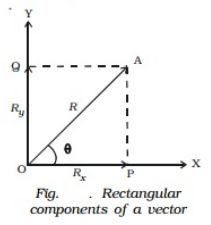 Unit vector: A vector having unit magnitude is called a unit vector. It is also defined as a vector divided by its own magnitude. A unit vector in the direction of a vector A

Thus, a vector can be written as the product of its magnitude and unit vector along its direction.


Dot product:
The geometric meaning of dot product says that the dot product between two given vectors  and bis denoted by:
a⋅b = a ∣∣ b ∣ cos
Here, |a| and |b| are called as the magnitudes of vector a and b and θ is the angle between the vectors a and b.
If the two vectors are orthogonal, that is,  the angle between them is 90, then a.b = 0 since cos 90 = 0.
If the two vectors are parallel to each other, then a.b =|a||b| since cos 0 = 1.


Dot Product of Two Vectors Properties
Given below are the properties of vectors: 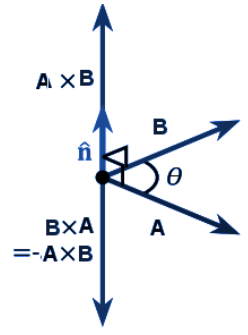 If θ is the angle between the given two vectors A and B, then the formula for the cross product of vectors is given by:
A x B = |A| |B| sin θ
Or, Vector A x Vector B = ||Vector A || ||Vector B|| sin θn^
Here, Vector A, Vector B are two Vectors.
||Vector A || ||Vector B|| are the magnitudes of given vectors.
θ is the angle between two vectors and n^is the unit vector perpendicular to the plane containing the given two vectors, in the direction given by the right-hand rule.


Cross product matrix:
We can also derive the formula for the cross product of two vectors using the determinant of the matrix as given below.
A = ai + bj + ck B = xi + yj + zk
Thus, 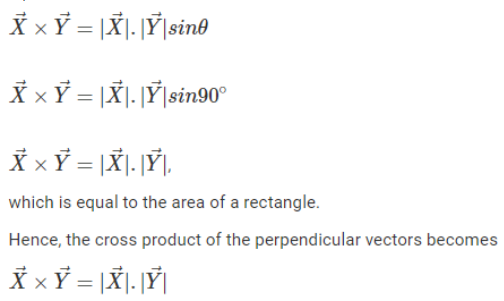 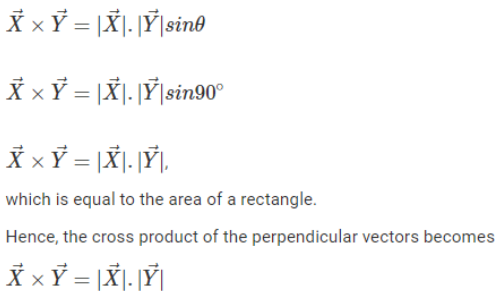 
In a Projectile Motion, there are two simultaneous independent rectilinear motions:


Time of Flight:- Let t be the time taken by the particle to go from A to B. In this time the displacement of the projectile to the plane is zero.
Hence, 0 = u sin (α-β) t - ½g β t2
=> t = 2u sin(α-β)/gcosβ
Range:-
During time of flight, the horizontal velocity u cos α remains constant.
Hence, horizontal distance,
OB = (ucosα) t = 2u2sin(α-β)cosα/gcosβ
Now, OA = OB/cosβ = 2u2sin(α-β)cosα/gcosβ
The greatest distance of the projectile from the inclined plane is u2sin2 (α-β)/2gcosβ .
Circular Motion:
Circular motion is the movement of an object in a circular path. 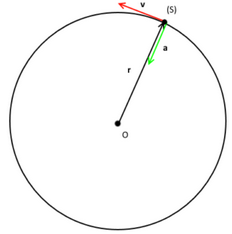