It is an agent that changes or tends to change the state of rest or of uniform motion of a body in a straight line.
Unit:N (newton)


(a) Law 1: Everybody remains at rest or continues to move with uniform velocity unless an external force is applied to it.
(b) Law 2:
Gives relation between force and acceleration
i.e

Newton’s second law : F = ma
Where F  is the resultant impressed force and a is the acceleration
In, the quantity m is called “inertial mass” of body
(c) Law 3: When a body A exerts a force on another body B, B exerts an equal and opposite force on A. If one of these two forces is considered as action, then other will be reaction.

(a) Normal force: Normal to the surfaces of contact and towards the body under consideration.

(b) Weight of body: Equals to Mg and acts vertically downward.
(c) Tension in string: Along the string, away from the body under consideration.


Unless stated otherwise, pulleys and strings are massless
(i) When unequal masses m1 and m2 are suspended from a pulley

On solving equations, we get

(ii) When a body of mass m2 is placed frictionless horizontal surface, then

(iii) When a body of mass m2 is placed on a rough horizontal surface, then

(iv) When two masses m1 and m2 are connected to a single mass M as shown in figure, then

(v) Motion on a smooth inclined plane, then

(vi) Motion of two bodies placed on two inclined planes having different angle of inclination, then

5. Stepwise Procedure to Solve Questions Based On Motion Of Connected Bodies

Thus for a frame of reference with angular velocity ω, the pseudo force is mω2r which is away from the centre. We say then that a centrifugal force mω2 r acts on the body, when viewed from the rotating frame.

It consists of a string whose upper end is fixed and bob is tied at the other free end. The string traces the surface of the cone, the arrangement is called a conical pendulum. 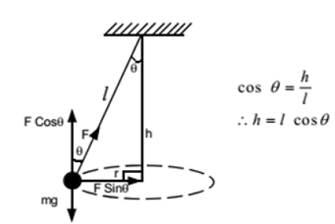 8.Apparent Weight in a Lift

(i) When a lift is at rest or moving with a constant speed, then

The weighing machine will read the actual weight.

(ii) When a lift is accelerating upward, then apparent weight

The weighing machine will read the apparent weight, which is more than the actual weight.

(iii) When a lift is accelerating downward, then apparent weight

The weighing machine will read the apparent weight, which is less than the actual weight.

(iv) When lift is falling freely under gravity, then

The apparent weight of the body becomes zero.

(v) If lift is accelerating downward with an acceleration greater than g, then body will lift from floor to the ceiling of the lift.

Frictional forces are produced due to intermolecular interactions acting between the molecules of the bodies in contact.

(a) Static frictional force: Self adjusting force having magnitude less than or equal to μs N.

It has value equal to μkN.

Kinetic friction is of two types:

As, rolling friction < sliding friction, therefore it is easier to roll a body than to slide.

where μk = coefficient of kinetic friction and R = normal reaction.

Angle of repose or angle of sliding It is the minimum angle of inclination of a plane with the horizontal, such that a body placed on it, just begins to slide down.

If angle of repose is a. and coefficient of limiting friction is μ, then