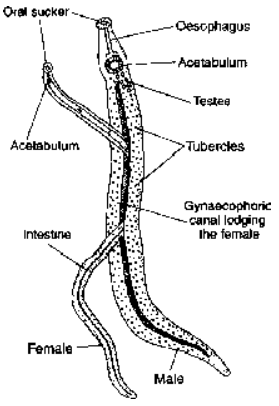 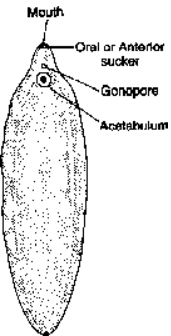 The adults of Taenia solium are parasites in the small intesine of human beings (Primary host) & its larva infests the muscles of the pig (secondary host).

The body is divisible into three parts :

Scolex : At the apex is a prominent mobile cone, the rostellum which is armed with 22 to 32 curved chitinous hooks, arranged in two rows around its base, one row is of larger hooks & other row is of small

hooks. Both types of hooks alternate with each other. The scolex also bears four hemispherical, highly muscular suctorial organs, the true suckers. The suckers are devoid of hooks or spines. The suckers &

hooks are the organs of attachment. They don’t play any role in catching food.

Neck : It is a small narrow undifferentiated part behind the scolex. Its hinder end (area of segmentation) adds new segment to strobila.

Strobila : It consists of 800-1,000 segments or proglottids. The anterior proglottids are immature & have no reproductive organs; from about the 200th proglottids, the male organs are formed. From about 250th

gravid segment usually detach one by one from the body & pass out with the faeces of the host-the phenomenon is known as Apolysis.

Body wall : The outermost covering of the body is the cuticle. Below cuticle lies a basement membrane which separates the muscular layer and parenchyma from the cuticle. In the subcuticular region there are

circular and longitudinal muscles. The parenchyma is made up of loosely arranged parenchymatous cells. Gland cells are also found in between muscles. These gland cells secrete the protective secretion against the digestive enzymes.

Digestive system is totally absent; they absorb nutrients through their body wall. Respiration is anaerobic; excretion is through flame cells.

Male organ include numerous testes of many small lobes lying scattered in the greater part of the proglottids towards the dorsal side; efferent ducts arise from the testes & unite to open into a convoluted vas deferens  which passes through a cirrus surrounded by cirrus sac. The cirrus opens by the male genital pore.

It commonly known as beef tapeworm where the intermediate host is cow, buffalo and sheep. Rostellum hooks are absent. It is longer than T. solium and it is the commonest tape worm.

Echinococcus granulosus : It is commonly known as dog tapeworm or hydatid tapeworm. It is an endoparasite in dogs, cats, fox and other carnivores. It is the smallest tapeworm. It has well developed scolex

with four suckers & rostellum with a double row of hooks.

They are well adapted for anaerobic respiration

They are mostly ehrmaphrodite which ensures copulation. They also produce large number of eggs.

Organ of adhesion : They have well-developed suckers, hooks and spines.

Body covering - made of thick tegument.