(i) Body lacks head and parapodia.

(iii) Clitellum is developed during the breeding season.

It is sanguivorous, segmented animal. It is ectoparasite on cattle and humans.

The body is divisible into 33 segments. Each segment may further be divided into rings or annuli.

The segments 9, 10, and 11 develop a temporary clitellum during breeding season. The leech bears two suckers.

The anterior sucker encloses the mouth. It acts as a feeding and prehensile organ.

The posterior sucker lies at the hinder part of the body. It helps in locomotion.

There are present five pairs of eyes on the dorsal surface.

Anus is a small opening, situated on the dorsal side at the junction of the main body and the posterior sucker.

Male genital aperture is situated between the second and third annuli of the tenth segment.

Female genital aperture lies on the ventral side of the 11th segment.

Seventeen pairs of nephridiopores are situated on the last annulus of each segment from 6 to 22.

Locomotion occurs by looping and swimming. The animal possesses an anticoagulant hirudin. Coelom is filled with botryoidal tissue. It is excretory in function. 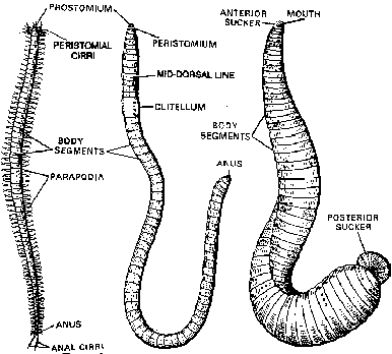 In earthworm, a seta is connected to a pair of protractor muscles (for ejection) & a single retractor muscle (for retraction).

Hydraulic skeleton. Coelomic fluid present in the body of annelids provides strength to the body & functions as a hydraulic pump for locomotion. It is, therefore, also known as hydraulic

Tubifex is commonly known as blood worm because of its bright red colour.