Magnetic Flux : The magnetic flux linked with any surface is equal to total number of magnetic lines of force passing normally through it. It is a scalar quantity.

Suppose, we consider small area dA in field B, then φ = ∫ B. dA

The phenomenon of generation of current or emf by changing the magnetic flux is known as Electromagnetic Induction EMI).

First Law :  Whenever magnetic flux linked with the closed loop or circuit changes, an emf induces in the loop or circuit which lasts so long as change in flux continuous.

where, N = number of turns in loop.
Negative sign indicates the Lenz’s law.

Lenz’s Law : The direction of induced emf or induced current is such that it always opposes the cause that produce it.

If N is the number of turns and R is the resistance of a coil. The magnetic flux linked with its each turn changes by dФ in short time interval dt, then induced current flowing through the coil is

6. If induced current is produced in a coil rotated in a uniform magnetic field, then

where, I0 = NBA ω/R = Peak value of induced current
Motional emf : The potential difference induced in a conductor of length l moving with velocity v, in a direction perpendicular to magnetic field B is given by
ε = ∫ (v x B) dl = vBl 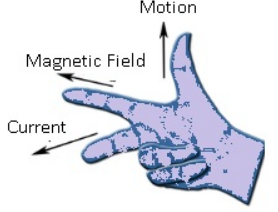 The induced emf:  developed between two ends of conductor of length l rotating about one end with angular velocity ω in a direction perpendicular to magnetic field is given by,
ε = Bωl2/2

The induced emf can be produced in a coil by