Bohr's Model Of An Atom

Limitations of Bohr’s Model of an Atom

Consider an electron of mass ‘m’ and charge ‘e’ revolving around a nucleus of charge Ze (where, Z= atomic number and e is the charge of a proton) with a velocity v and r is the radius of the orbit in which the electron is revolving.

For an electron orbiting in a hydrogen atom the necessary centripetal force is the electrostatic force of attraction between the negative electron and the massive, positively charged proton that is the nucleus.

According to Bohr’s postulate of angular momentum quantization, we have

The greater the value of n, farther is the energy level from the nucleus, and greater is the radius of the orbit.

Calculation of Velocity of an Electron

Radius of the nth orbit, r =

Substituting value of r in equation (4)

Velocity of the electron in the nth orbit is given as

Velocity of electron in the first orbit of hydrogen atom is

Calculation of energy of an electron

The total energy E of an electron is the sum of kinetic energy and potential energy.

Kinetic energy of an electron =

[Putting the value from equation (1)] 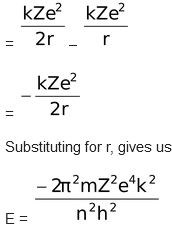 This expression shows that only certain energies are allowed to the electron.

Since this energy expression consist of so many fundamental constant, we are giving you the following simplified expressions.

1 electron volt is defined as the amount of energy gained by an electron when it accelerates through a field of 1V.

If any students need to take the online test to check their concepts or undertstanding then they can visit Online Test Atomic Structure.