Nernst equation is used to relate either half−cell potential or emf of a cell with the concentration of the related species. Let us first consider a redox change occuring in a electrochemical cell,

where A, B, C and D are the reagents whose concentrations varies i.e. they are either gases or in solution phase. For reagent A, the free energy per mole of A may be given thermodynamically as

Similarly, for all other reagents, 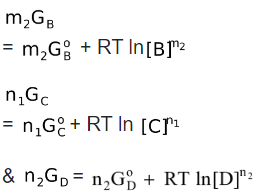 Now, the free energy change for the overall cell reaction can be deduced as

where ΔG° is the free energy change when all the reactants and products are present at concentrations equal to 1 M.

Any spontaneous reaction occuring in a cell, occurs with a decrease in free energy. This decrease in free energy brings in an equivalent amount of electrical work obtainable from a given system over and above any PdV energy that can be delivered to the surrounding. This can be calculated by the total charge driven through cell and the potential difference. Thus

[Negative sign indicates decrease of free energy and it implies that as Ecell becomes more and more positive, the ΔG will become more and more negative, making the reaction spontaneous]

Therefore, equation (i) can be written as

Dividing both the sides by nF gives,

The equation (ii) is called Nernst equation, which is applicable to half cell reaction as well as to complete cell reactions.

(c2)⏐Cu(s) assumes that Zn is the anode and Cu is the cathode. Such an assumption would be true only if the cell potential (Ecell) is positive. The cell potential is given in the following three ways of which we would choose the first one in all our problems.

Now, let us see, how to find the EMF of Daniel cell using Nernst equation. Since we need to represent the reduction potential of cathode and anode, we first need to write the relevant reduction reactions. 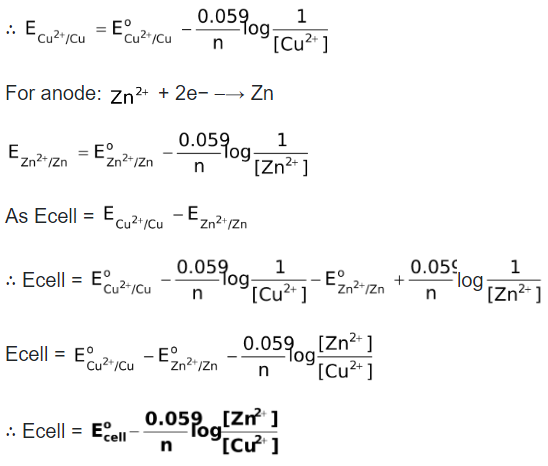 Note: Since Ecell  has been defined as

, the Nernst expression holds good even if the number of moles of electrons of the two half reactions are different.

For example, consider the cell, 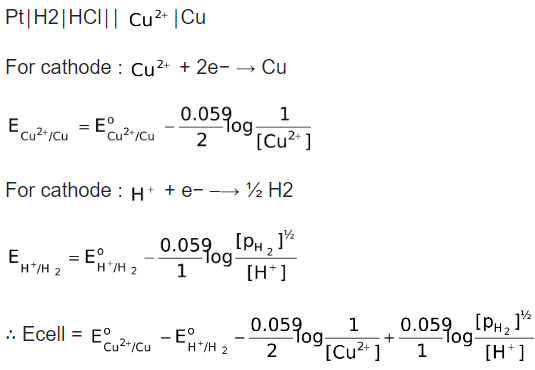