Chloroplasts were first observed by N. Grew (1682) but were studied by Dutrochet (1837), Sachs, Mayer and then by Schimper. 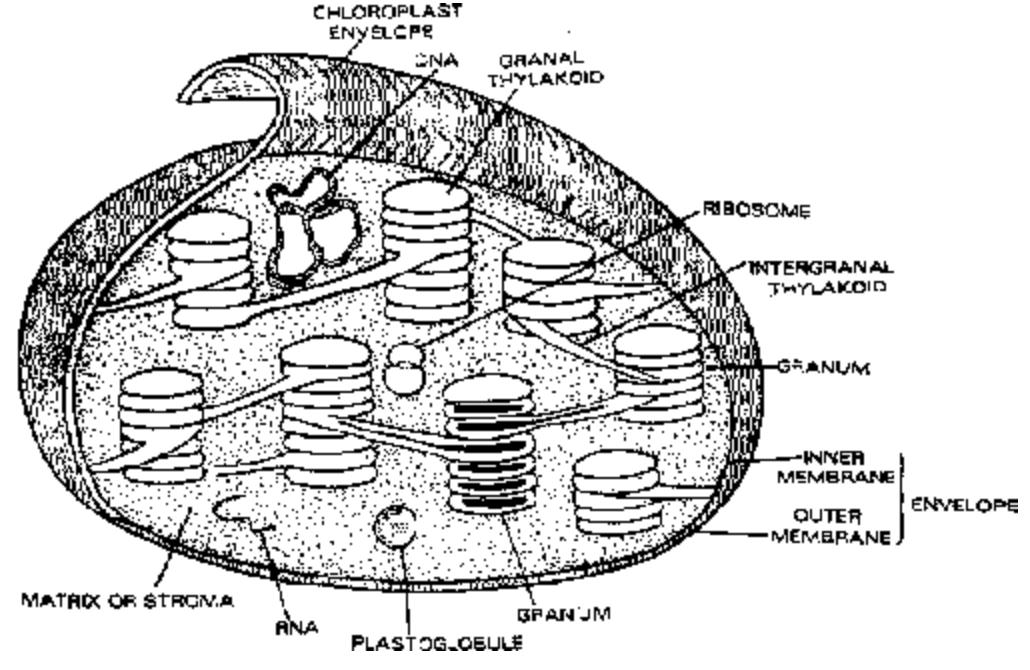 Matrix or Stroma. It is a protein colloidal complex that fills the interior of the chloroplast. In the matrix are embedded a number of granules, enzymes, DNA, mRNA, tRNA, rRNA, ribosomes.  Ribosomes are 70S type.  Thylakoids are structural and functional elements of chloroplasts which are embedded throughout in the matrix or stroma. Each thylakoid is a flattened sac lined by a membrane specialised in harvesting light energy.  Thylakoid membranes are about 7 nm thick while the loculus or lumen can be 5 - 70 nm in width.  In Red Algae, thylakoids occur singly. In green algae, thylakoids occur in groups of 2-20. The grouped thylakoids are called lamellae. Grana are closely packed stacks of disc-shaped thylakoids. 40 - 100 grana are found in chloroplast.  Thylakoids present in a granum are called granal thylakoids. Grana are connected to one another by means of stroma thylakoid or intergranal lamellae or frets.

Photosystem I The pigment system (light harvesting system) is more abundant in membranes of stroma thylakoids and non-appressed parts of granal thylakoids.

Photosystem II The pigment system is more abundant in the appressed parts of granal thylakoids.

ATP-Synthetase It is most commonly present in non-appressed membranes of granal thylakoids and in stroma thylakoids.