Chloroplasts have two types of photosynthetic pigments, chlorophylls and carotenoids. Bacteria possess bacteriochlorophylls instead of chlorophylls.  Phycobilins occur in some algae.

Chlorophyll a : The chlorophyll a has molecular formula as C55H72O5N4Mg and the molecular weight is 893.  The molecule is distinguishable into a ‘head’ of size 15 x 15 Å and a ‘tail’ of 20 Å length.  The ‘head’ is made up of porphyrin, a tetrapyrrole closed ring derivative and the ‘tail’ of phytol (C20H39OH).  There is a 5th isocyclic ring of cyclopentanone. A non-ionic magnesium atom is held within tetrapyrrole ring by two covalent and two co-ordinate bonds.  The chlorophyll a absorbs blue, yellow and red wavelengths of the spectrum. 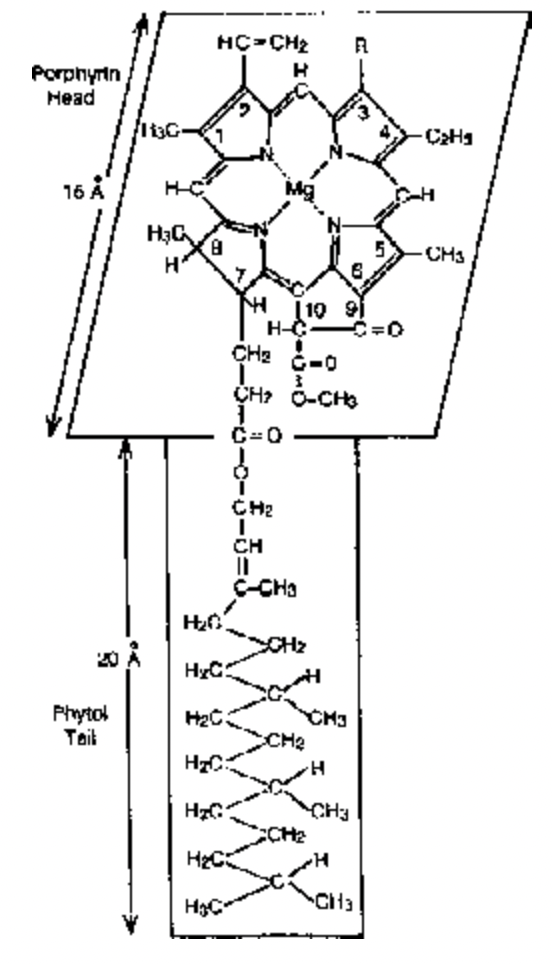 Fig. Chemical structure of chlorophyll a

Chlorophyll b : Its molecular formula is C55H70O6N4Mg and the molecular weight is 907.  It is similar to chlorophyll a except in having a formyl (CHO) group instead of methyl (CH3) at carbon-3 position of the second pyrrole ring.  It absorbs blue and red wavelengths.

Chlorophyll c : Its molecular formula is probably C35H32O5N4Mg and the molecular weight is 721.  It is found in brown algae, diatoms and also in Pyrrophyta and Cryptophyta.

Chlorophyll d : Its molecular formula is C54H70O6N4Mg the molecular weight is 895.  It absorbs blue, yellow and red wavelengths of light. It is reported in red algae.

Chlorophyll e : The molecular formula and structure of this chlorophyll is not known.  It has been reported from Xanthophyta.

Carotenoids : The carotenoids are unsaturated polyhydrocarbons.  Light is not necessary for their biosynthesis.  The carotenoid pigments include two classes of compounds namely carotenes and xanthophylls.

(i) Carotenes : Since they were first isolated from the roots of carrot by Wakenroder, hence the name carotene. These are orange coloured pigments having empirical formula as C40H56 and molecular weight, 536.  They are found in all groups of plants i.e., from algae to Angiosperms. The -carotene on hydrolysis produce vitamin A hence the carotenes are also called provitamin A.

(ii) Xanthophylls : They are yellow coloured carotenoid also called xanthols or carotenols. These are oxygen containing carotenoids and are more abundant in nature.  The ratio of xanthophyll to carotene in nature is 2 : 1 in young leaves.  The most common xanthophyll in green plants is lutein (C40H56O2).  In brown algae the brown pigment is fucoxanthin. 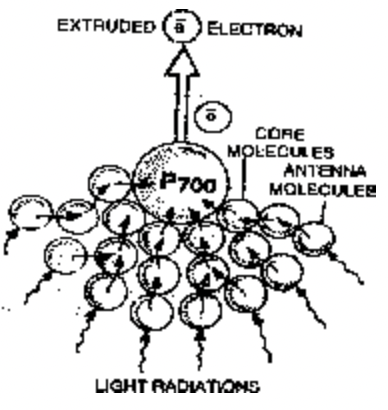