(a) Photolysis of H2O : It is breaking up of H2O into hydrogen and oxygen in the illuminated chloroplasts.  A small complex of protein is attached to phytosystem II.  It is called oxygen evolving complex (OEC). OEC centre oxidises H2O into oxygen, H+ and electrons. Cl–, Ca2+ and Mn2+ is required during this process.

(b) Production of Assimilatory power : The electrons released during photolysis of H2O are picked up by reaction centre (P680) of Ps II.  On receiving a photon of light energy P680 expels an electron.  It is primary reaction of photosynthesis which involves conversion of light energy into chemical energy (Quantum conversion). The electron extruded by P680 is picked up by pheophytin, from where electron passes over a series of carriers. While passing over cytochrome complex, the electron loses sufficient energy for creation of proton gradient and synthesis of ATP (Photophosphorylation). From plastocyanin the electron is picked up by trap centre (P700) of PS I. Electron is expelled by P700.  Which is picked up by FeS, ferredoxin and NADP - reductase. NADP reductase gives electrons to NADP+ for combining with H+ ions to produce NADPH.

It was proposed by Mitchell (1961). Proton gradient develops in the outer chamber or intermembrane space of mitochondria and inside the thylakoid lumen in chloroplast during electron transport, both in respiration and photsynthesis. Three main events occur :

The consequences of the three events is that concentration of protons decreases in matrix or stroma region while their concentration in thylakoid lumen rises resulting in decrease in pH. A proton gradient develops across the thylakoid. The proton gradient is broken down due to movement of protons through transmembrane channels, CF0 of  ATPase (CF0 – CF1 particle). The rest of the membrane is impermeable to H+. CF0 provides faciliated diffusion to H+ or protons. As protons move to the other side of ATP. They bring about conformational changes in CF1 particle of ATPase or coupling factor. The transient CF1 particle of ATPase enzyme from ATP from ADP and inorganic phosphate 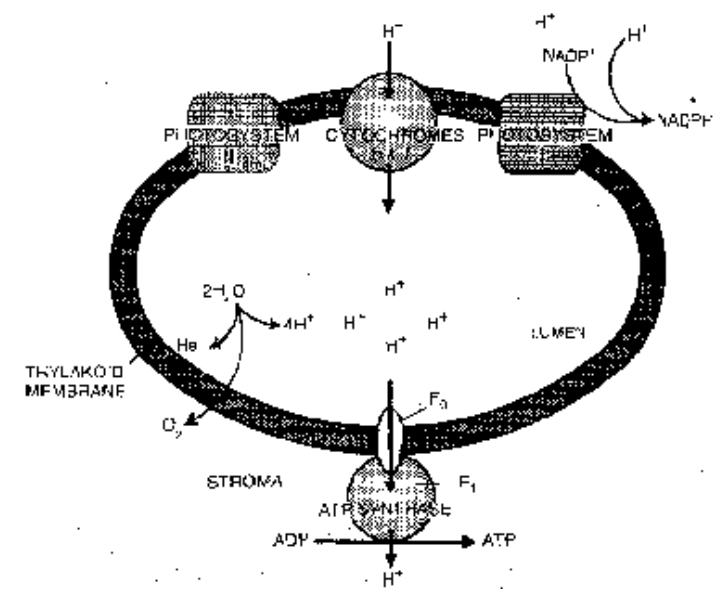 It does not require light.  During this reaction or biosynthetic pathway assimilatory power is used in fixation and reduction of CO2. The enzymes required for this reaction are present in matrix of chloroplast.  There are two main pathways C3 or Calvin cycle and C4 or dicarboxylic acid cycle.