Translocation Of Solutes and its conditions

A plant prepares food through its leaves. The leaves act as ‘supply end’ or source.  It is then translocated to various parts of the plant body such as roots., tubers, fruits and other storage regions.  These regions act as consumption end or sink.

Czapek found that phloem is the pathway of translocation of organic nutrients.

Malpighi performed girdling or ringing of stems.  A narrow ring of bark is removed below the foliage.  Bark swells up above the ring.  It may also develop adventitious roots.  The swelling is due to accumulation of nutrients above the ring. This experiment proves that nutrients pass through phloem and not through the xylem. 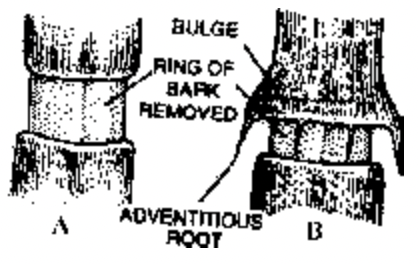 Fig. Girdling of tree trunk to show that organic nutrients accumulate in the bark above the girdle where a bulge is also produced

Autoradiography : Leaves were fed with radioactive .  Sections were cut and autoradiographs were prepared. It was found that transport occured through the sieve tubes.

Transported solutes : The food is generally translocated as carbohydrate.  The most dominant carbohydrate is sucrose. In some plants phloem sap contains raffinose, stachyose and mannitol.

Several theories have been proposed to explain the mechanism of food translocation.

B. Protoplasmic streaming hypothesis : It was proposed by Hugo de vries.  According to this theory the food is transported across by streaming current of protoplasm.  This hypothesis explains the bidirectional movement of metabolites across a single sieve element.

C. Electro - osmotic hypothesis : This theory was proposed by Spanner.  According to him the solute particles move electro-osmotically across the sieve plate through sieve pores.

It was first proposed by Hartig and later modified by Munch. According to this hypothesis organic substances flow in solution form in the sieve elements due to development of pressure gradient between source and sink ends.

In plants, organic nutrients are synthesised in the mesophyll cells.  From these cells nutrients enter into sieve tube elements which absorb water from the near by xylem elements.  It produces a high turgor pressure that causes flow of nutrient solution in the sieve elements, towards the region where turgor pressure is low.  In the sink region water moves back to xylem as O.P. is low due to utilisation of food or conversion to starch, therefore low T.P. is maintained at the sink end.